BHP No. 4 did arrive though with the classic US bell mounted atop the boiler. The bell was soon removed and subsequently presumed lost. However, it was found many years later at the Iron Knob Primary School where it had served as the school bell after removal from the locomotive.  Today, it is back adorning BHP No. 4. 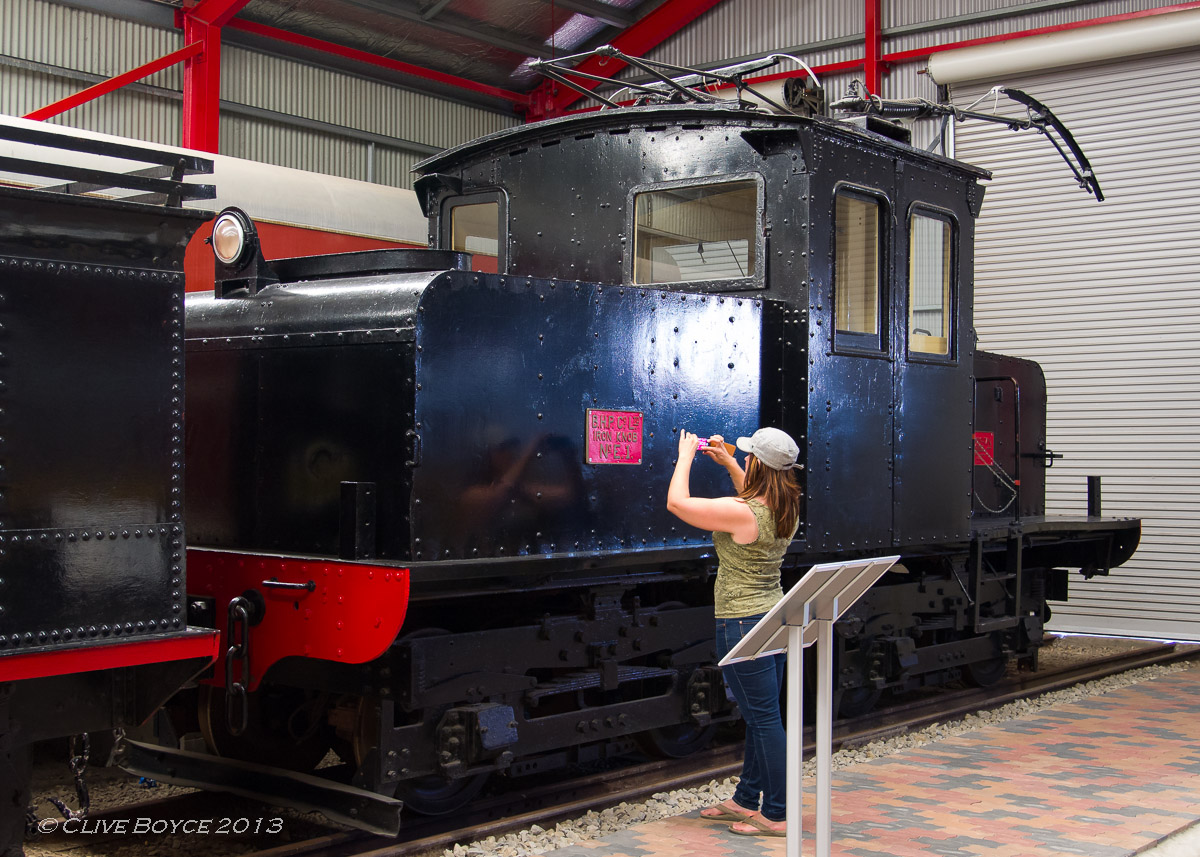 Until this visit, I was completely unaware that any of South Australia’s railways were electrified. But BHP Limited at its Upper Spencer Gulf iron ore operations used a small fleet of narrow gauge electric locomotives both within the open cut mines and down at the Whyalla smelters. They were also used at BHP’s Rapid Bay limestone quarry which supplied limestone to the steel making facilities at Whyalla. BHP No. E1 and the next three in the class were built by Metropolitan Vickers Electrical Co. Ltd. of Manchester and Sheffield, England. Later, another four units were built locally in South Australia. No. E1 operated from 1928 -1968.

Across Spencer Gulf from BHP’s iron ore operations, the Broken Hill Associated Smelters company operated the Port Pirie lead smelter. This facility processes all of the lead/silver/zinc ore hauled down by rail from Broken Hill.  The company privately owned a couple of miles of sidings within the smelter and alongside the shipping wharves.  After the end of the First World War, four 0-6-0 narrow gauge tank locos built for the British War Department were acquired and shipped to the smelters, having been declared surplus. One of the four locomotives “Peronne” came to the museum in 1964.  In the mid-1980’s, a four year project saw Peronne brought back to operational condition.  A short section of narrow gauge track has been laid within the Port Dock yard and Peronne is fired up and run on a regular basis. 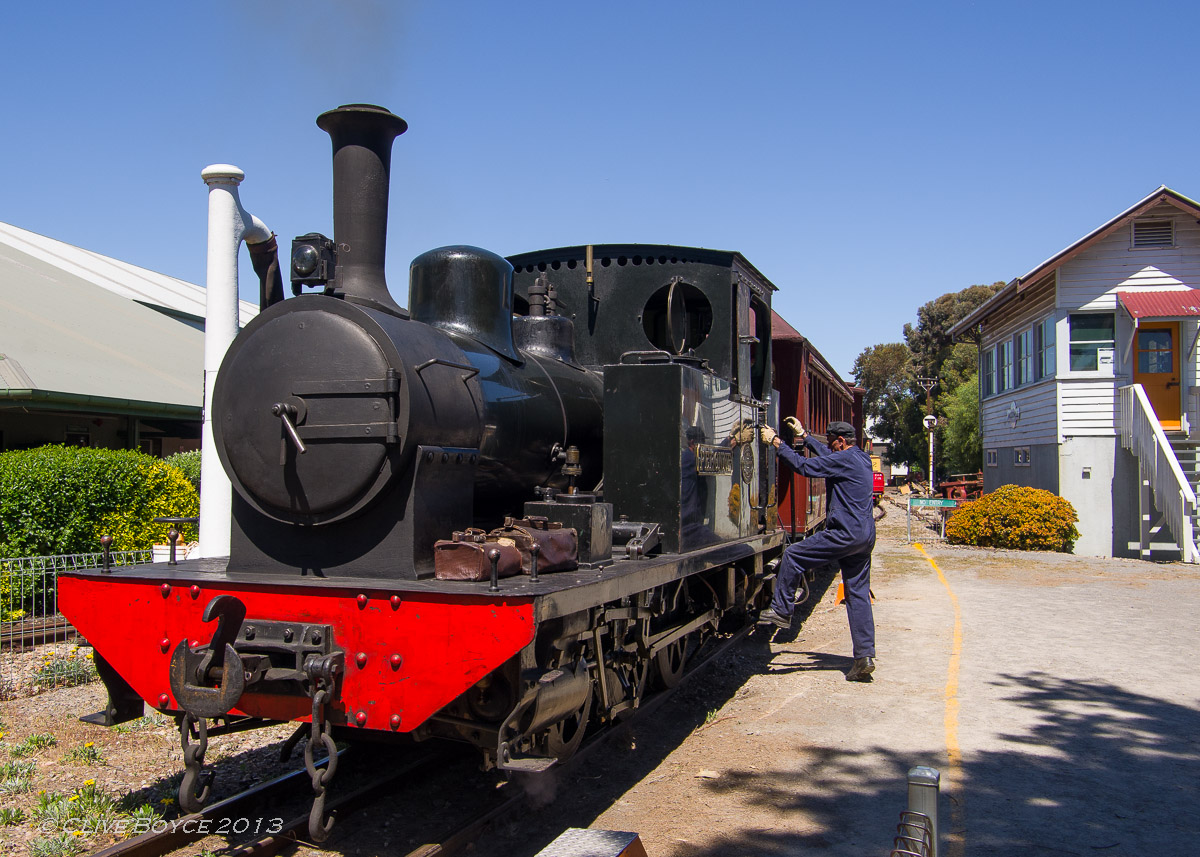 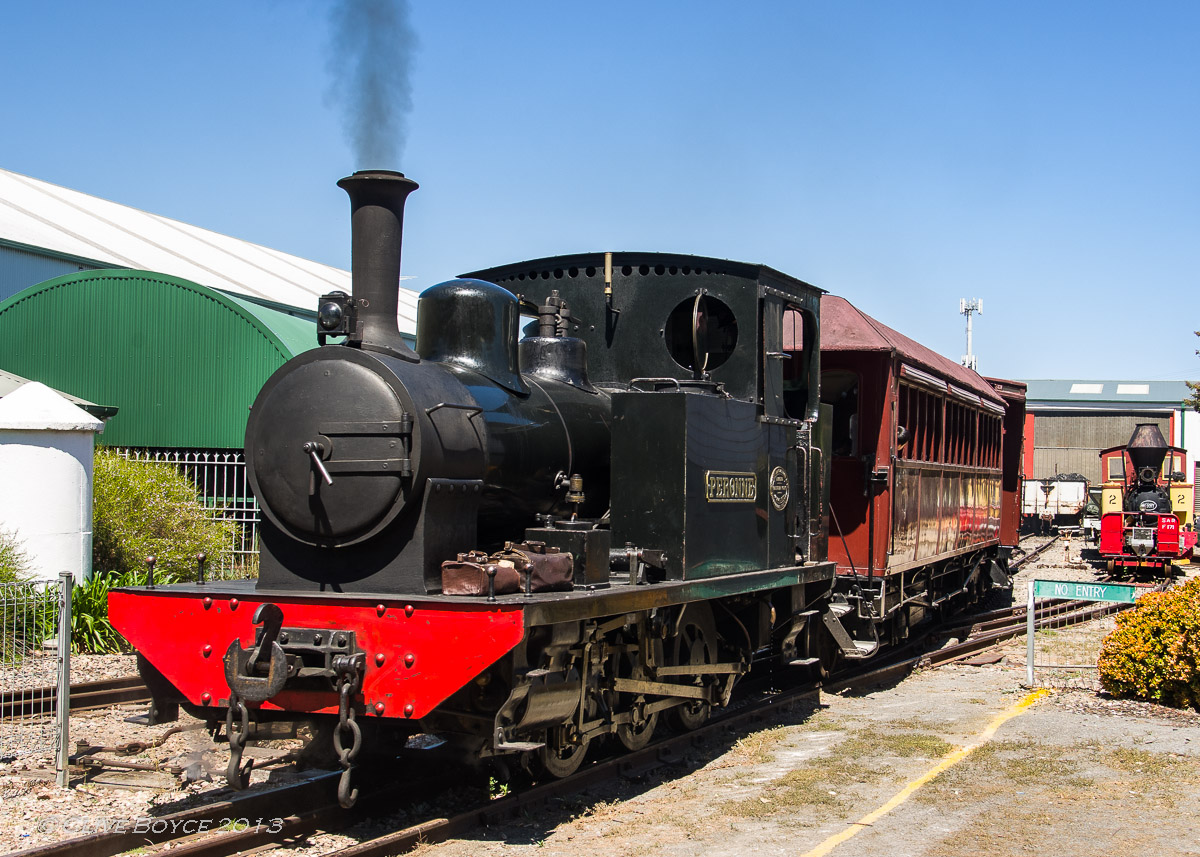 The South Australian Railways (SAR) wasn’t the only government railway operating within South Australia. The Commonwealth Railways (CR) operated the Port Augusta to Alice Springs narrow gauge line, on which ran the famous Ghan passenger service. Commonwealth Railways also built and operated the standard gauge Trans-continental line across to Western Australia through the vast Nullabor Plains.  Built during the First World War, the line still retains the distinction of having the longest section of dead straight track in the world, measuring 478 kilometres or 297 miles without a bend.

The NM Class was the main source of locomotive power on the Alice Springs line from 1925 through to dieselisation in the 1950’s.  The 4-8-0 NM Class was a direct copy of a Queensland Railways design.  The Pichi Richi Railway Preservation Society regularly operates a NM class locomotive on its heritage railway from Port Augusta to Quorn on a section of the original Port Augusta – Alice Springs line. 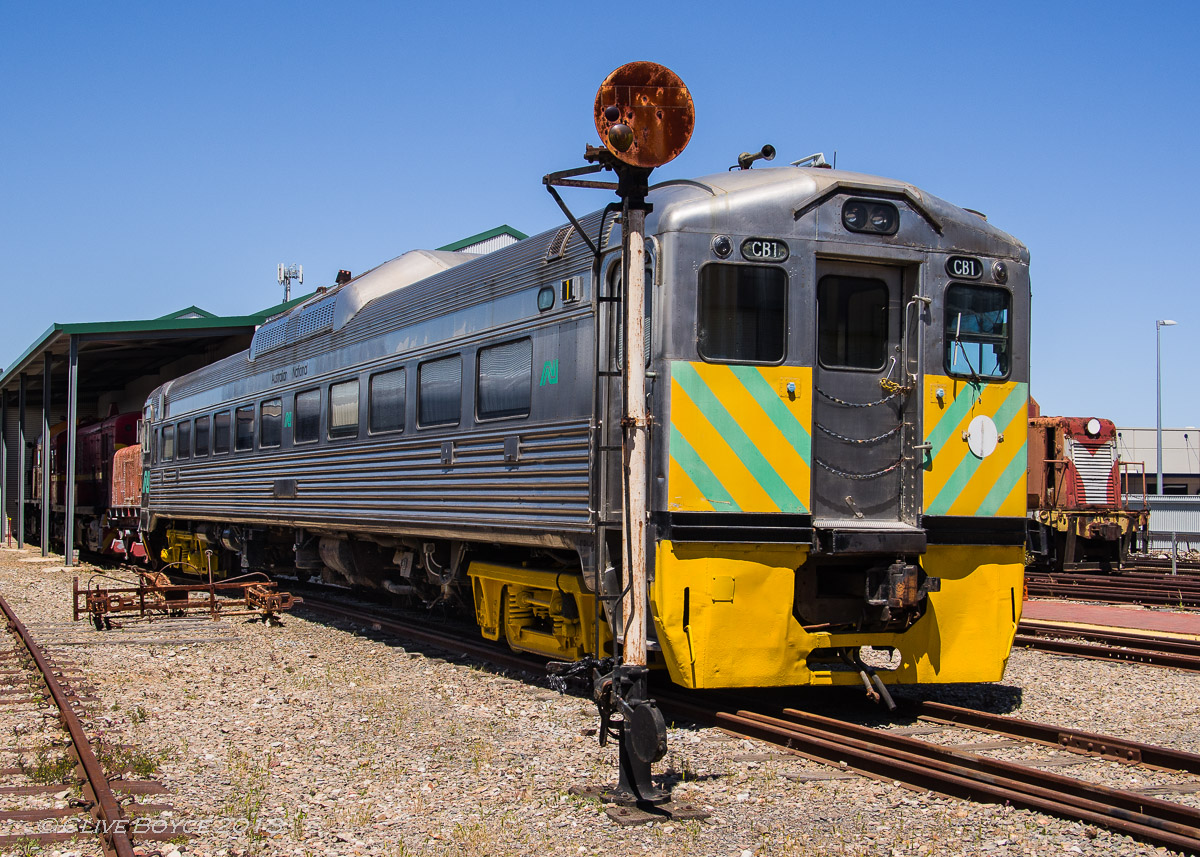 After the Second World War, the Commonwealth upgraded the passenger services to the remote South Australian towns located beside the Alice Springs and Trans-continental tracks. Three US built Budd rail cars were imported in 1951 and ran from Port Augusta/Port Pirie to Woomera, Tarcoola and Marree. The Budd cars introduced air-conditioning which would have been most welcome – summer temperatures in these remote northern areas can easily get to 48-49ºC (118-120ºF). The cars were withdrawn in 1976 but later made a brief reappearance as the Iron Triangle Limited running from Adelaide to Whyalla after the Adelaide to Port Pirie line was converted to standard gauge in the mid 1980’s. However, South Australian country rail services were on their last legs by this stage and the cars were withdrawn from service for a final time at the end of 1990. 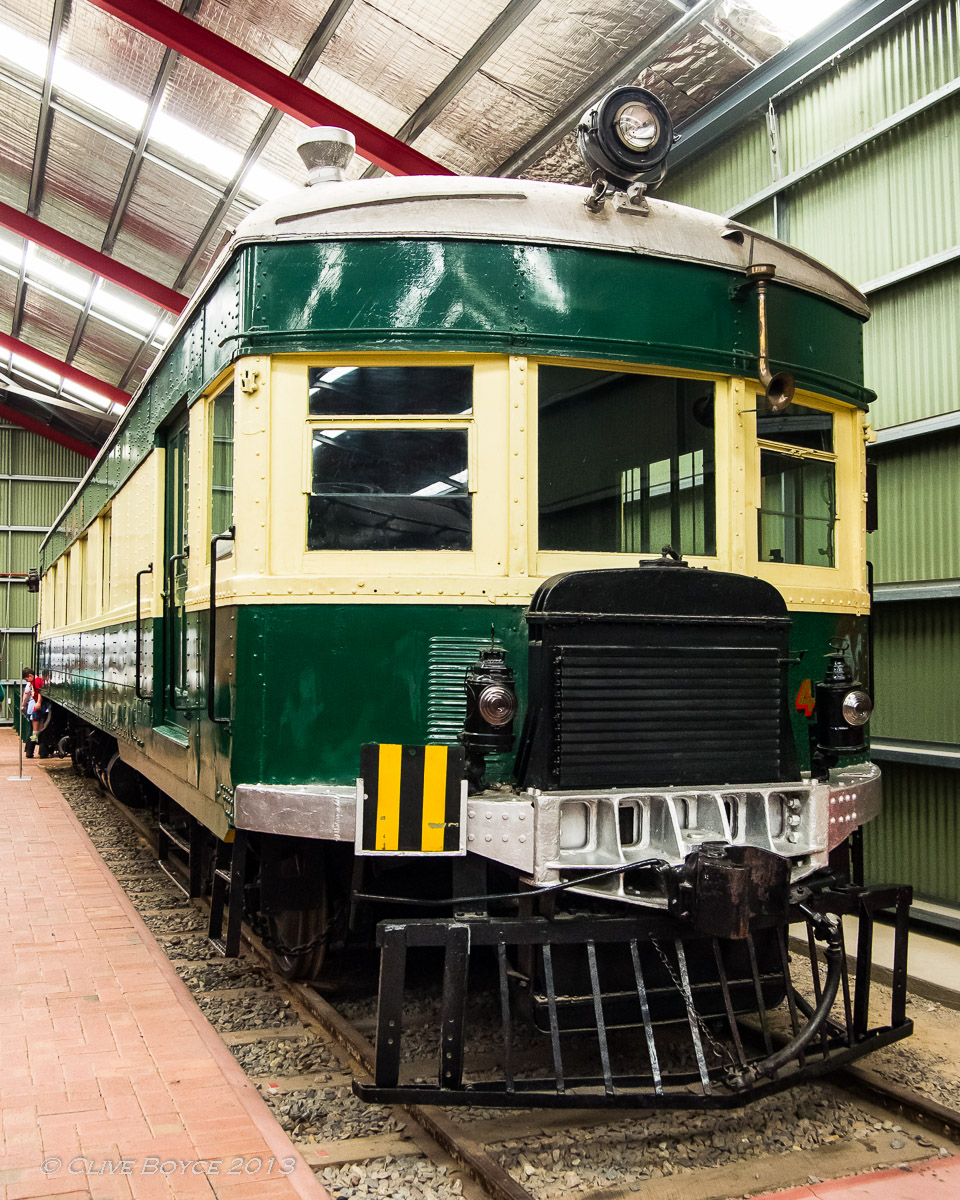 I’ve written in Part 2 of this series about the dramatic changes within the South Australian Railways that came with the arrival of William Webb in 1924 as the new Commissioner of Railways. In addition to re-powering the main line steam services, Commissioner Webb also imported a dozen Brill 55 Class rail cars from the US.  These were the first rail cars in South Australia and worked many of the secondary country lines. Later, they were relegated to suburban duties.  They were known for the note of their horns, being dubbed the “Barwell Bulls”, and also for their rough ride.  In 1928, the 55 Class fleet was supplemented by 39 of the larger 75 Class.  The Brills worked through to 1971 when a final service to Victor Harbor was run.  Seen here is Rail Car No. 41, one of the 75 class. The Steamranger Heritage Railway has an fully operational Brill rail car that can sometimes be seen running between Goolwa and Strathalbyn.

In the 1950’s, the South Australian Railways introduced to the State’s regional passenger services a far superior rail car to the Brills. The Bluebird series were smooth, quiet and one of the first rail cars in Australia to offer air conditioning. Each was named after a native bird, No 252 seen here was named “Blue Wren”. After retirement from service with South Australia Railways and later Australian National, several Bluebirds were used for tourist operations. Three Bluebirds operated the Barossa Wine Train from Adelaide to Tanunda up the broad gauge track that serviced the limestone mine at Angaston. No 252 was renamed “Merlot” for this service. But when this line deteriorated to a level unfit for passenger service (although still ok for limestone haulage), the Wine Train stopped operating and its Bluebirds have since been sitting forlornly at several locations. It appears they have now turned up at the National Railway Museum, where they are at least thankfully safe from vandalism.  I remember travelling on a Bluebird from Adelaide to Port Pirie somewhere around 1969 to see the last of the steam trains operating down the centre street of Port Pirie (as part of a Cub Scout day out – my Cub Scout leader being a mad keen train enthusiast).

Introduced at the same time as the Bluebirds, the 300 and 400 class rail cars were built for Adelaide’s suburban passenger network where they continued in operation until the mid 1990’s. These rail cars were immediately nick-named “Red Hens”, a name that has stuck to this day.  The museum has a couple of beautifully restored and operational Red Hens that take museum visitors for short rides within the Port Dock rail yard limits. Occasionally they operate on the Adelaide-Outer Harbor passenger line, ferrying visitors from the Adelaide Railway Station down to the museum.

Inside a Red Hen.  Rather noisy things, they’re powered by a pair of 6 cylinder diesels mounted below the floor. Each diesel is coupled to a bogie via a two speed torque converter transmission and a propeller shaft.  With only two gears to cover the rail cars’ speed range, the motors revved pretty hard just before the change up from first to second and again as the cars got to about 80 km/h  (50mph) or so.  This behavior gave the Red Hens great character though. Also, on a hot day, passengers would leave the doors open to introduce some cooling breezes into the interior. If on a busy summer evening commuter service out of the city, you would be hanging off a strap just a few feet from the open door as the Red Hens rocked along the faster sections of the suburban network. Modern risk managers and liability assessors would have a fit. But that was the way it was. I don’t remember hearing of anybody ever falling out of a Red Hen.

The restoration has even managed to source original advertising cards that were inserted into channels above the side windows. It’s been a long time since Adelaide used six digit phone numbers! 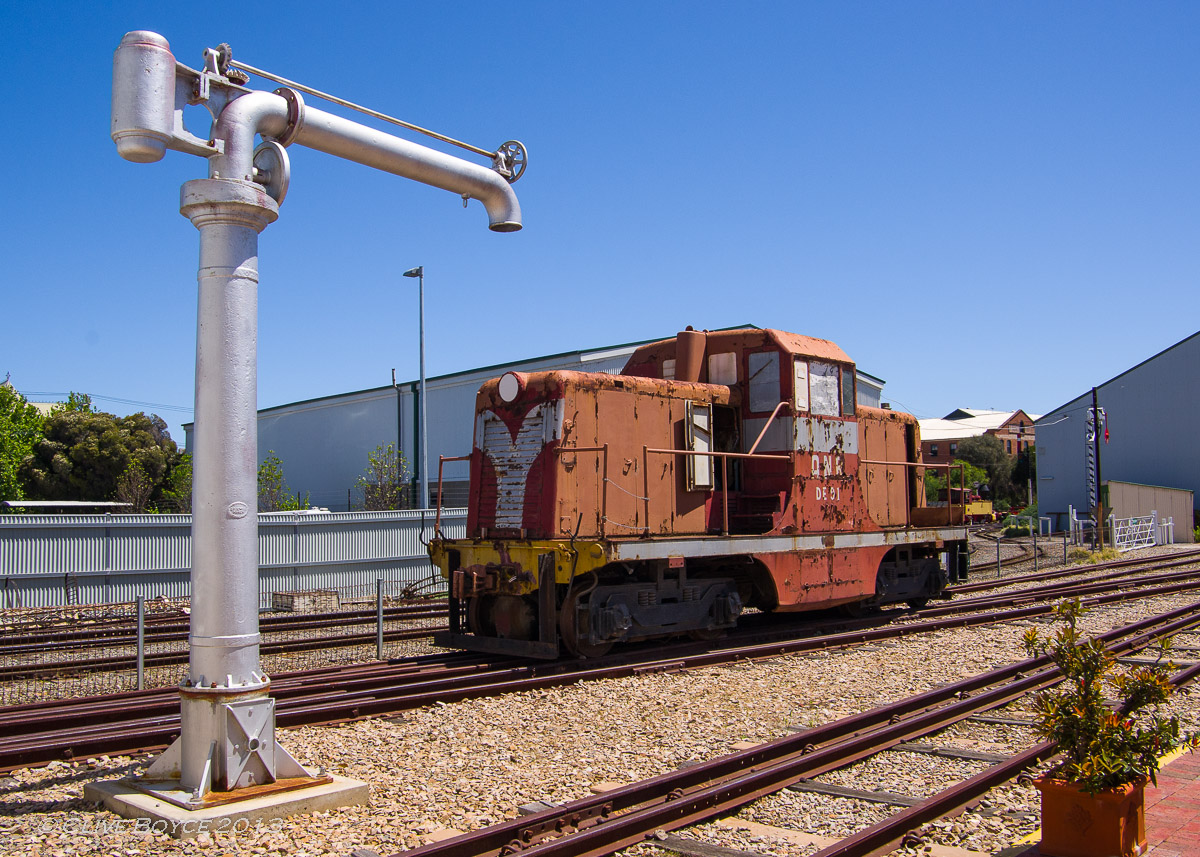 With these images I finish my exploration of the Australian National Railway Museum.

In preparing these posts for publishing, I’ve learnt a great deal about the history of South Australia’s railways and the important economic development role they played both in colonial days and in the period after Australia’s Federation. The museum has done an excellent job preserving this critical part of the State’s history.  I hope you have enjoyed your own ‘virtual visit’ via Photo Morsels.

As with the other National Railway museum posts, I was using my Pentax K-x with a FA20-35 F4 zoom.

More information about the National Railway Museum and its collections can be found at its website here.  The museum is open every day from 10am – 5pm.  I also recommend checking the website for special event days. The museum is located in Lipson Street, Port Adelaide, South Australia.  It is adjacent to the South Australia Aviation Museum. If wishing to use public transport, buses from the city centre running down Port Road to the Port will get you there, or take the Outer Harbor train service and alight at the Port Adelaide railway station.

Other posts about the National Railway Museum:

← Back to the Photo Morsels home page.

3 thoughts on “National Railway Museum (Part 3 – Everything Else)”