Gunung Machinchang? What’s that you say?

Well, to cut straight through the suspense, Gunung Machinchang is a mountain peak and the dominant feature of the western end of Langkawi island. It is also the subject of this second post in a photo series featuring images from a recent holiday to Malaysia.

Destination for the first week away was Langkawi which is located on Malaysia’s west coast just inside the border with Thailand. Langkawi’s tourism has been developed around its largely unspoilt natural beauty and the island has declared itself as a UNESCO Geopark, ensuring it’s development is guided by consideration for the environment and its unique geological features.

Within Langkawi, there are three major geopark areas and a number of smaller sites. One of the major parks is the Machinchang Cambrian Geoforest Park. The park protects a geologically significant area, with the sandstone rocks that form Gunung Machinchang and the adjacent peaks representing some of the earliest land to form in the region we now know as South East Asia. The sandstones date back to the Cambrian period some 500 million years ago and were originally part of the margins of the Gondwanaland super-continent.

Langkawi folklore however ascribes the presence of Gunung Machinchang to a fight between two giants. Mid-fight, both were struck by lightning and turned into stone. One of the giants became Gunung Machinchang and the other Gunung Raya, the other significant peak on the island. Gunung, by the way, means mountain in Malay.

Park visitors can access Gunung Machinchang’s peak via a cable car that rises from near sea level all the way up to Gunung Machinchang’s 708 metre (2323 feet) peak. Built around the cable car’s base station is a tourist village area called Oriental Village which incorporates a cluster of buildings incorporating Malaysian and Oriental architecture styles. I’ll save images of that for a later post. 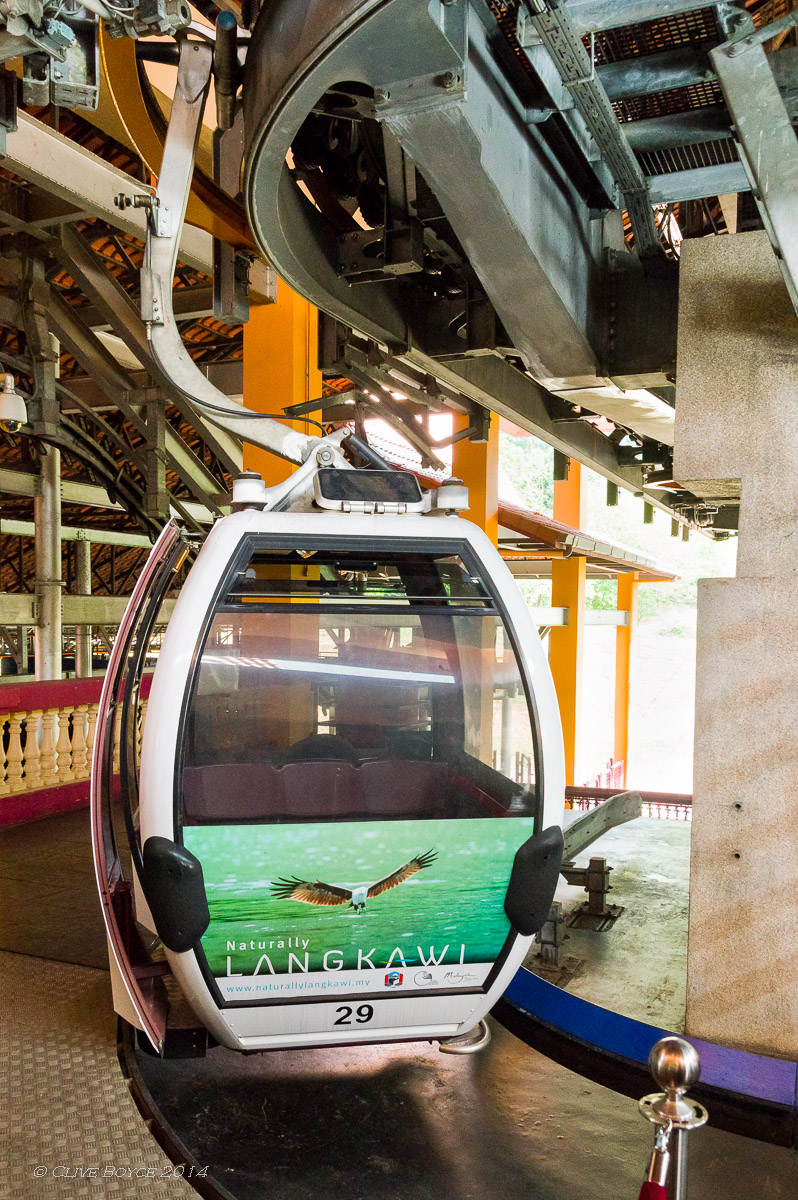 So, onto the cable car ride up to Gunung Machinchang.

For my first photo, I conveniently found a car coming around the base station’s turning wheel decorated with quite a pretty advertisement for Langkawi rather than one of the not so interesting ones for a local bank.

Readers of my previous post should recognise the bird featured on the front of the cable car. Quick memory test: what was it called again?

The cable cars look to be exactly the same models as used on Mt Titlus in Switzerland. I found this somewhat reassuring having previously undertaken a cable car ride up and down Mt Titlus!

If you happen to visit Langkawi and plan to use the cable car, please note that it is closed on certain days for scheduled maintenance. These days are advertised on the cable car’s website. END_OF_DOCUMENT_TOKEN_TO_BE_REPLACED