A few weeks back I granted myself an extra long weekend, taking a few days annual leave to fly to Queensland’s Gold Coast to visit a friend. On the Sunday morning, we walked down to the beach to catch the day’s sunrise (see Gold Coast Dawn).

The following day was a work day for my friend, and he kindly lent me his car so I could head up into the hills behind the Gold Coast and spend the day exploring beautiful Springbrook National Park. The park is in the Great Dividing Range that extends along the entire east coast of Australia from tropical Cape York down to the Victorian snow country, and is classified as part of the Gondwana Rainforests of Australia World Heritage Area.

Let’s start with something of a positioning shot atop the Springbrook plateau looking down the canyon. Broadwater and the Surfers Paradise highrises are visible in the distance. 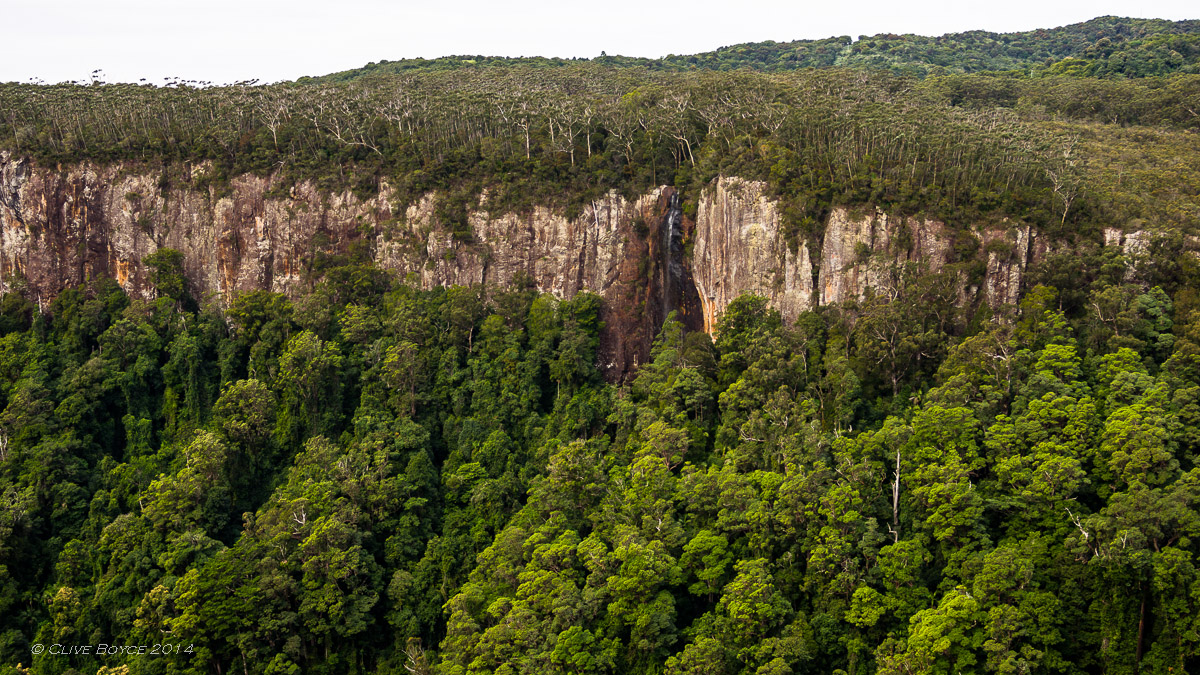 The range is some 850-1000 metres in elevation and capped by an ancient lava flow. Multiple creeks plunge off the plateau and into the canyon, eventually finding their way into the Nerang River.

Right at the very end of the Gold Coast-Springbrook Road is the Goomoolahra Falls picnic area. Here one of the many small streams that flow into the Little Nerang River cascades over rocky outcrops. Little do these water molecules realise they will soon be in for a bumpy ride… 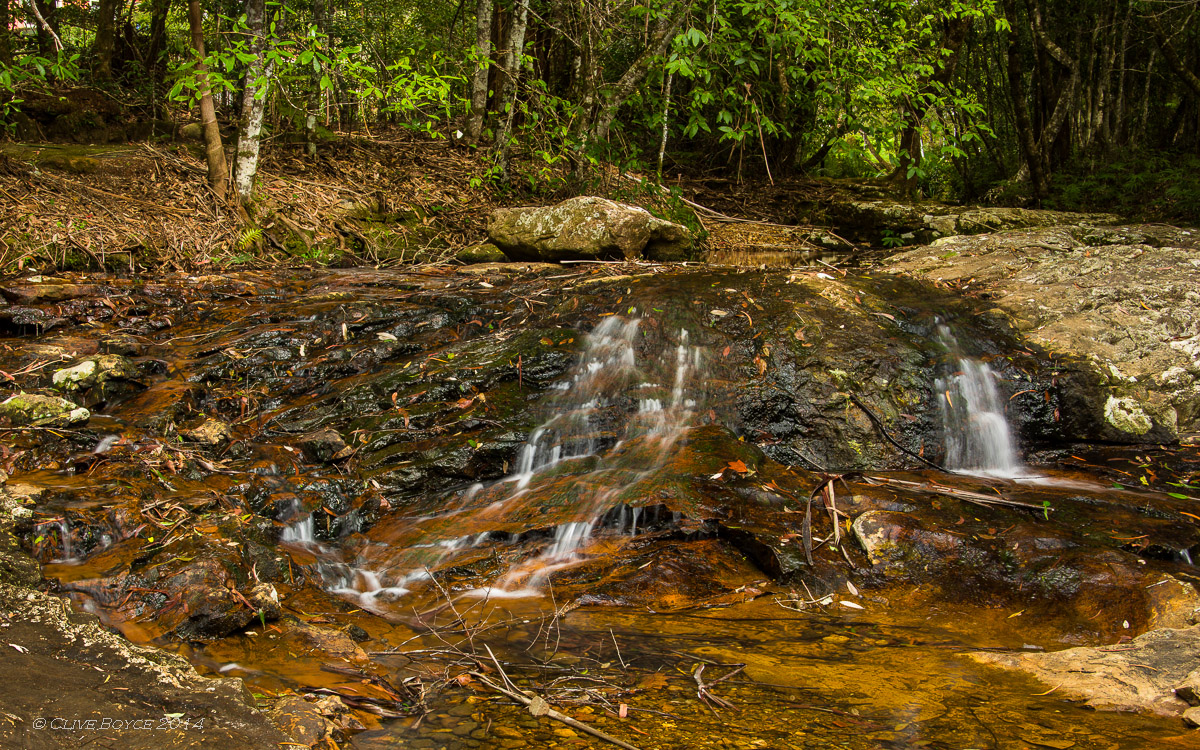 Goomoolahra Falls, a 60m drop to the bottom.

There are many bushwalking tracks within the park. Back down the road a little from Goomoolahra Falls is the Canyon lookout which can be used as an access point for the Twin Falls bush walk. The Twin Falls track is a 4km circuit, half of which is along the top edge of the plateau and the other half though the sub-tropical rainforest found along the base of the cliffs. It’s around a 2 hour walk, but if you are a keen photographer, plan on adding on another one to two hours, as there is lots to stop for. The next sequence of photos come from my wander along the Twin Falls track. 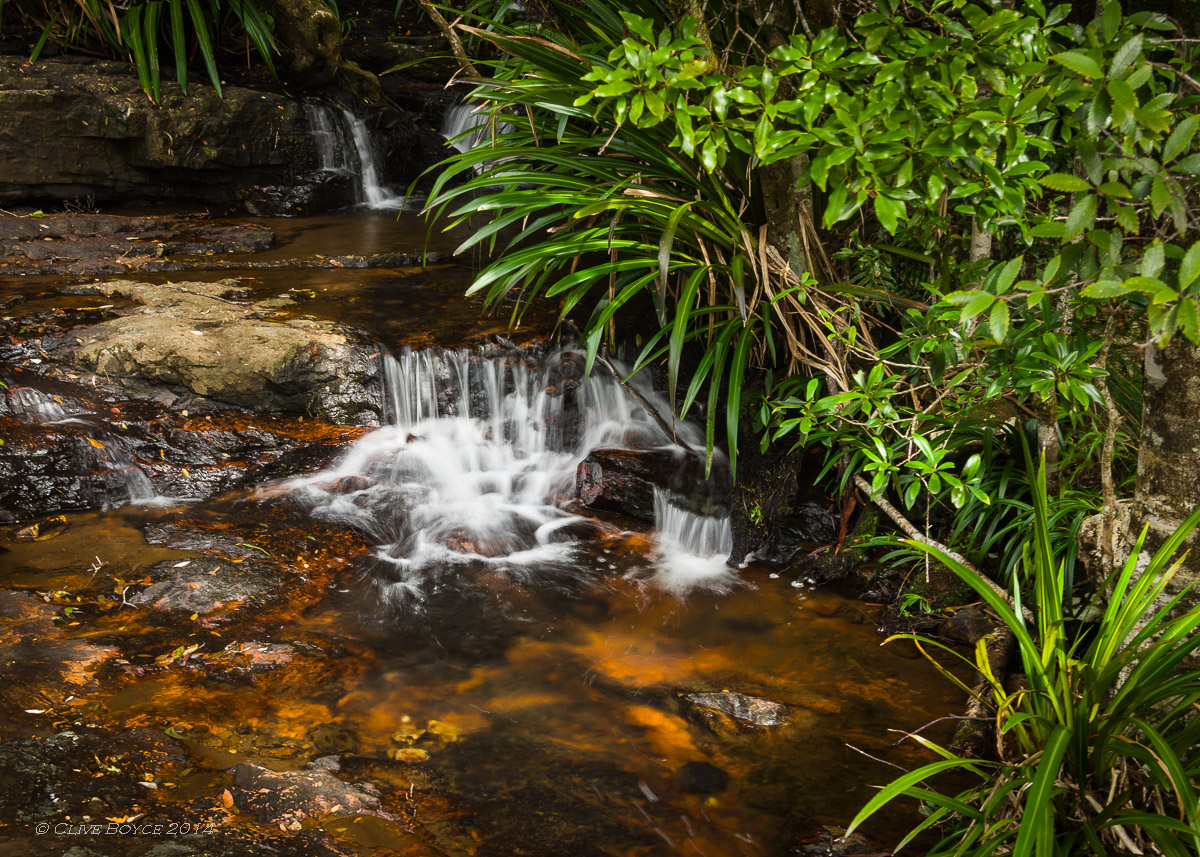 Another small creek soon to plunge over the plateau cliffs.

On the descent off the plateau, the track passes through several crevices formed by enormous boulders that long ago broke off the cliffs. 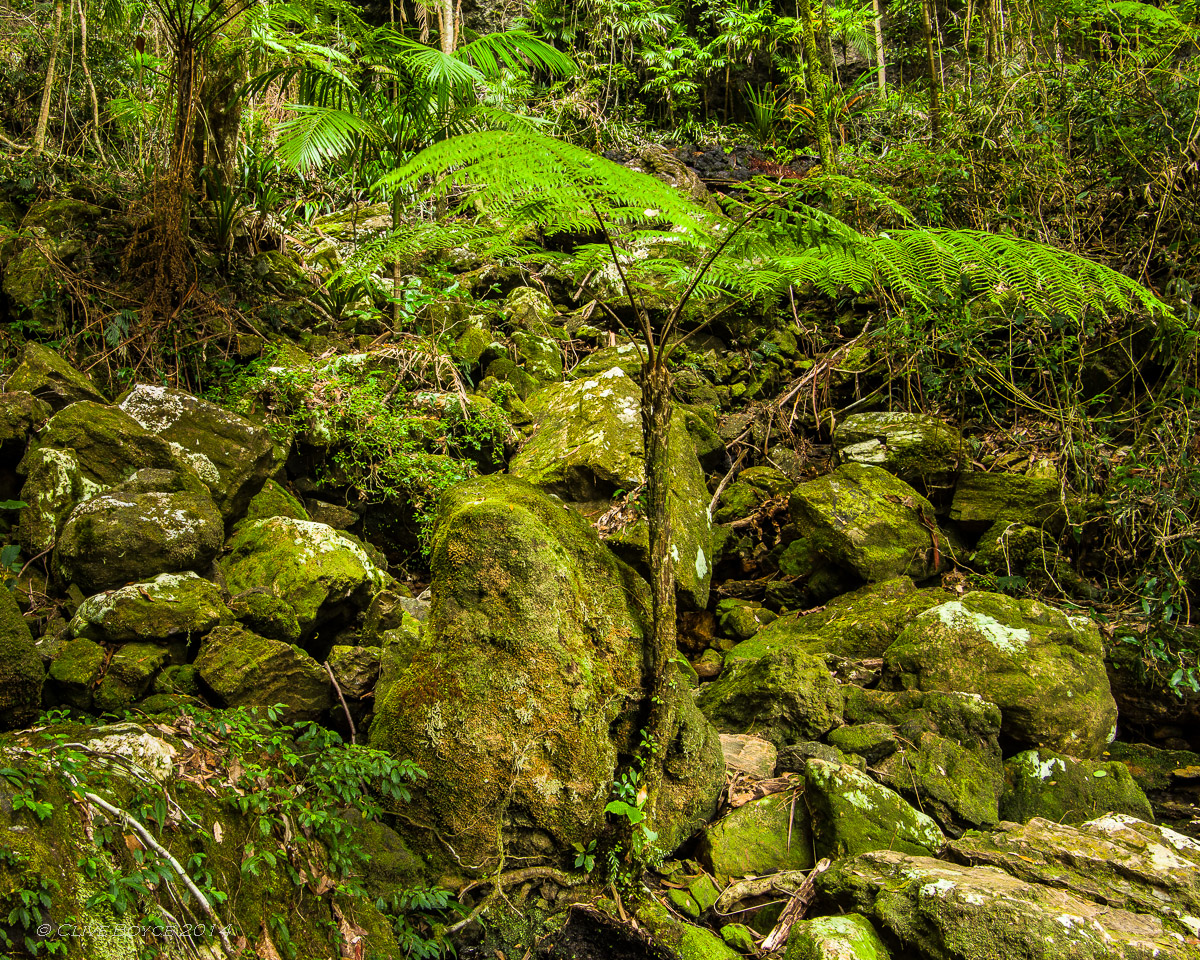 It’s a lush moist environment with palms and tree ferns among the trees.

Once on the lower section, the track passes behind Twin Falls, the first of two waterfalls found along the track. Wetted, the dark volcanic nature of the rock is very apparent. 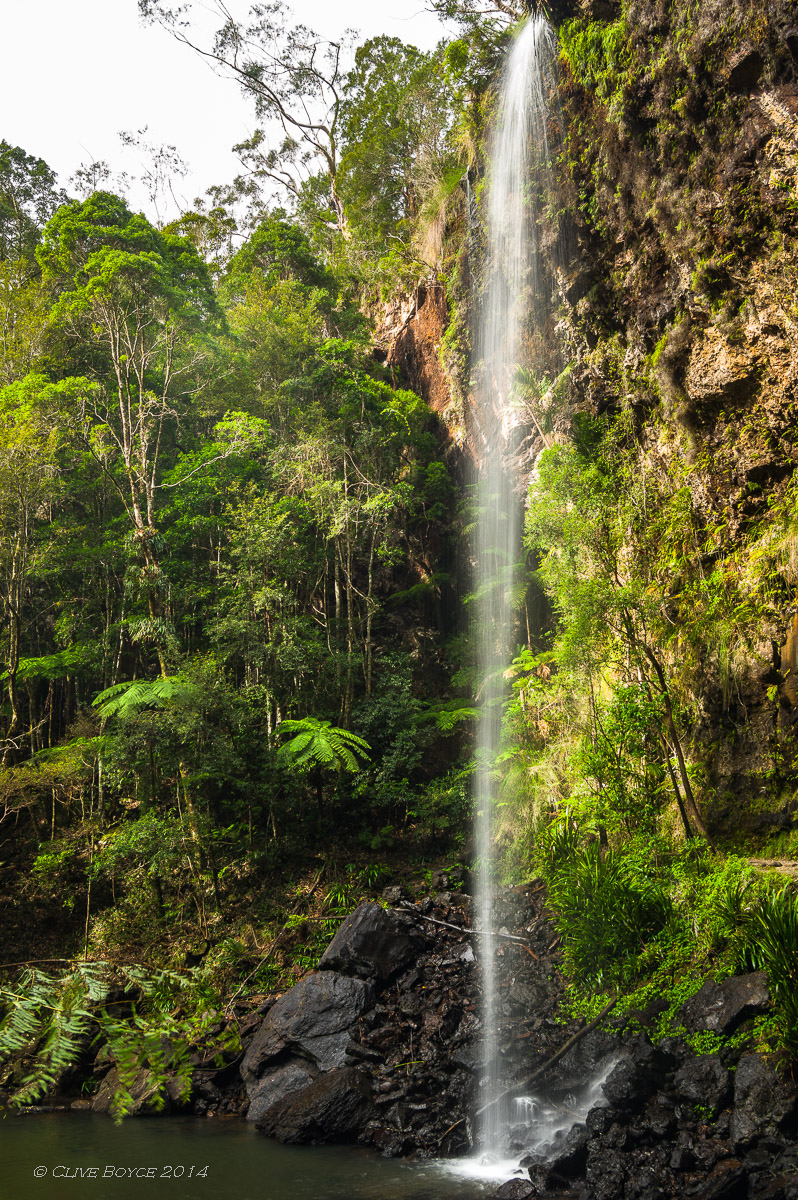 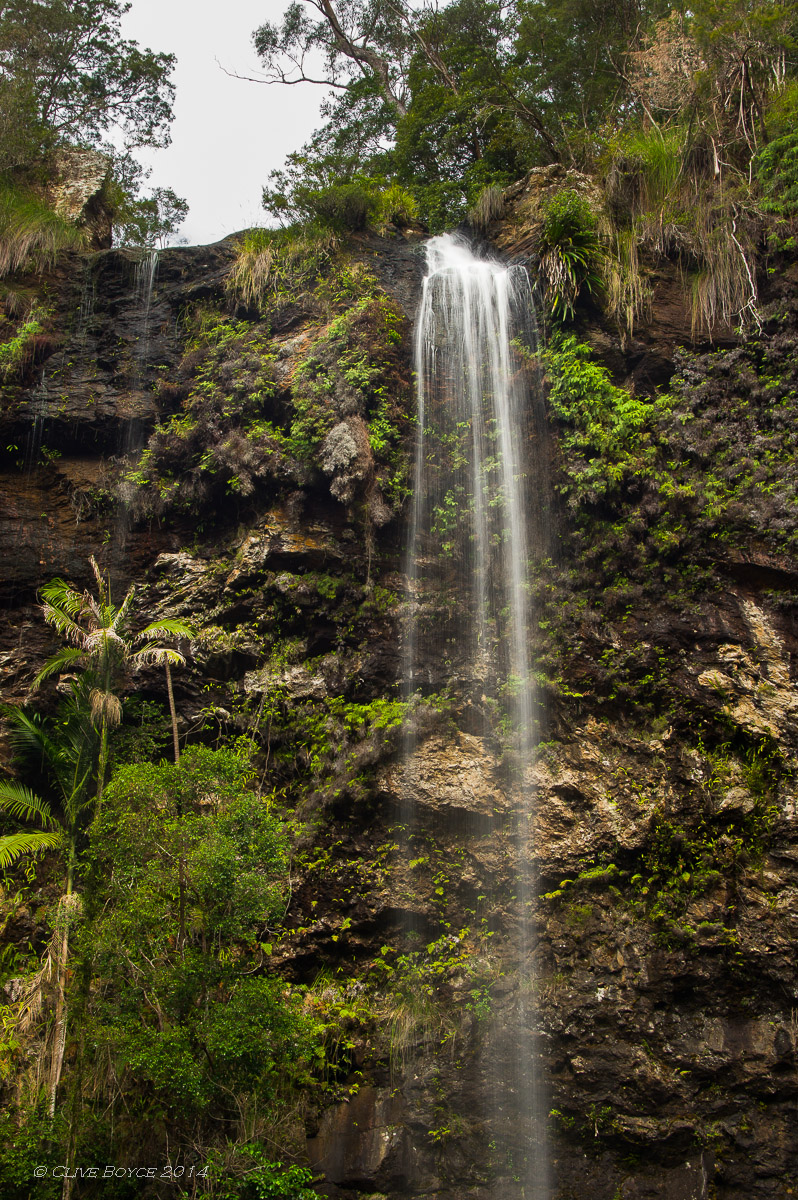 Bottom of the falls. This image reminds me of the introductions to the Mr Bean tv series, where Mr Bean drops to the street in a shaft of light. He was absent on this occasion.

The walking path skirts around the edge of the waterhole. Looks to be a lovely spot for a dip on a hot and humid summers day.