Yorke Peninsula lies across the Gulf St Vincent from Adelaide and in a similar way to Italy is shaped much like a leg and foot, but much smaller at around 200 km in length.  My prior post took a look at the setting sun at Moonta Bay which lies at the very top of the peninsula, at the ‘hip’ as it were.

Travelling down the peninsula by road you eventually arrive right down the far ‘toe’ end. From Moonta Bay, it’s a 2½ hour drive, and 4 hours or so if travelling directly from Adelaide. Rugged Cape Spencer and West Cape define the toe and for this post I’m featuring sunsets again, this time at West Cape.

The two capes are within the Innes National Park and around 20 minutes drive from the last township on the peninsula, Marion Bay (which has previously featured on Photo Morsels in A wet and rainy day in Marion Bay).

The images in this post were taken in July last year (2014) which is mid winter down here in Australia. Despite that, the weather while I was there was fine and mild.

In sailing ship days, ships approaching from England and Europe would make landfall in the general vicinity of the capes and enter Investigator Strait in order to proceed to Adelaide. This would have been the first land those ships had seen since rounding the Cape of Good Hope at the base of Africa. Combine the navigational challenges associated with a journey of some 10,000 kilometers without any land observations, the presence of islands and reefs, strong tides and notoriously rough and windy weather on the wrong day, and the area soon became a shipwreck coast. To improve maritime safety, lighthouses were established as early as 1879. 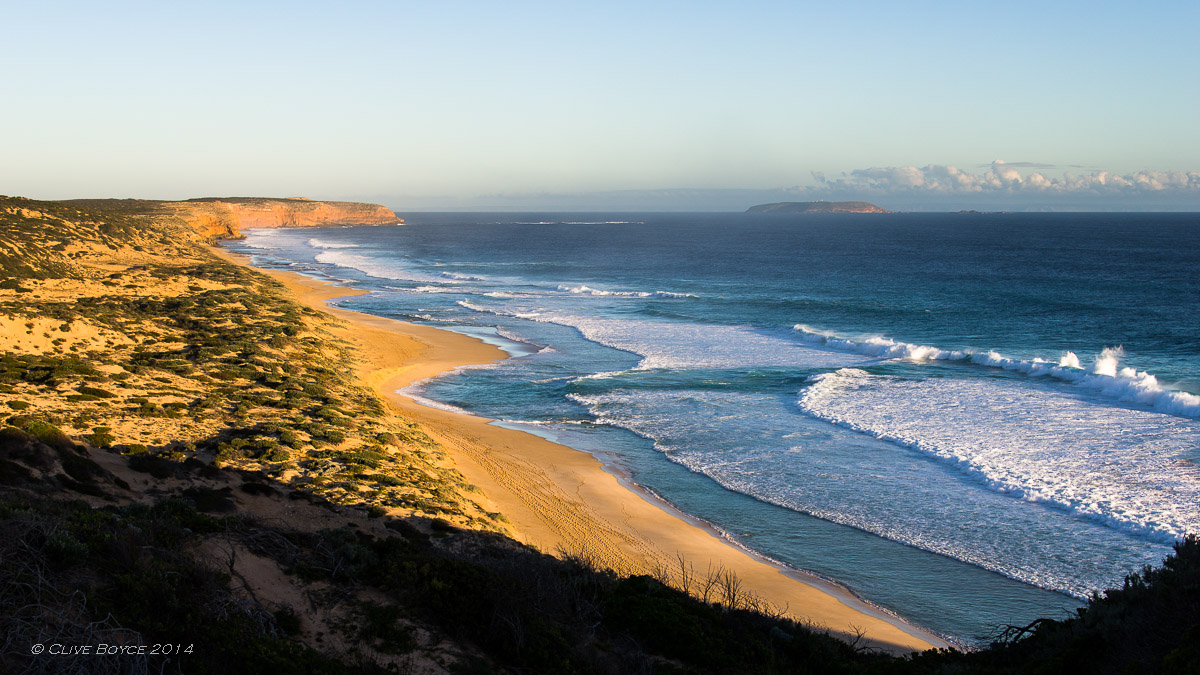 West Cape beach in the late afternoon, with shadow formed by the West Cape headland extending into the dunes. The patch of clear water perpendicular to the beach is a powerful rip carrying water deposited on the beach by the swell back into deeper water. Definitely not a swimming beach, and only experienced surfers look to surf here.

One other car load of visitors arrived soon after I did, but they soon scarpered as a cool winter breeze coming off the water wasn’t all that enticing. This left me to enjoy the wilderness in complete solitude. In the distance are the Althorpe Islands sitting at the western entrance to Investigator Strait. 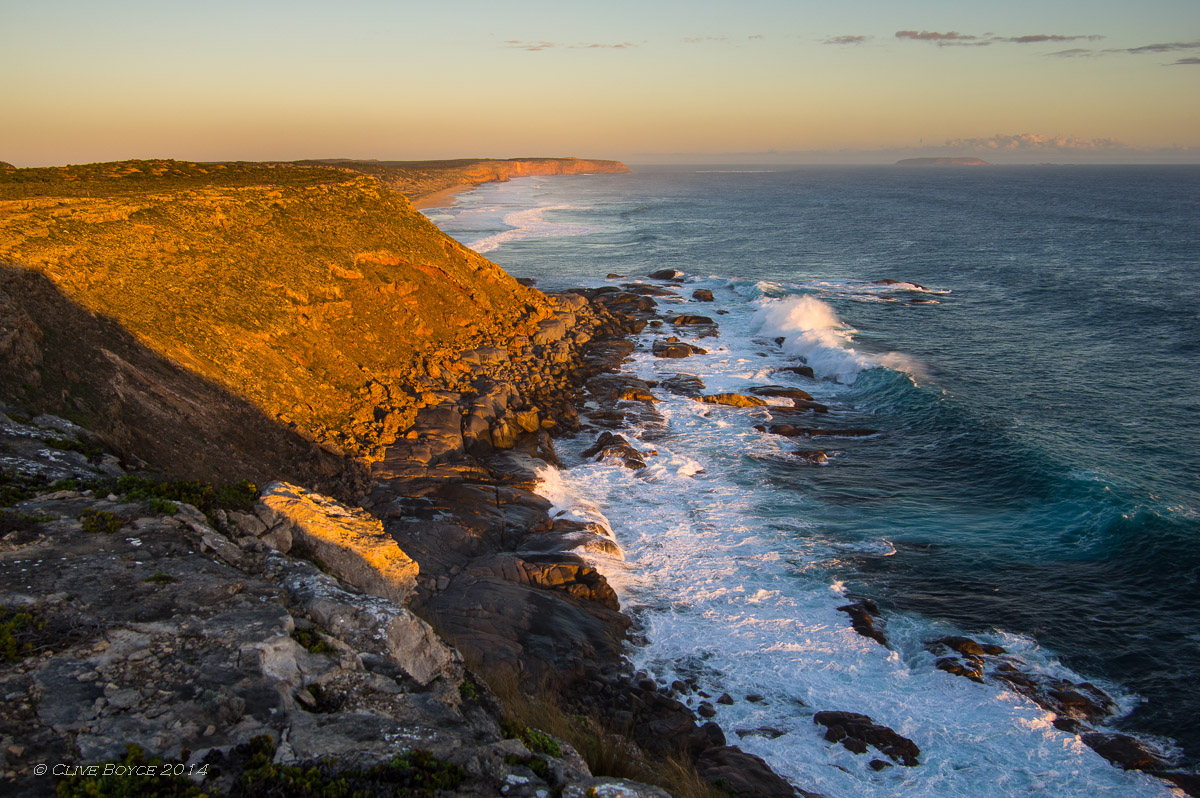 West Cape directly faces the Southern Ocean swells. The weather down at the bottom of Yorke’s was very mild with little wind, but still the rollers from the ocean pound the shoreline. 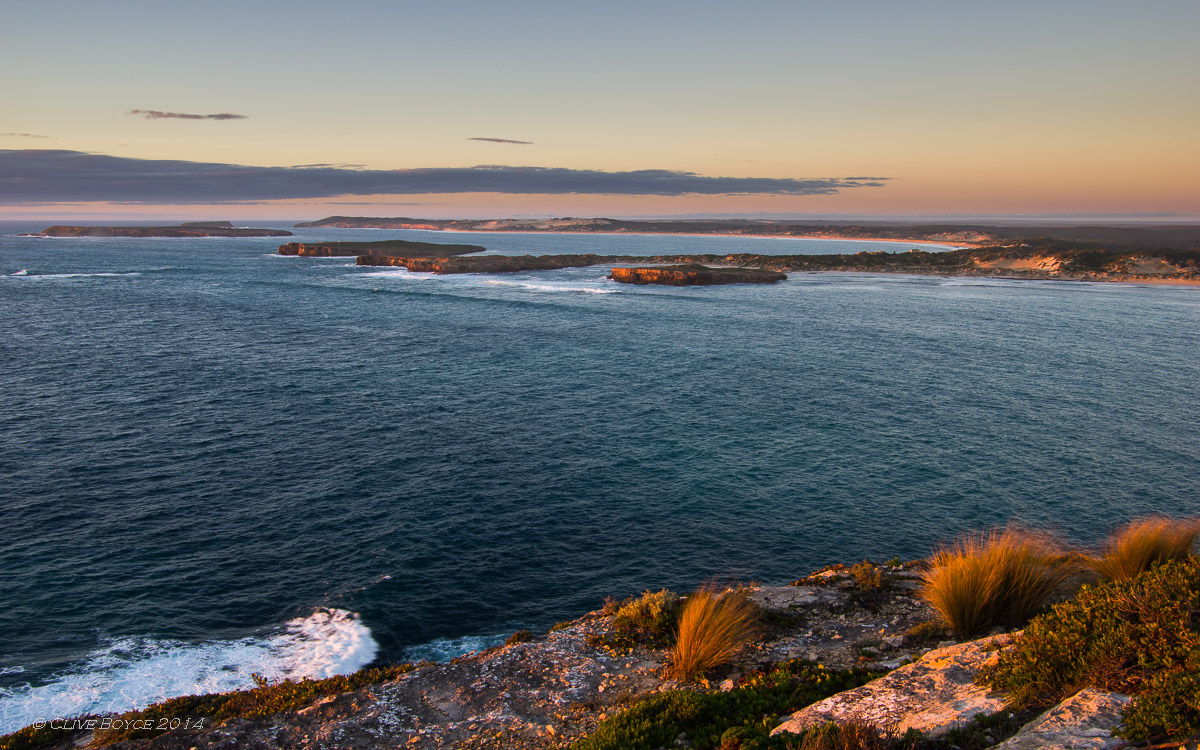 On the northern side of West Cape is Pondalowie Bay, a popular surfing spot. Pretty much a right of passage for any young South Australian surfer is a long weekend spent bush camping at ‘Pondie’.

Last rays of the evening’s direct light. Wedge Island to the left, some 20 miles (30 kilometers) offshore. A little over the horizon to the right roughly where the cloud in this photo lies is Dangerous Reef, a renowned location for great white sharks. If you’ve ever seen documentary footage of divers in shark cages up close and personal with a great white, changes are that it was filmed at Dangerous Reef. It would be a good working assumption that the waters surrounding West Cape are patrolled by great whites.

The lighthouse at West Cape was a late addition to the navigation aids in the area, built in 1980 from stainless steel.

Pick of the evening’s photos I think.

Last remnants of the golden light, still colouring the west facing cliffs even though the sun was now well below the horizon.

The high point on West Cape provides 360 degree views encompassing up and down the coast and the low mallee forest inland. 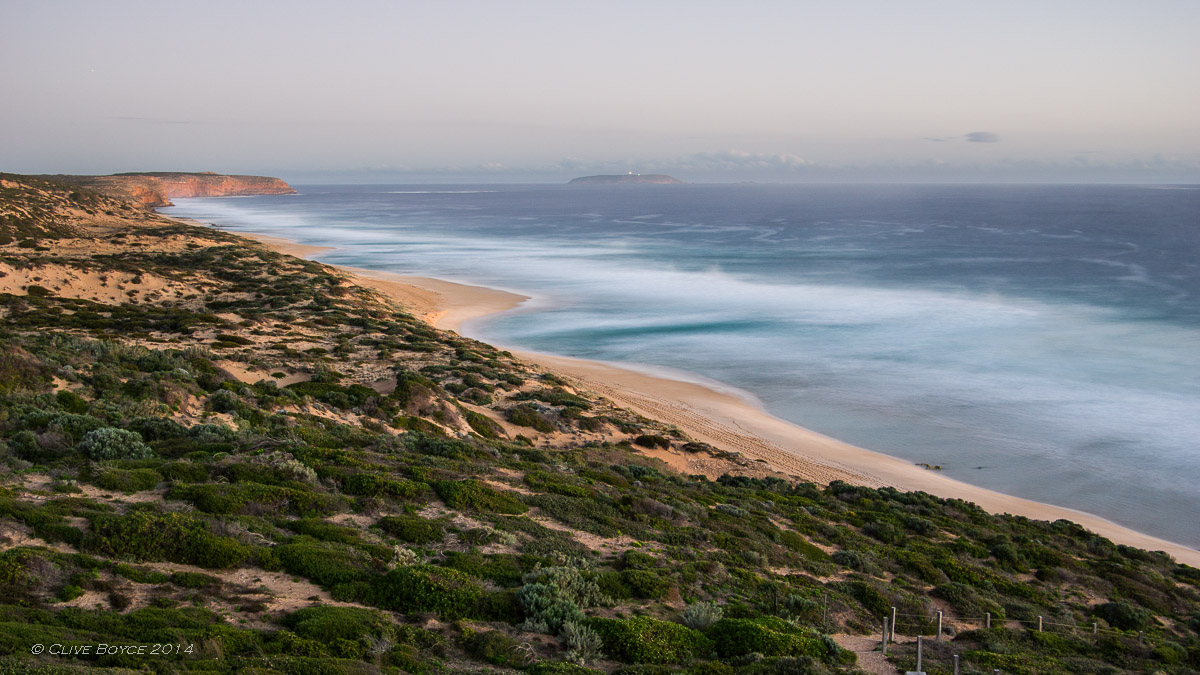 It never ceases to impress me what detail a good digital camera can extract even after human vision has well and truly hit its limits. I was stumbling around in near darkness at this stage, but a 25 second exposure at ISO 200 reveals the colours that persist in the landscape even as human eyes are reduced to registering outlines in blacks and greys.

Back to the car after that last shot for the drive back to Marion Bay and dinner. Kangaroos, of which there are many within Innes National Park, emerge at dusk to feed so it was a slow and cautious drive to ensure none became bonnet emblems.

Pentax K-3 and my Pentax FA 20-35 zoom. Took my newer and heavier tripod (Vanguard ABEO Pro 283AT Tripod) along for the evening. The extra weight of the Vanguard came in handy as there  was just enough breeze coming off the sea to potentially shake my usual lightly built travel tripod.

End of the day at Moonta Bay

A wet and rainy day at Marion Bay

Also down that way is Point Turton: