I’m sitting at home tonight with the first fire of the 2015 winter imparting the pleasant and satisfying warmth that only a wood fire can generate.

It only seemed like a few weeks ago South Australia was enjoying the transition from summer to autumn which weather-wise is undoubtedly the most pleasant time of the year along the southern side of Australia. For this post I’m revisiting one of those balmy late summer evenings.

Just before Easter I traveled up to Moonta Bay, a popular holiday location on the upper Yorke Peninsula some 160 kilometers (100 miles) from Adelaide for an overnight stay. During the day, cloud cover made the light quite unattractive for photography, but as the sun dropped low into the sky, things got a bit more interesting.

This image also looked to be a good candidate for a black and white conversion. With a bit of further tweaking beyond what I did for the colour version, this is what I ended up with. I quite like both versions.

On the other side of the jetty, some fishermen were cleaning their catch while others were packing up and heading home for dinner.

I was staying at a small motel/restaurant right by the base of the jetty. The preceding images were taken before I went down to the restaurant for dinner but I could see the potential for an interesting sunset so I took my camera and tripod down with me to dinner. The restaurant had big picture windows looking out over the sea and when the colours started to become interesting, I snuck out for a few minutes between the starter and mains to capture the sunset. 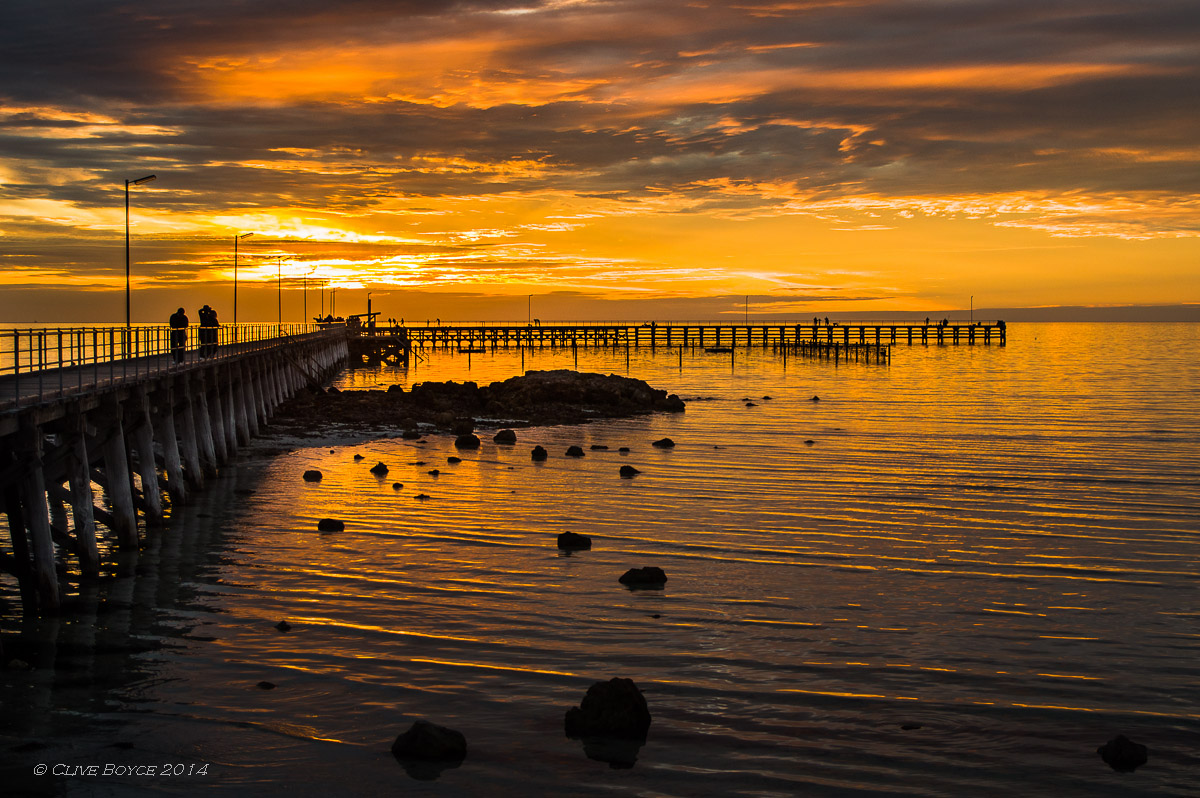 Quite a contrast to the earlier blue/gray tones!

Just before the trip to Moonta Bay, I’d acquired a secondhand Pentax FA 24-90 zoom lens and used it for the first time to take this post’s photos. Camera was my Pentax K-3.

As you can see, it can produce some nice colours, but it’s not really in the same league as my FA 20-35 for sharpness and contrast. The FA 24-90 is ok but needs a fair bit of post processing to tease out what images have to offer. The FA 20-35 does admittedly set a very high standard. Certainly my favourite zoom at the moment. Pity, as I was hoping the FA 20-35 and the FA 24-90 would make a nice pairing. Back to the drawing board on that one.

Moonta Bay is in the centre of the Copper Coast, so called for the copper mining that boomed in the area during the late 19th Century. It’s a popular holiday location with gently sloping beaches ideally suited for young children to puddle about.

Jetties seem to be a popular subject for my photography, as I’ve spied several earlier Photo Morsels posts combining jetties and dawns/sunsets.

Down at the southern end of Yorke Peninsula, I’ve previously posted some images taken at Marion Bay:

A wet and rainy day at Marion Bay

Also down that way is Point Turton:

And back in Adelaide:

3 thoughts on “End of the day at Moonta Bay”