Running the carriages back along the platform.

At the rear of the original Ghan’s passenger cars is Commonwealth Railways Special Car No. 3 with its round-ended observation lounge. The car was used for ‘distinguished visitors’ and for hire to the public. Note the wooden sun shades installed along each of the carriages. The original Ghan operated in pre-air conditioner days through remote desert country where summer temperatures regularly exceed 45ºC (113ºF) and can peak at 48-49ºC (120ºF). Spare a thought for the passengers on their multi-day journey rattling along the track to Alice Springs. The summertime conditions for the engine driver and the fireman must have been appalling. 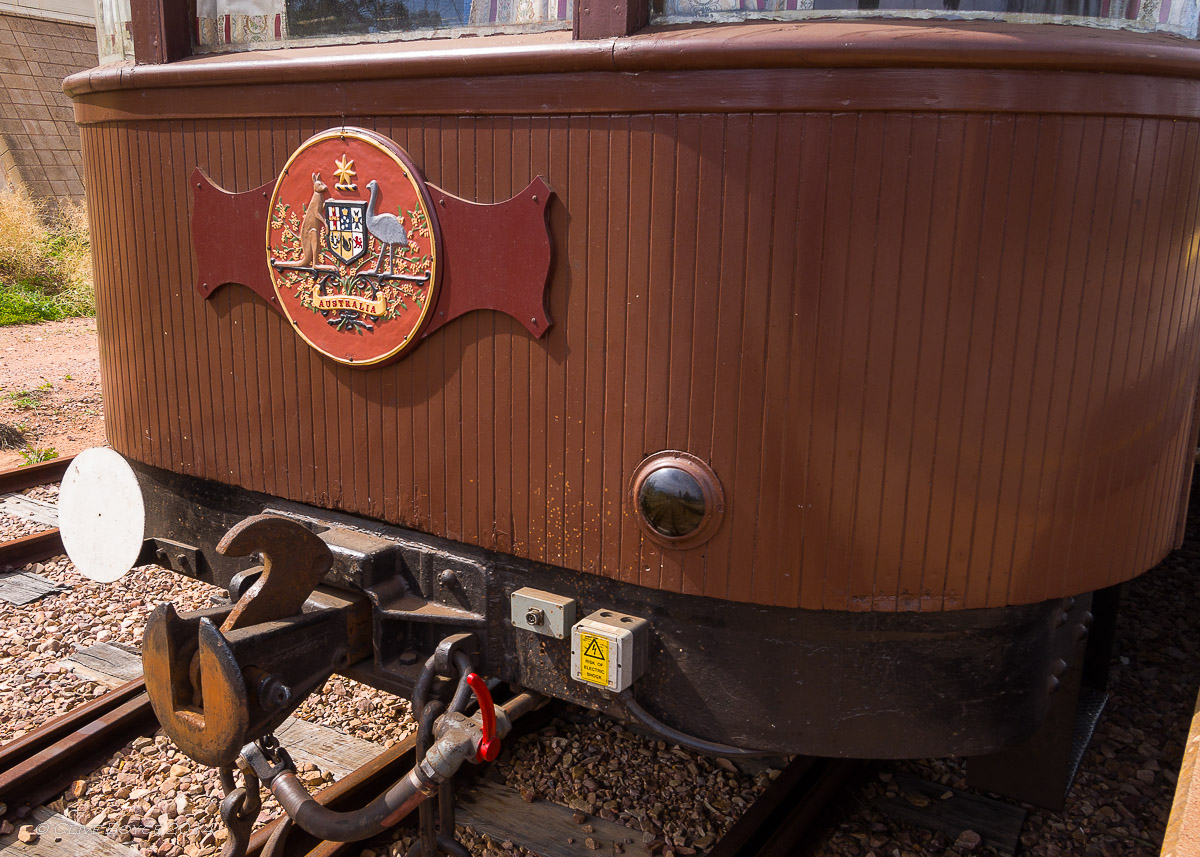 A closer look at the rear of Special Car No. 3. Much lighter and simpler coupling systems than those found on modern trains, and being a Commonwealth Railways carriage, decorated with the Australian coat of arms. 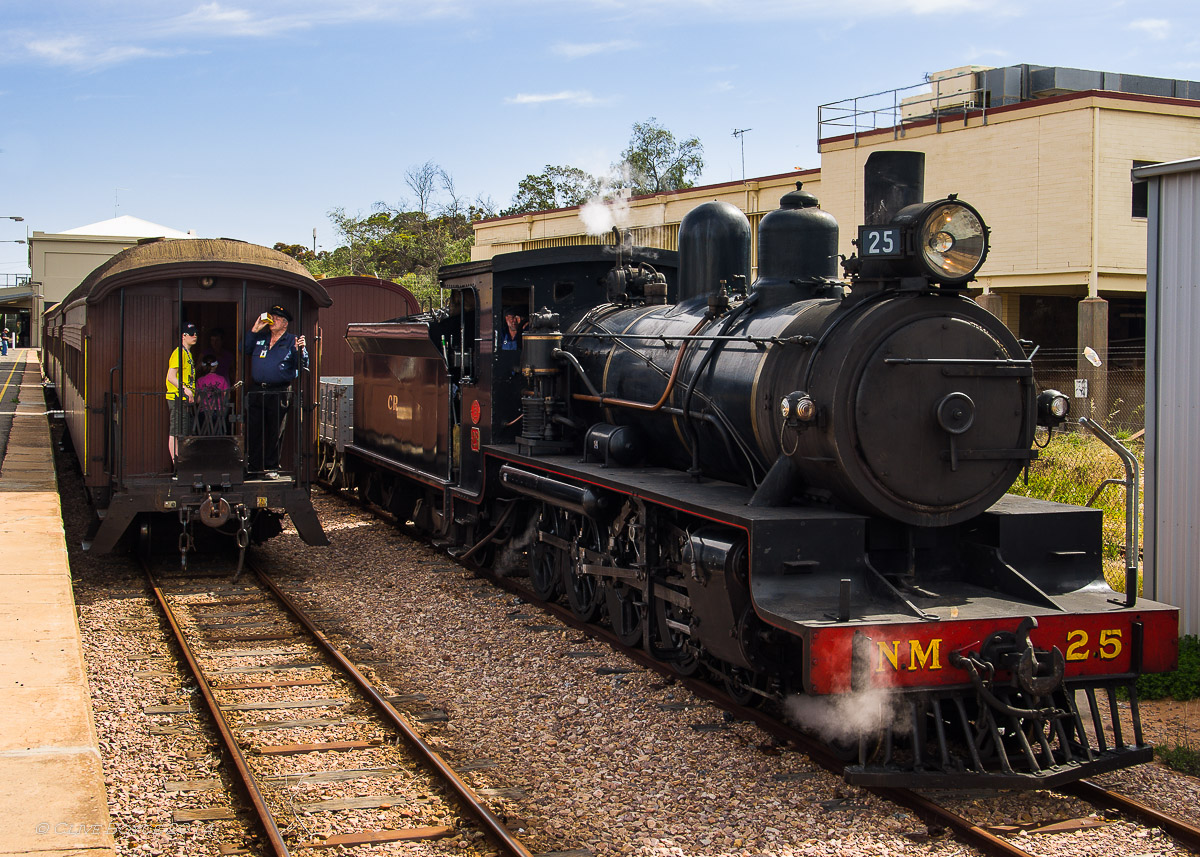 Having dropped the passenger cars at the platform, NM25 reverses down an adjacent track to load up its goods carriage assignment.

The Port Augusta to Alice Springs railway was an important supply line to the top of Australia during the Second World War. From Alice Springs, war supplies would have been trucked through to Darwin. Although talked about for nearly one hundred years, a railway line from Alice Springs to Darwin wasn’t built until the early 21st century. This particular edition of the Afghan Express pays tribute to the railway’s war contribution by carrying a load of World War II era military vehicles. 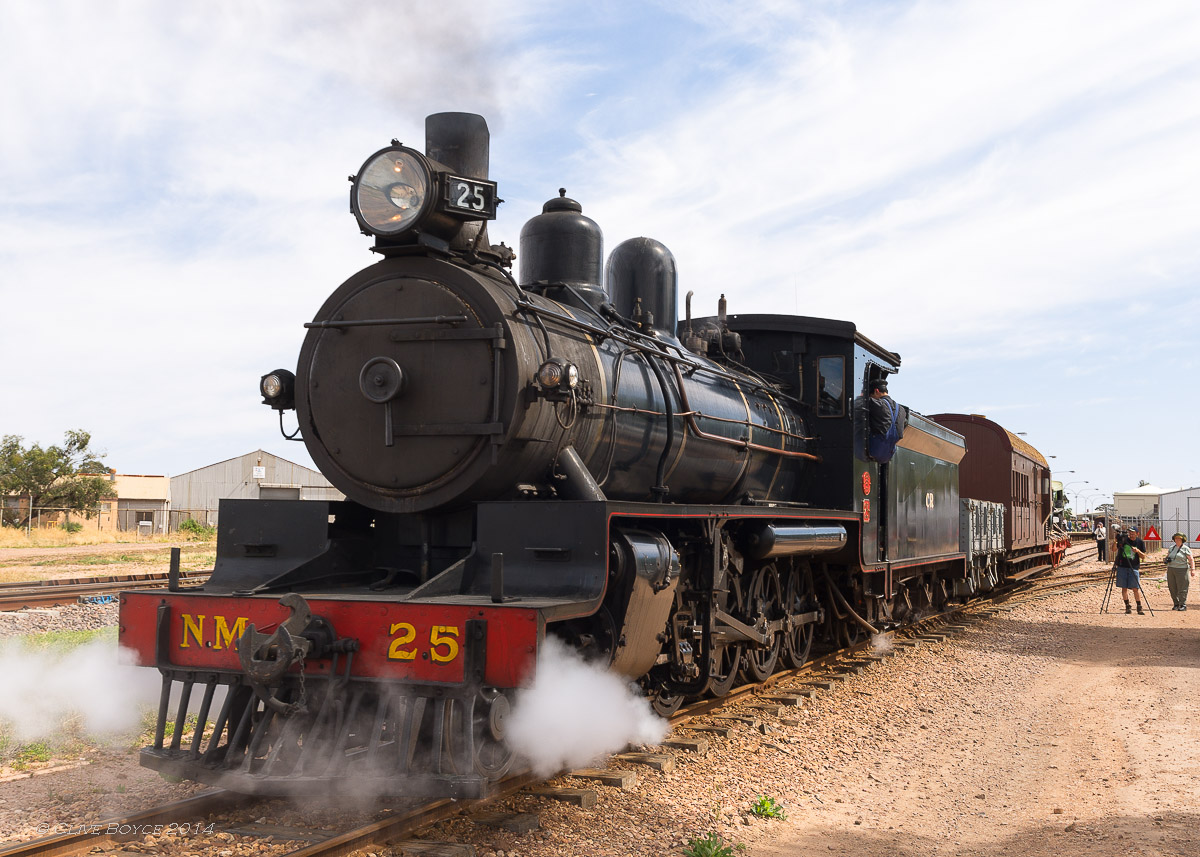 Shunting the goods carriages to form up the train.

On the next Photo Morsels post, we’ll do a little train chasing.

Being 2013 images, the camera in use was a Pentax K-x rather than the Pentax K-3 I’m now using. The first few shots used a then just acquired and ‘new to me’ Pentax FA20-35/4. As I hadn’t any real experience with this lens, I then swapped back to my known walkabout lens, the Tamron 17-50mm F2.8, just in case the FA20-35 had a fault that I hadn’t yet picked up. The FA20-35 proved itself to be A-OK but I didn’t want to later find I had gone several hundred miles out of my way just to end up with unusable photos.

The Pichi Richi Railway website is here. Lots of details on their rolling stock and service schedules are also there. In 2015 the double headed trains are listed for 6th June and 3rd October. I also see their quaint little ‘Coffee Pot’ loco is promised to return to service some time in 2015 after several years off-line awaiting significant repairs.

Port Augusta is around 3½ hours drive from Adelaide while Port Augusta to Quorn is about 30 minutes by car provided you don’t stop for train photos :-).

Port Augusta/Quorn is the southern gateway to the Flinders Ranges proper. The Flinders give a real taste of the outback while still being accessible by two wheel drive vehicles as far as Blinman. It starts to get a bit on the rough side after that. Tacking a Pichi Richi train experience onto a Flinders Ranges holiday would be a good combination. I don’t recommend a Flinders Ranges holiday in summer – some days might be fine but you could also get stuck with a full-on heat wave. Late March to October are the best travel times and that also broadly coincides with when the Pichi Richi Railway runs steam services. During the fire ban season, they will run heritage diesels rather than steam because of the fire risk associated with embers and ash emitted from steam locomotives.

From what I have seen from several visits up there, the Pichi Richi heritage train services have their minor hiccups along the way and can run moderately behind schedule.  It you choose to ride one of the Pichi Richi trains, build some slack into your day’s scheduling and just go with the flow enjoying an authentic experience. The original Ghan rarely kept to a schedule either.

Too many other train posts to list easily so here’s the link to the Trains category where you can explore other posts at your leisure.