One more post with the Pentax DA 10-17 fisheye zoom before I migrate back to some of my other lenses. And for this post, rather than looking to use the ultra-wide angle field of view solely for creative purposes, the 10-17 zoom became the go to lens simply on the basis that I needed it to fit the subject into the frame.

Adelaide is currently in the middle of ‘Mad March’, the early autumn period where we squeeze almost every cultural event imaginable into the gap between our summer heat and the onset of autumn rains.

One of the less known events is the Adelaide Biennial of Australian Art which I must say would have passed right by me (and so revealing myself as a cultural pygmy) except for one hard to ignore exhibit.

For one Saturday morning only, the Biennial brought Skywhale to the Adelaide Botanic Gardens. Skywhale is a hot air balloon commissioned for the Centenary of Canberra events held in 2013. Conceived and designed by Australian sculpture and contemporary artist Patricia Piccinini, Skywhale is intended by Patricia to be an exploration of the wonder of nature and its extraordinary capacity to find ways to adapt to any environment.

Skywhale is a little hard to describe, being something resembling an unlikely mating of a whale, a dairy cow and a chook.  I’m sure it sparked many a conversation when it first took to the skies in Canberra (which, for non-Australian readers, I will point out is the capital city of Australia and located approximately half way between Sydney and Melbourne).

So maybe, I’ll just move onto the pictures…

On approach to the exhibition area, what do we have we here? Observation number one: it’s big! And reminiscent of the back end of a chook. 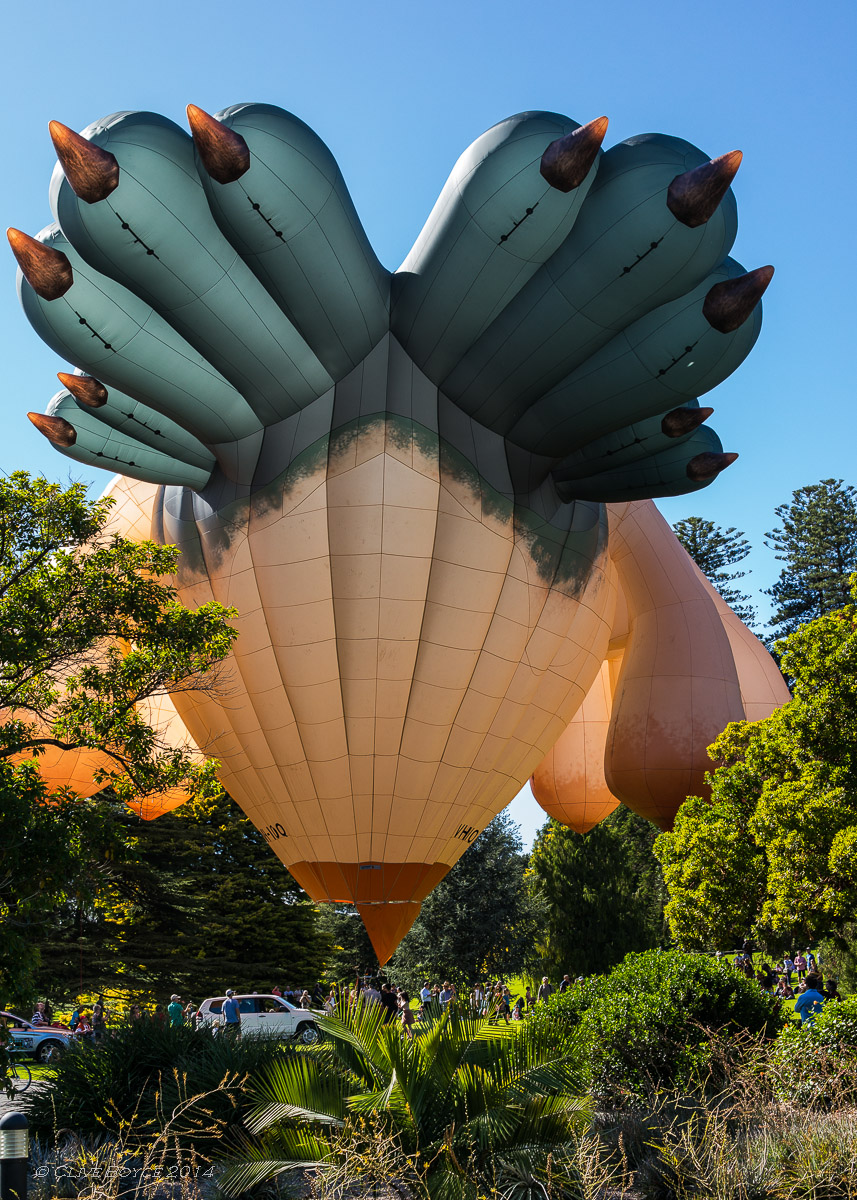 Somewhat closer and no less “interesting”.

And then the whole of the beast is revealed in all its glory:

And being an arts event, sketch artists were out in force.

Right down at the 10mm end of the DA10-17 zoom and using the trees around me for framing.

As mentioned in earlier post, the creative opportunities provided by the fisheye zoom are quite impressive. To obtain an image different to the prior one, I’ve simply moved a few metres forward and right of where I took the prior image (you can use the blonde girl wearing a white t-shirt who appears in both images as a reference point) and zoomed to 14mm to loose some of the fishy-ness. Somewhere about here, thoughts of the 1970’s Woody Allen movie “Everything You Always Wanted to Know About Sex (But Were Afraid to Ask)” sprung into my head. If you’ve seen the film, you should know why.  The other memory Skywhale dredged from the dark recesses of my mind was the Roger Dean fantasy artwork featured on the album covers of 70’s prog-rock band Yes.

And looking into the belly of the beast:

The look of wonderment!

I wasn’t the only photographer. A couple of loose Canons in my way!

And a final shot, backlit by the morning sun for artistic effect. 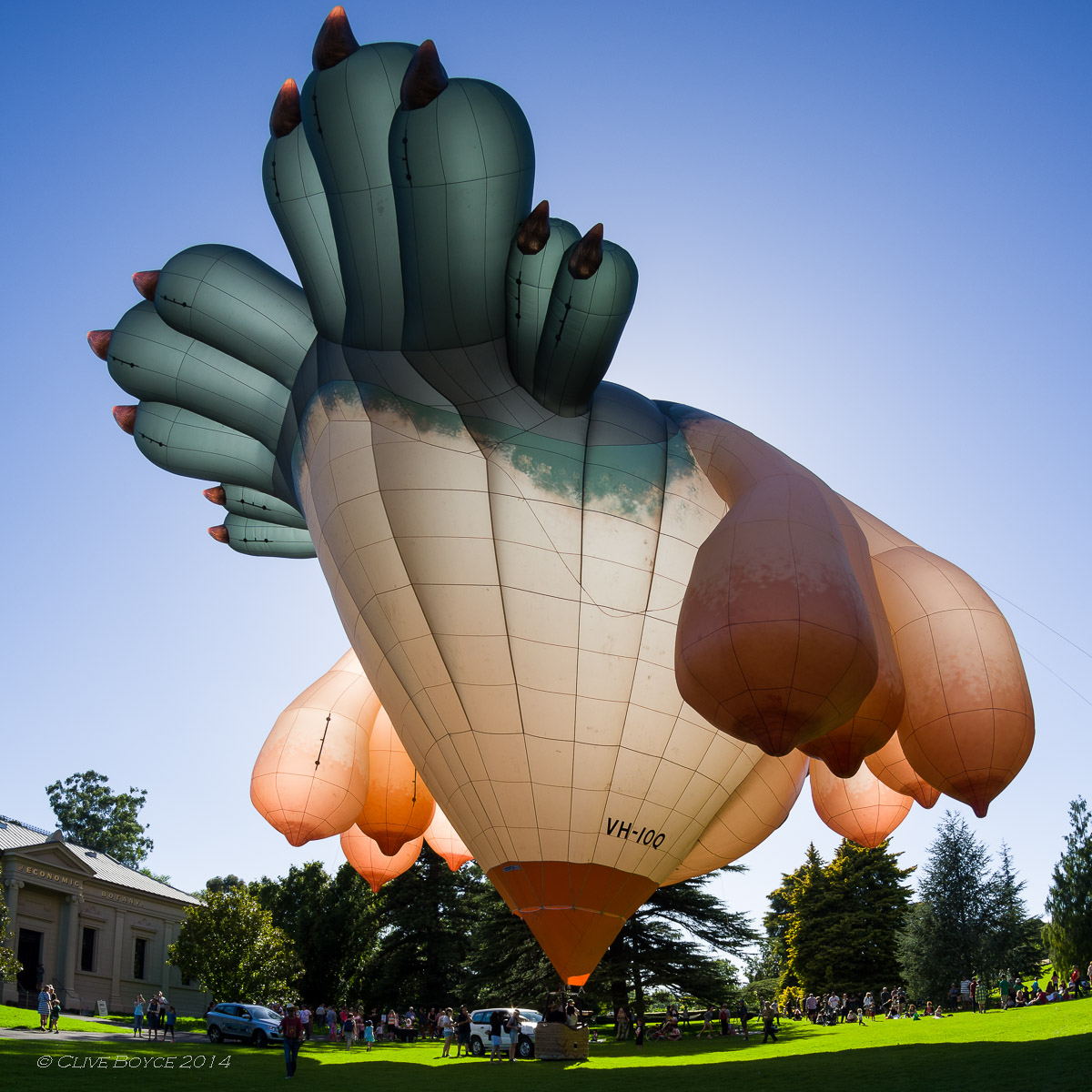 I wasn’t sure what to expect so I came loaded with something of a photo gear arsenal. In the end, I mostly used my Pentax K-3 with the Pentax DA10-17mm fisheye zoom although some of the close-ups were taken with the Tamron 17-50 F2.8 zoom before I swapped to the DA10-17 for its wider field of view.

The more distant shots were taken with my Samsung NX1000 mirror-less camera and a Samsung 30mm F2 pancake lens.

If you were wondering, the Skywhale wasn’t set free to float away. Proximity to the aircraft approaches for Adelaide Airport and the lack of open land for a landing meant the Skywhale remained a static display.

And yes, the grass was truly a lush green and not a function of excessive zealousness with the saturation controls. After a month of record breaking heat, Adelaide had recently received four inches of rain in a day. Warm soil + plentiful moisture, and the kikuyu grass was off and racing.

Fun with a fisheye