Following on from the most recent post that featured a day’s shooting with a new to me fisheye zoom lens (see Fun with a fisheye),  this next post will share a few images I’ve subsequently taken with this lens back in my home town of Adelaide.

Firstly, a quick recap for those who have not read the Fun with a fisheye post: I recently acquired a secondhand Pentax DA10-17mm fisheye zoom and set out to discover what sort of images I could make with the ultra-wide angle views this lens can deliver. The Fun with a fisheye post shared images of my first day with the DA 10-17, a day which happened to find me over in Sydney.

Back in Adelaide, I have since made a couple of trips down to the beachside suburb of Glenelg, a location I often head to when trying out new photo equipment. So, without further ado, over to some evening images of Glenelg. 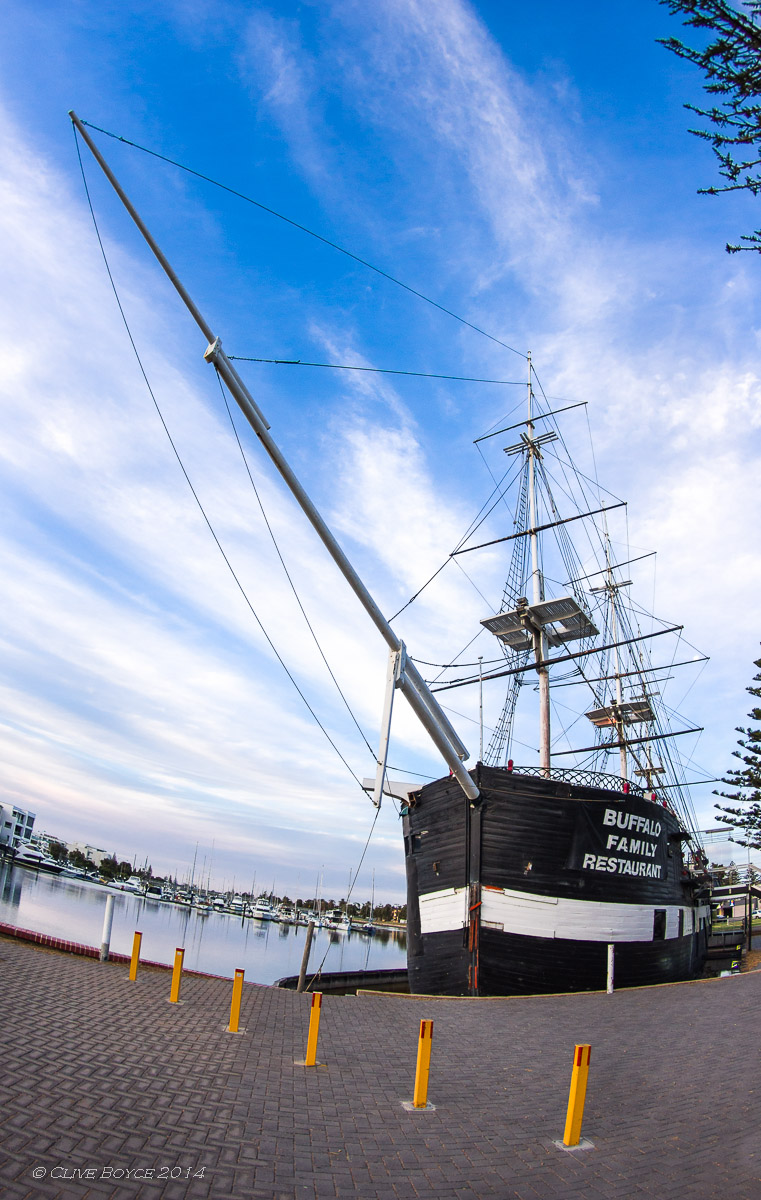 A replica of HMS Buffalo – the original was wrecked off the North Island of New Zealand. The Buffalo brought the first settlers of the colony of South Australia in 1836, unloading its passengers at what became known as Glenelg. Photo-wise, a near 180º view towards the wide end of the lens can take a little getting used to. The tip of the bowsprit was over the top of my head and marginally behind me. Weird! Lots of green chromatic aberration in the upper right corner around the tree branches. This seems to be a bit of an issue down at the zoom’s wider focal lengths (this was taken at 11mm) with high contrast detail in the corners. If I had lots of time, the best thing for this particular image would be to clone out the tree branches altogether in Photoshop or similar software. I really didn’t want them in the image and were a by-product of wanting a field of view wide enough to take in the bowsprit. It was also one of those really flat and contrast-less evenings that was hard work to get much out of. I’ll have another go at this scene one day when there is better light. 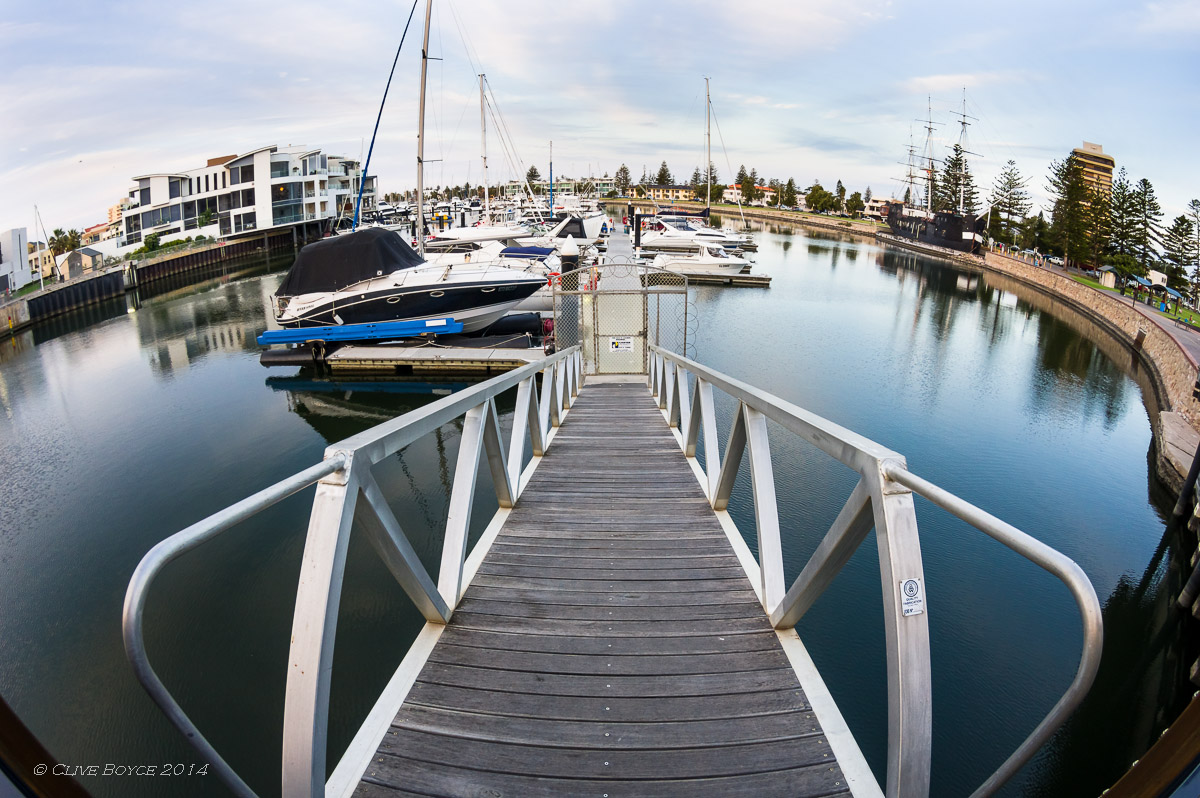 A somewhat amusing transformation of the Patawalonga River estuary into what rather looks like an oversized duckpond complete with (big boys’) toy boats. 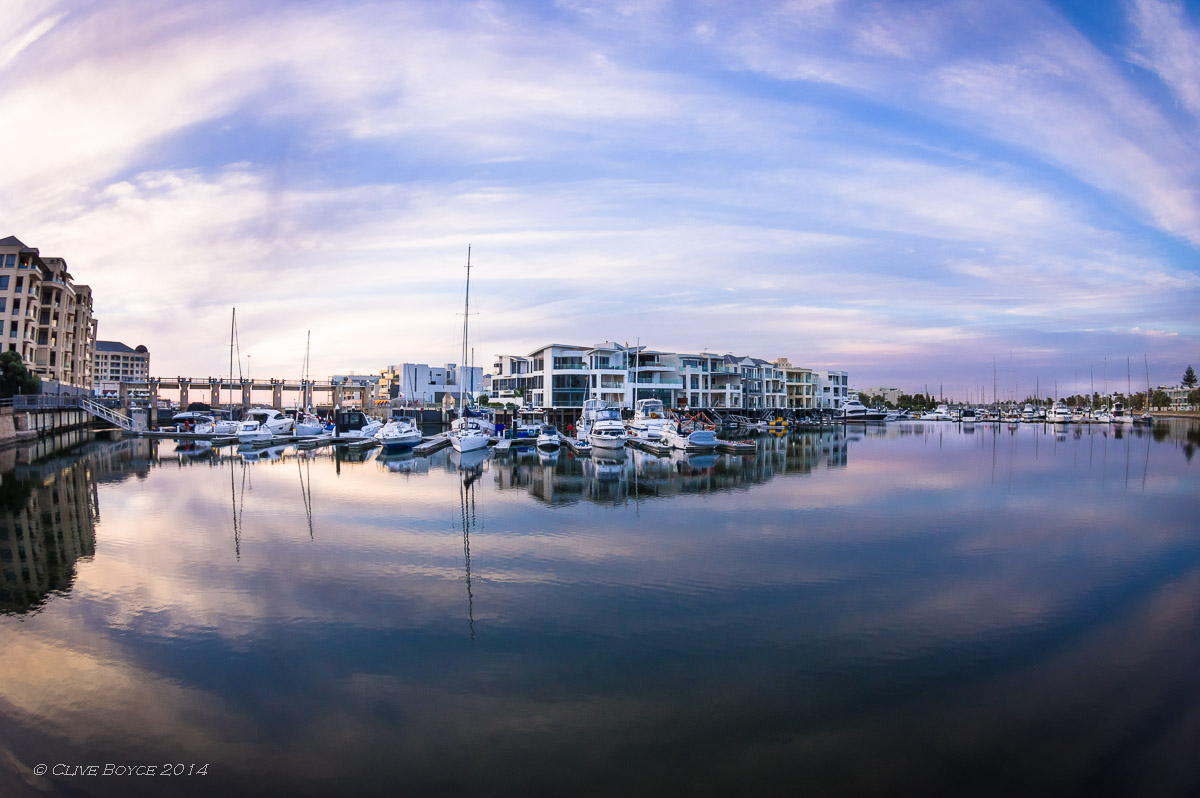 Natural symmetry, accentuated by the fishy-ness down at the 11mm focal length.

Nothing spectacular as the sun set. Too much low cloud on the horizon to allow the higher clouds to colour up. Interesting crisscrossing effect though, with the lower cloud coming in from the north west and some higher cirrus streaming in from the south west. 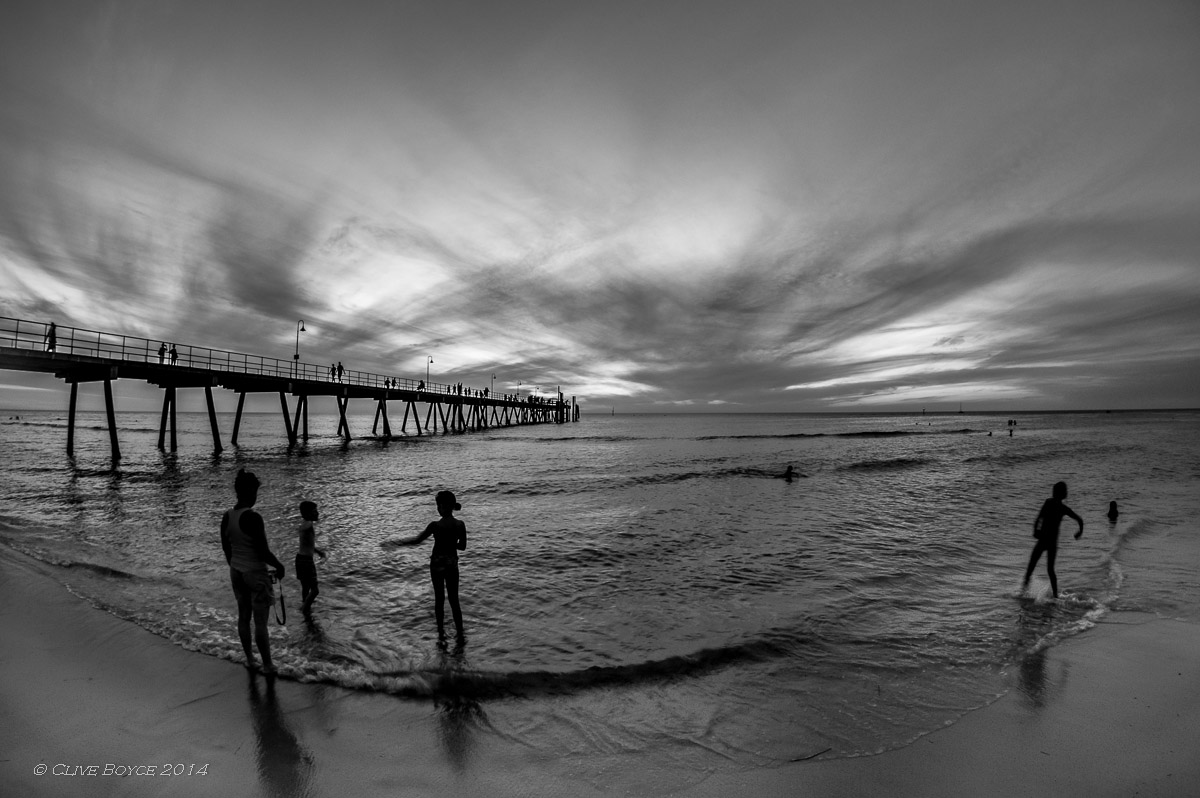 Colours were blah, so a switch to black and white. 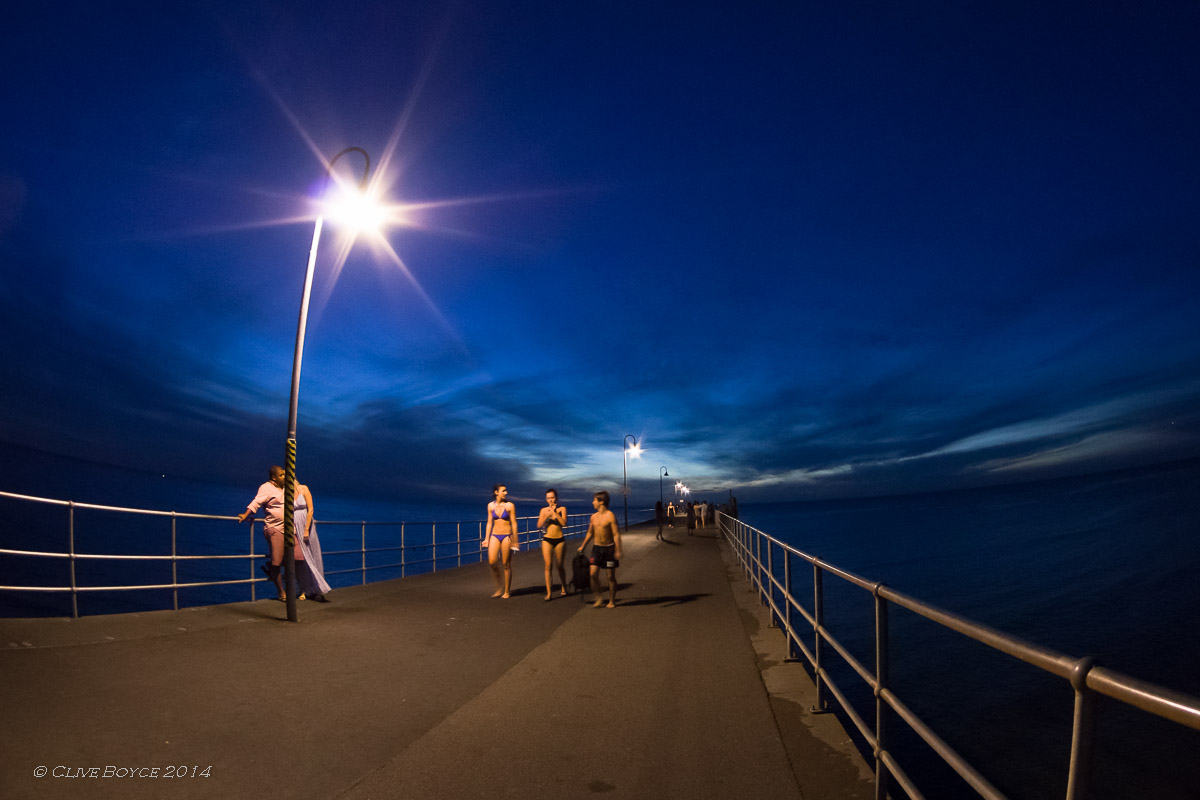 This was a hot week in Adelaide, and the temperature was still in the low 30’s after dark.  Nice blue hour colours. Pity the light pole was poorly placed in front of the canoodling couple.

The next collection of images is from a second trip to Glenelg a week after the first.  Sitting at home around 7:30pm , it looked as though a really nice sunset might develop, so I hopped in the car for the 20 minute trip to Glenelg. Well, the sunset was impressive, only problem was that all the good bits occurred while I was still five minutes up the road from the beach. Que sera sera.

What was left when I hit the beach. Case of work with what you have in front of you, and I do like the moodiness of this image. 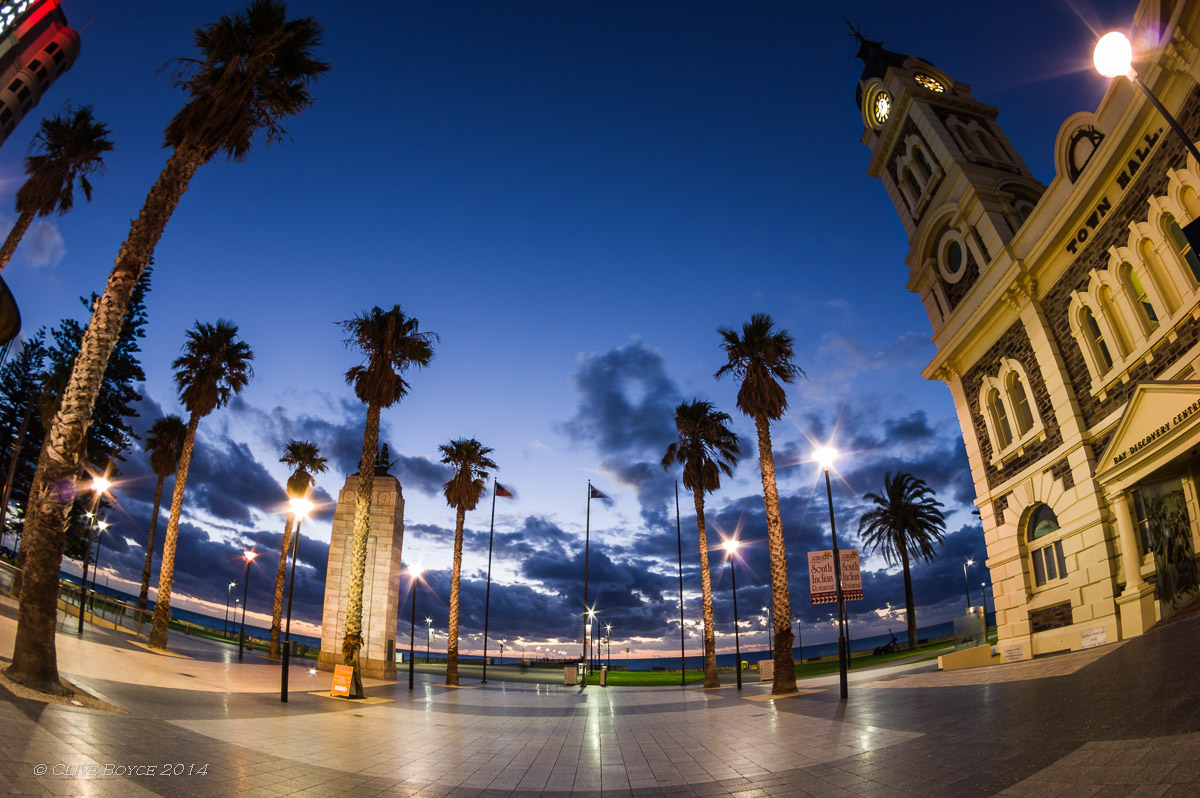 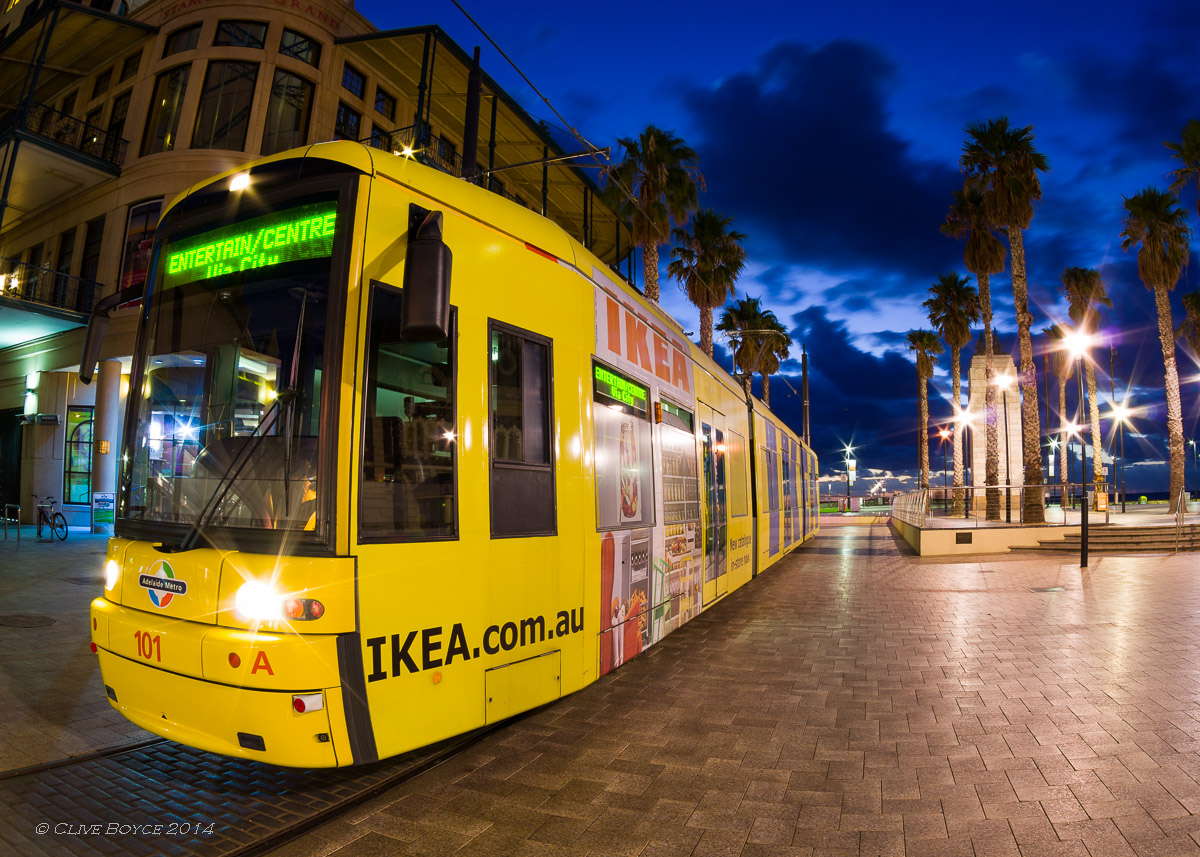 After an hour or so toiling with an Allen key and a No.2 Phillips Head screwdriver, voilà, a fully assembled flat pack tram. But I wonder where the left-over bolt was meant to go? It was in a plastic bag labelled “Brakes”. Nah, couldn’t have been important.

Fun with a fisheye