Just before Christmas, I was over in Melbourne for a business trip and found myself with a free evening to explore the Southbank area across the Yarra River from the city centre.

Arriving from Adelaide on a late afternoon flight, I dropped my bag at the city hotel I was calling home for the night and then made my way to the southern end of Elizabeth Street where I located and followed the passageway under the Flinders Street station.  The passageway emerges onto the city-side bank of the Yarra River adjacent to the Southbank footbridge, one of several bridges that provide convenient pedestrian access to Southbank from the city.

Melbourne has done a great job revitalising its city areas and Southbank was full of people out enjoying a pleasant summer’s evening. The Southbank footbridge was all dressed up for Christmas, providing some immediate photographic interest.

During December, I was participating in a photo challenge on the Pentax Forums website. The objective of the photo challenge is to nominate a particular lens and then post an image made using that lens each and every day for a calendar month. Sounds easy, but as a month wears on, looking for something worthy to photograph and post day in and day out is where the ‘challenge’ kicks in. All sorts of lens are used by participants, with older manual lenses being quite commonly nominated. December tends to be the one month of the year where the challenge rules are bent a little. I decided to nominate a lens series rather than a single lens, and use each of my Pentax M series lenses for a couple of days apiece. The Pentax M series was Pentax’s line of manual lenses produced from the late seventies to the early 1980’s. For sentimental reasons, I have ended up collecting eleven different M lenses from 20mm to 300mm focal lengths, sourced from around the world, mostly via online secondhand markets.

A Pentax M 200mm F4 telephoto lens accompanied me to Melbourne as this was the challenge lens in use for the days I was away. The early images in this post are taken with the M 200.

I arrived at the Southbank bridge around 7:30pm while there was still plenty of light about. Eventually, as the sunset approached around 9pm, the light faded to a level that made continued use of a long telephoto impractical, and at that point I reverted to my Tamron 17-50mm F2.8 zoom. 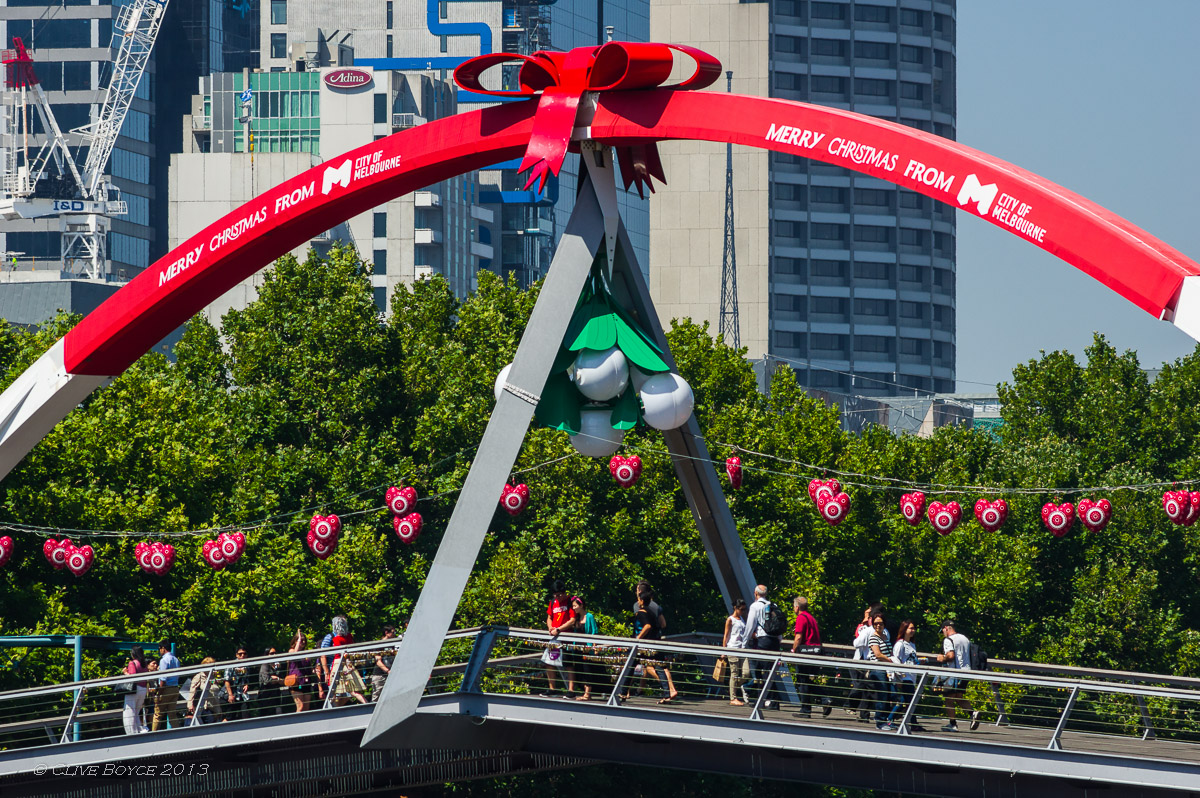 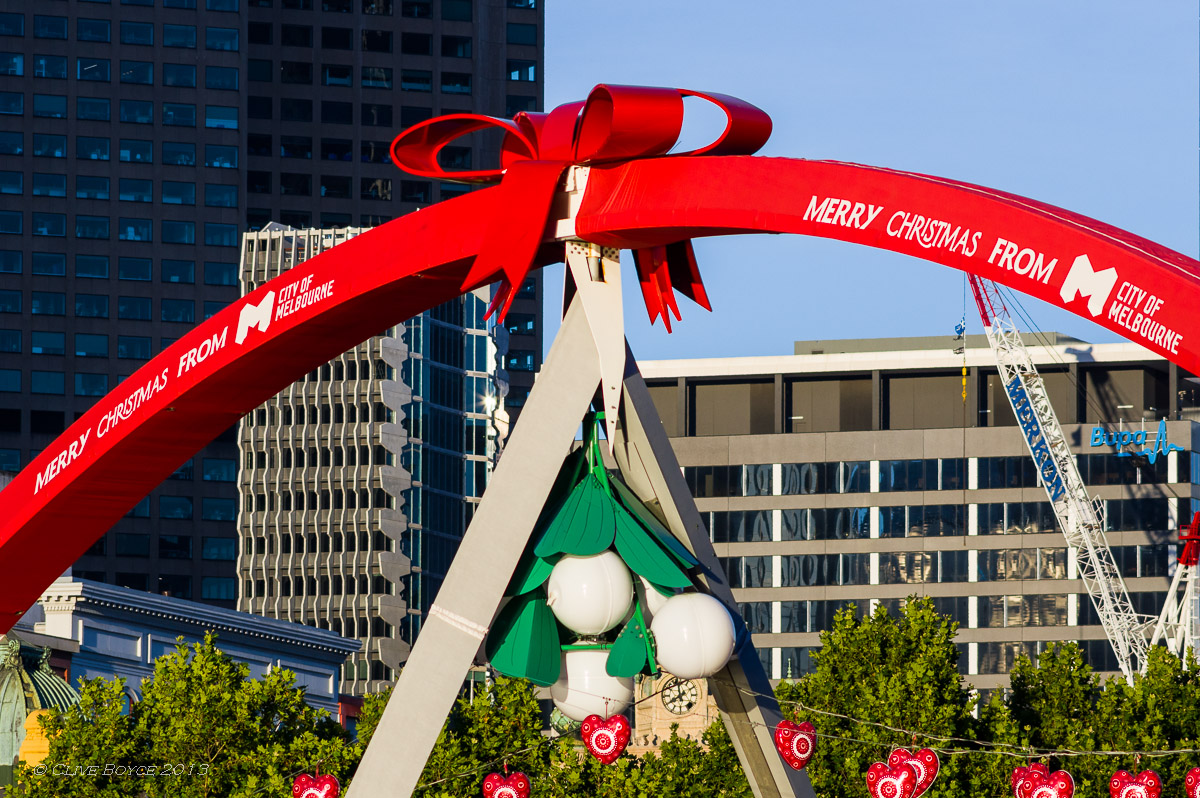 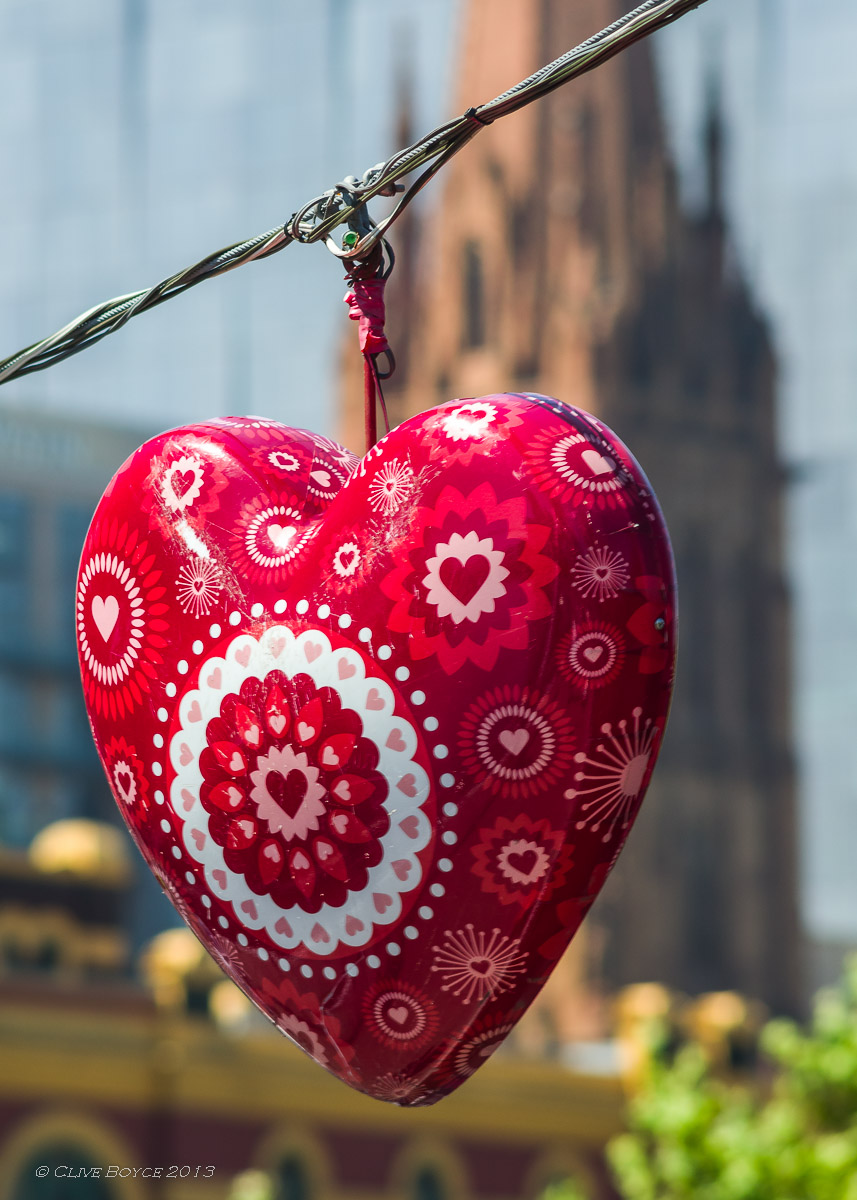 Love locks have proliferated worldwide over the past few years and the Southbank footbridge is well adorned by locks. There must be a fair wad of keys now well-buried in the Yarra mud below… 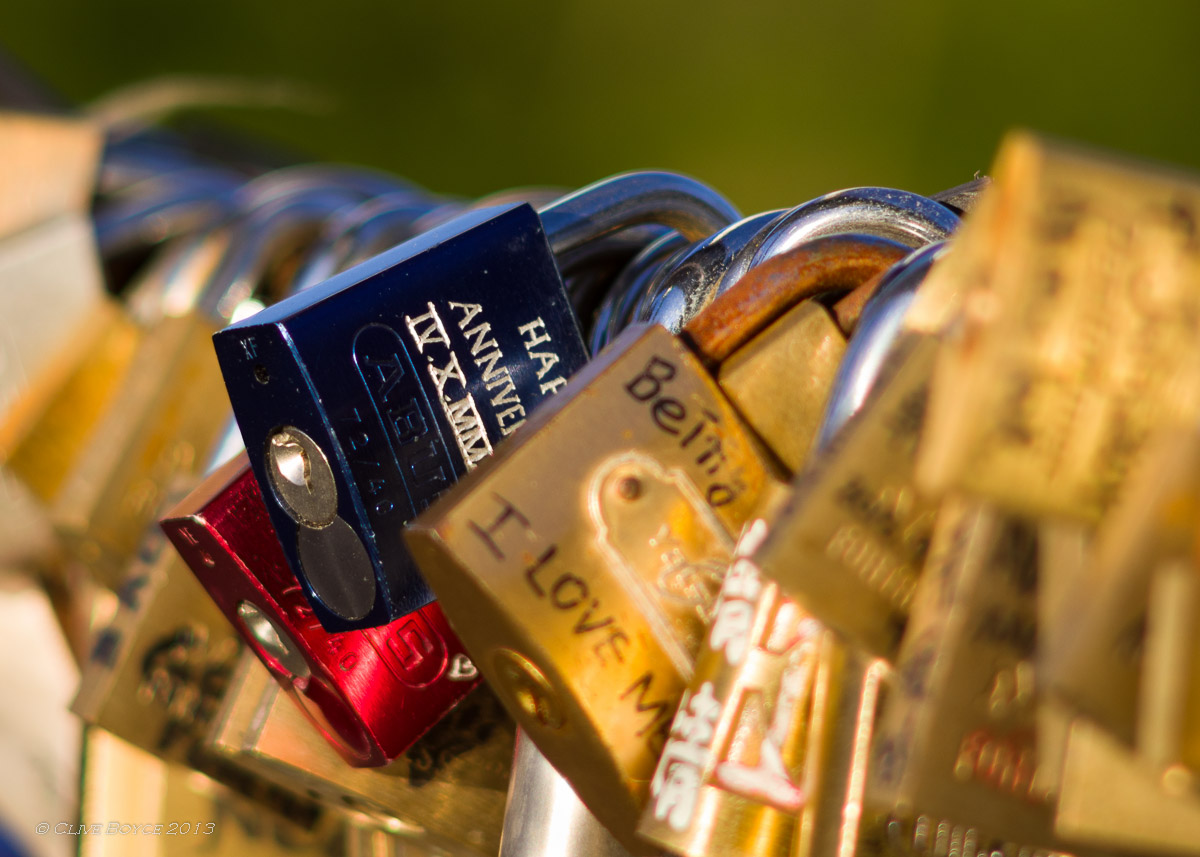 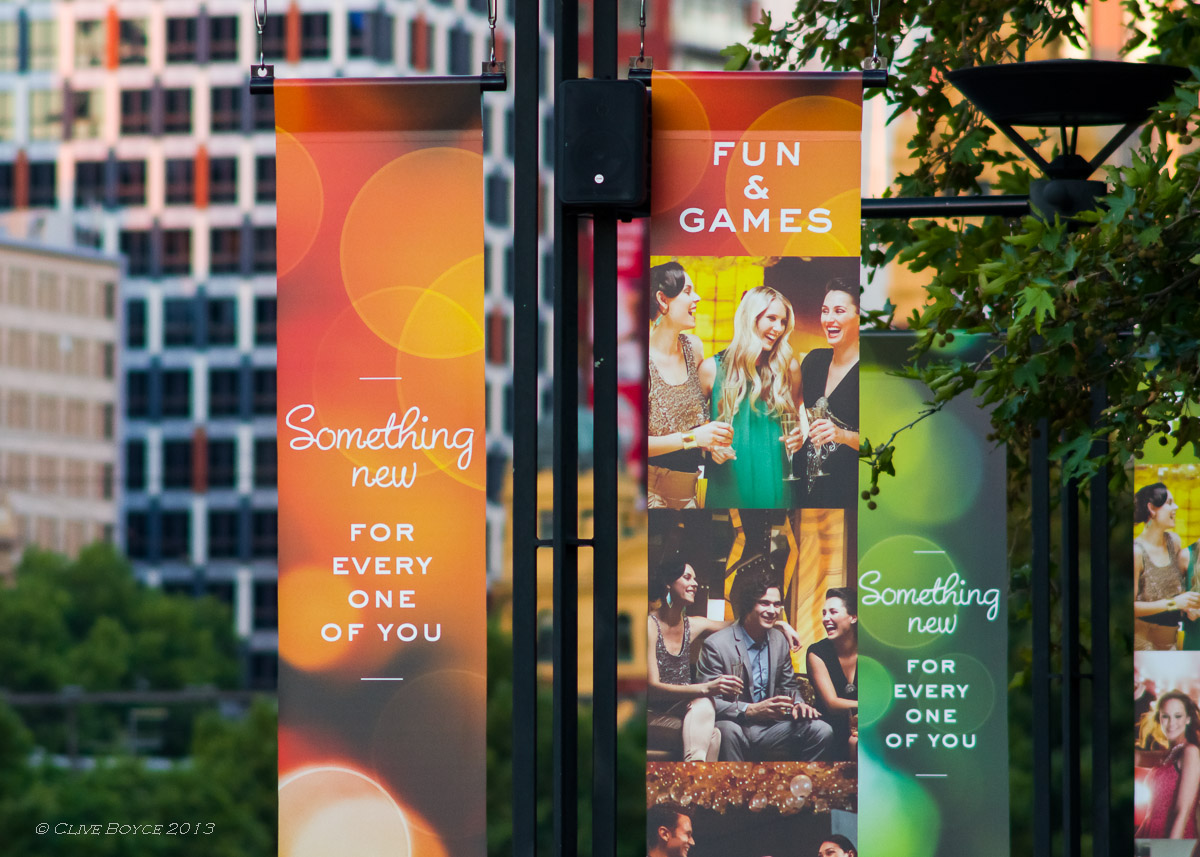 Melbourne has never been afraid of promoting itself.

Punters enjoying a sundowner at the Ponyfish Bar. The bar is located in the middle of the Yarra on a tiny man-made island formed around a pylon of the footbridge. I foresee a need to undertake a more thorough inspection of this venue on a later trip!

The dome and clock tower of Flinders Street station just across the river. 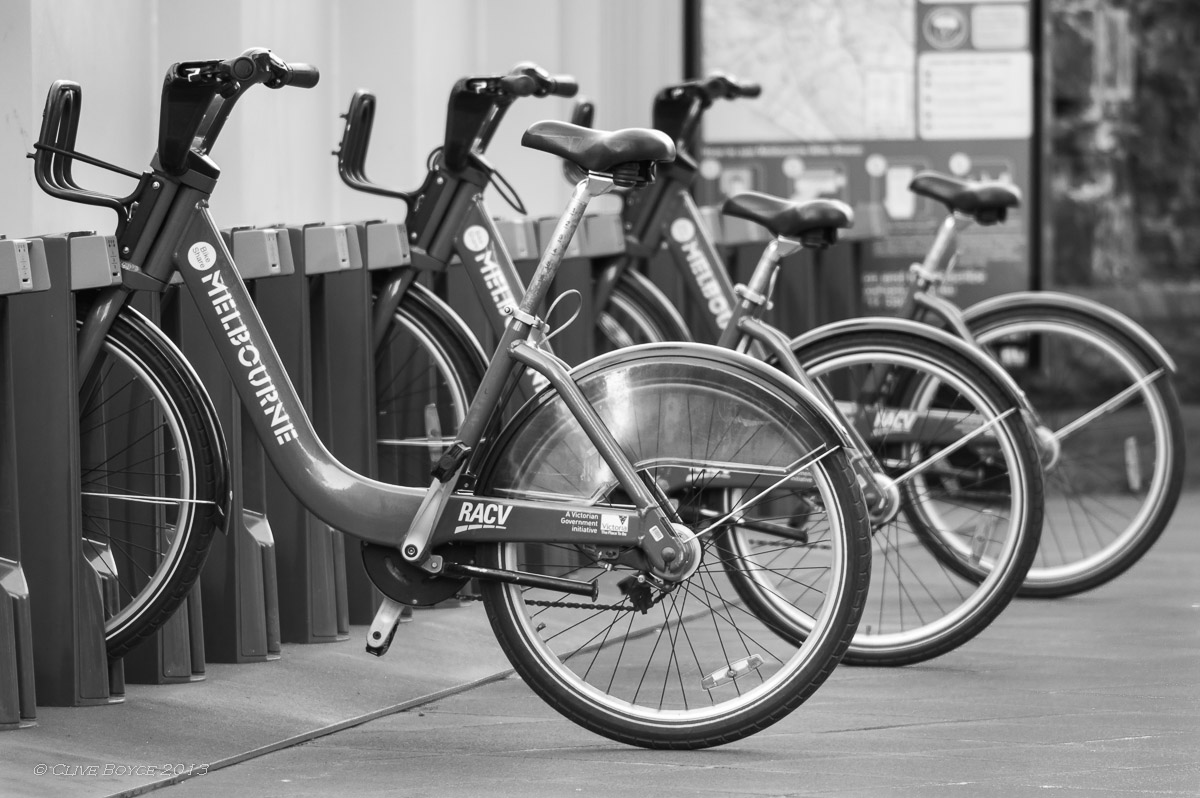 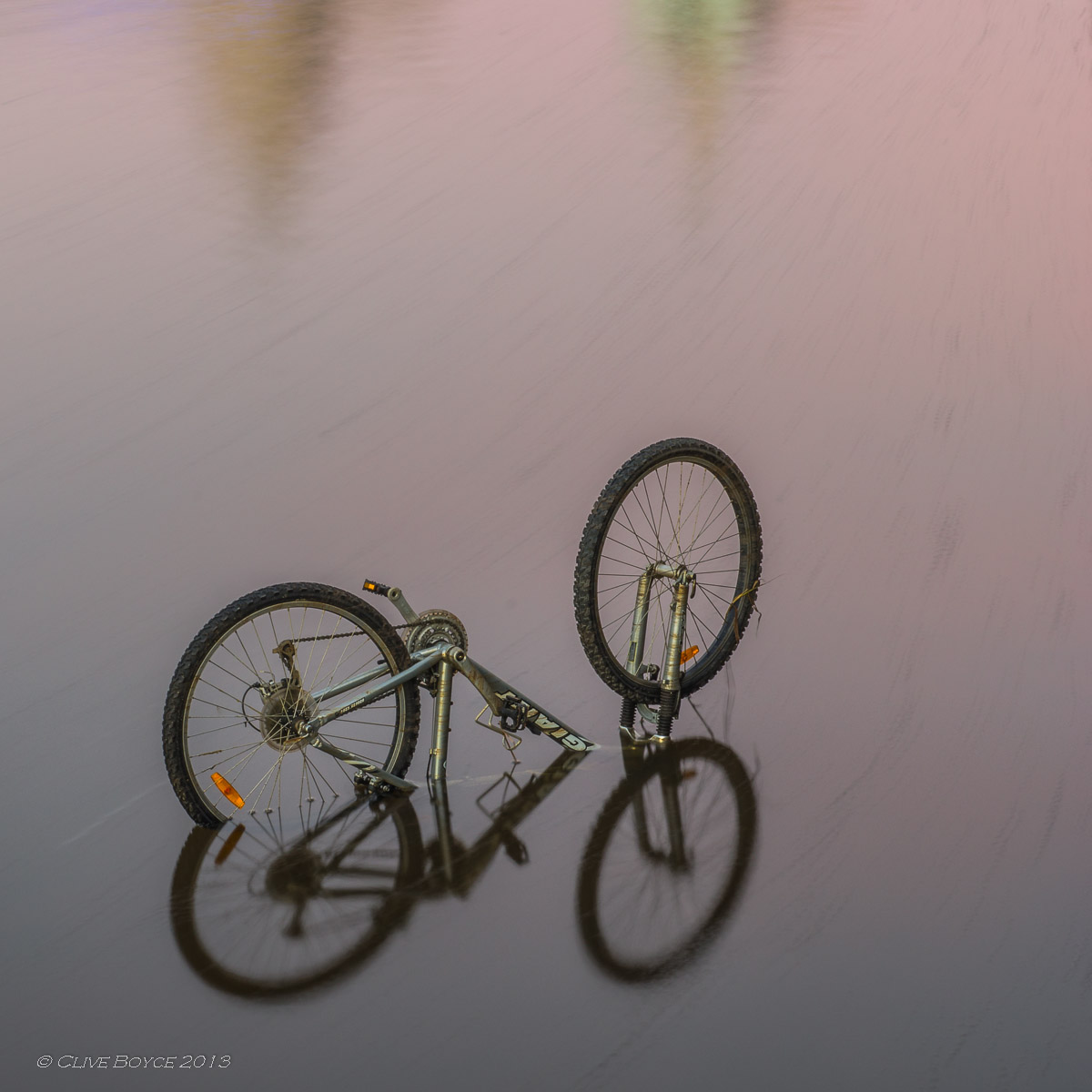 One of the features of Southbank is the Gas Brigades located along the river frontage of the Crown Casino – eight towers that release a series of gas fuelled fireballs on the hour each evening.  The small fireballs are three metres across, the large ones are seven metres across. This is one of the little ones. The big ones radiate enough heat to give you a nice warm feeling. 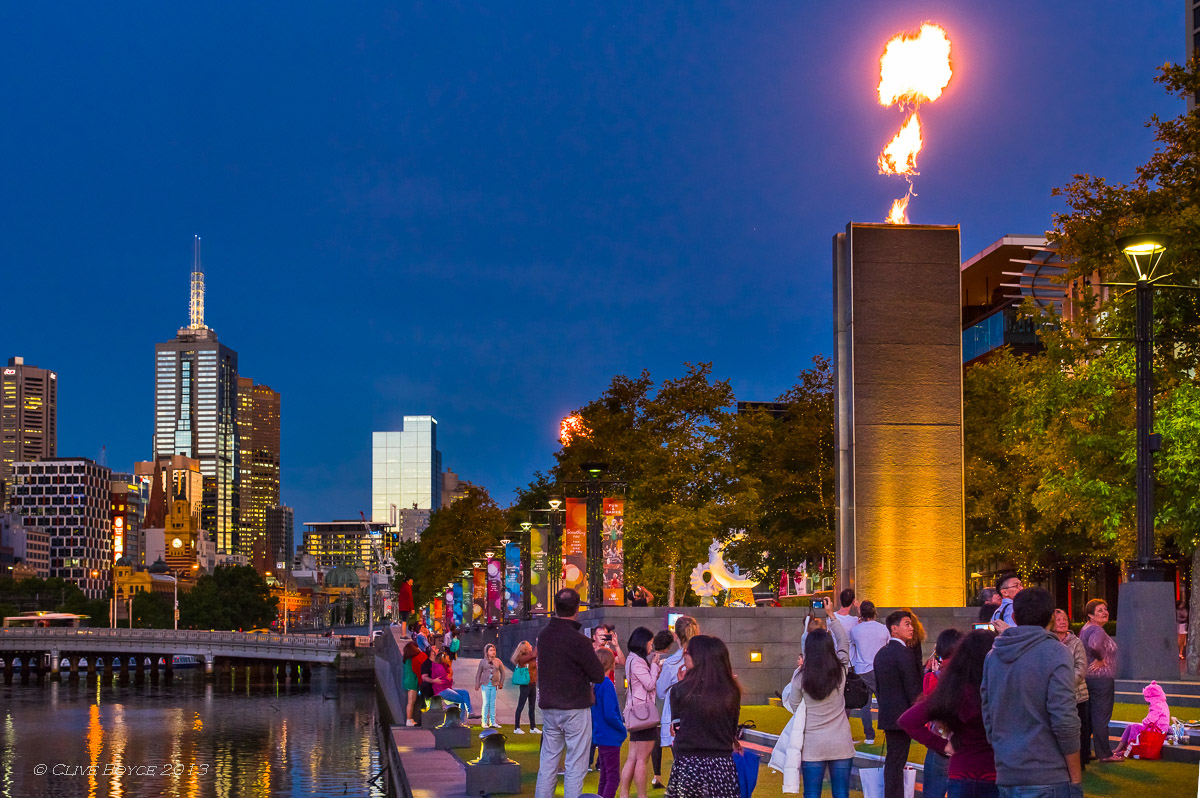 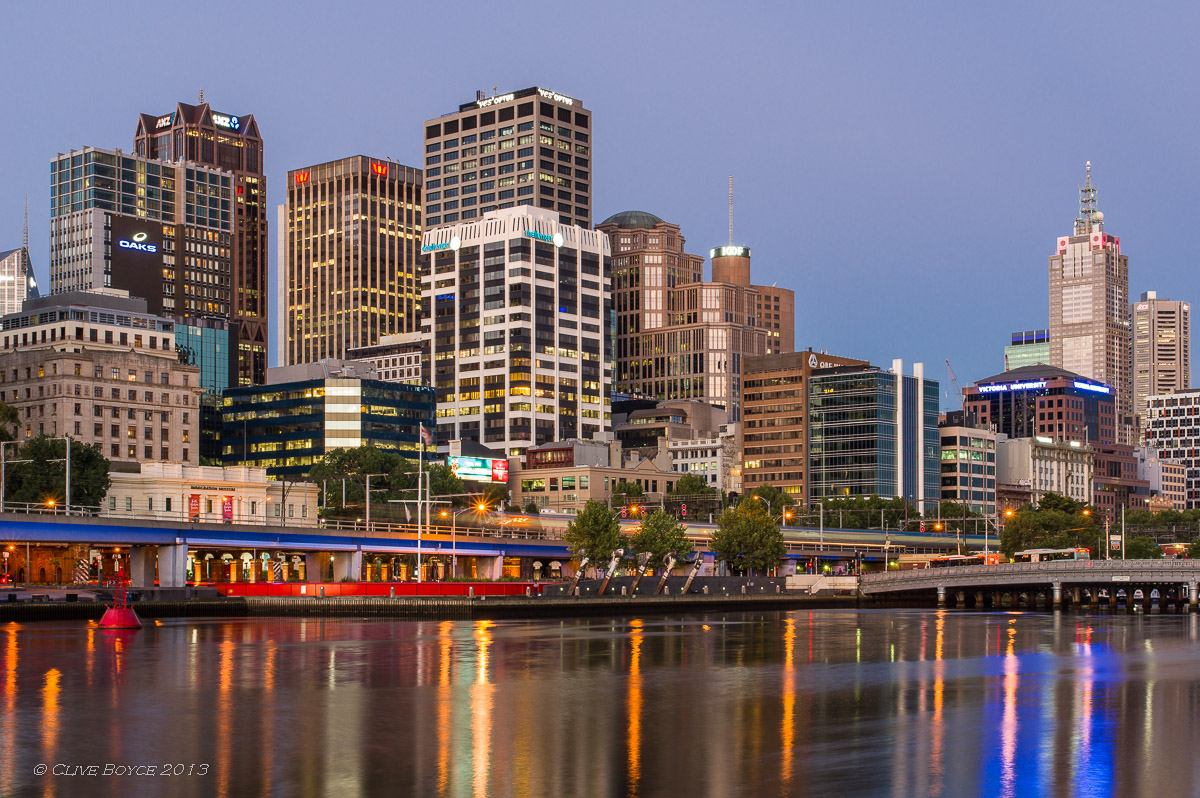 A bonus I hadn’t been expecting was the rise of a full moon just after dusk. It turned a great scene into something quite stunning.

And to finish, back to where I started at the Southbank footbridge, snapping at other photo snappers. 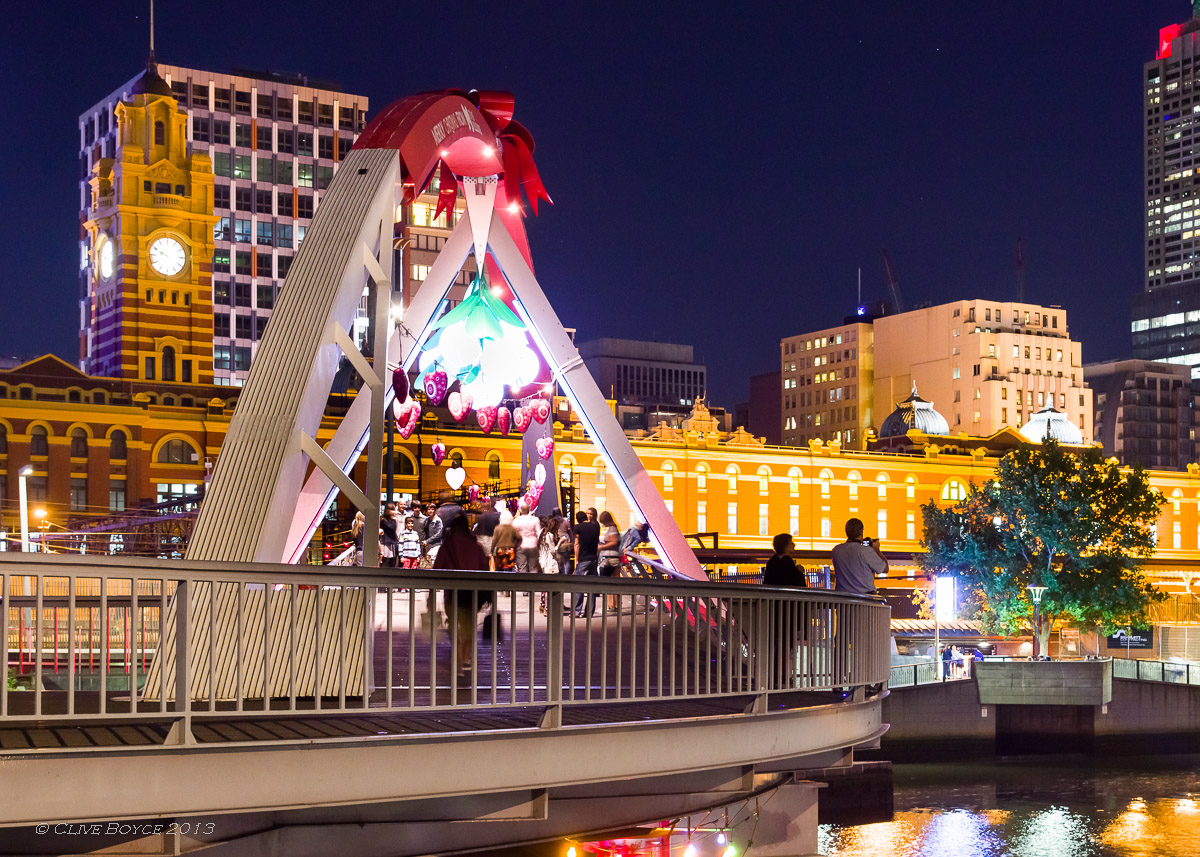 I acquired Pentax’s latest flagship dSLR camera, the Pentax K-3, just before travelling to Melbourne. The K-3 sports a 24 megapixel sensor and a solidly built weather resistant body. The sensor has no anti-aliasing filter, maximising the potential resolution of the camera. Other than a few test images, this was the first outing of the K-3 and I was keen to see how it performed.  The quick answer was ‘very well’. Compared to my Pentax K-x, the improvement in dynamic range (the ability to capture both bright and dark detail) was immediately apparent. Exposure metering was also much more accurate and did a very good job of avoiding burnt out highlights.

As mentioned at the beginning of the post, the early images were made with a Pentax M 200mm F4 lens. I had viewed the M 200 as possibly the weakest link in the M series, and have given my copy very little use. It will never be a stellar performer but I was pleasantly surprised with what it could produce with the K-3. The lens is quite prone to chromatic aberrations that reveals itself as purple and green fringing in the out of focus areas of an image – a common trait of older telephoto lenses. Using the lens in Melbourne, I found the trick to good images was to get focusing absolutely spot on – this prevented colour fringing turning up in the key areas of the image and reducing apparent sharpness. Modest fringing elsewhere mostly cleaned up fairly easily when the images were processed in Lightroom, although you will observe some green fringing remaining in heavily out of focus areas. A 200mm lens has a very narrow depth of field, making it easy to be just that little bit off-focus. The K-3 offers focus peaking in Liveview mode and was a godsend for getting focus just right. I quickly found myself relying upon it to focus the M 200.

As the sun set, I reverted to my Tamron 17-50mm F2.8 walkabout lens for the later images, starting with the bike that had found its way into the Yarra.

Melbourne is the capital of the state of Victoria and Australia’s second largest city. Southbank is on the southern side of the Yarra River and is home to numerous restaurants, bars and the Crown Casino complex. A very nice place for a meal and a stroll.

2 thoughts on “Melbourne by Twilight”