It’s not often that I get up at dawn, but my current enthusiasm for photography is encouraging me to try to see in the start of the day at least once anytime I am away on holidays . Continuing with the visit to the River Murray that has been the subject of other recent posts, this post captures the area at first light. Fortunately for me, the final day of the October long weekend was the second day of daylight saving for summer 2013-14, giving me an extra hour of sleep before the pre-dawn light started to appear 🙂

The view from the front door of the tent a little before 6am.

Dawn breaks over the lagoon 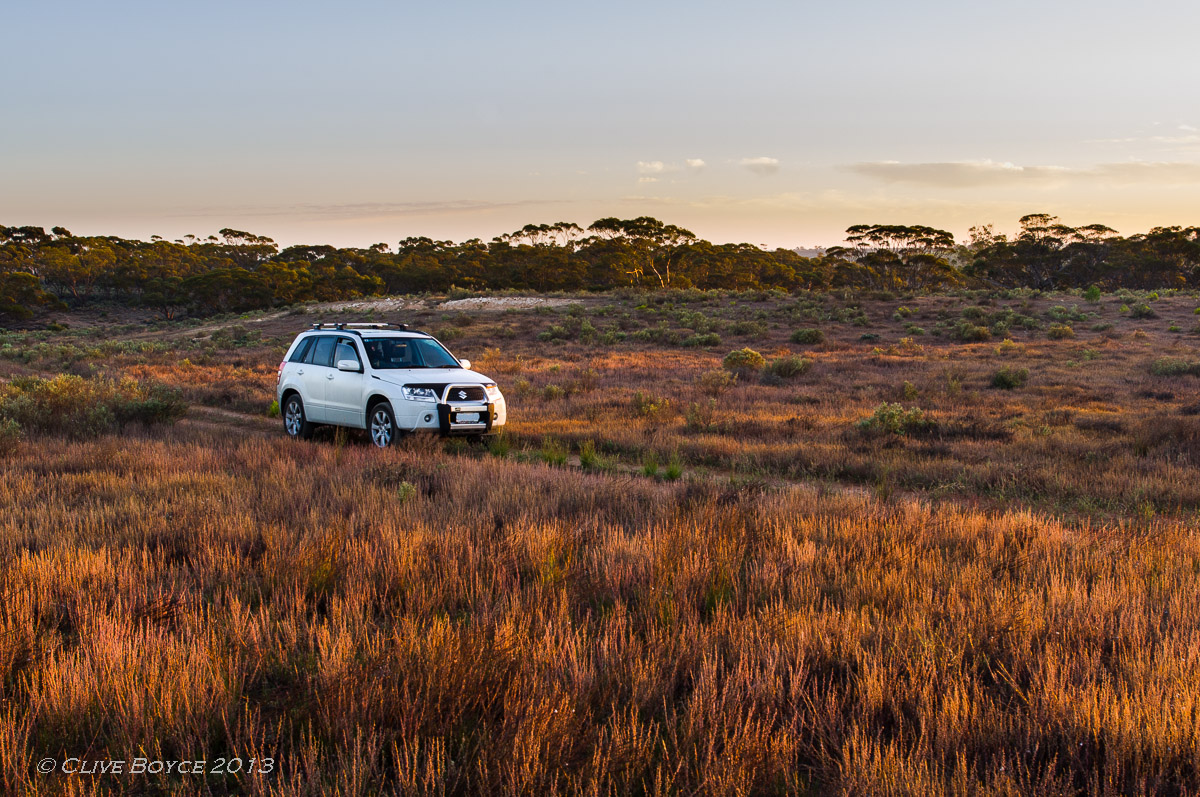 The flat plains atop the cliffs allow dawn’s first few direct rays of light to run across the countryside near parallel to the ground. On the right morning, the outcome can be some absolutely magic but short lived colours and shadows. This was one of those mornings!

Heading back down off the cliff tops to the lagoons’ outflow creek. The steel decking is the top of the railway flat car seen being used as a bridge in the Silent Sentinels post. I was confused by a pop-pop-popping sound while taking this shot. A close look around revealed European carp mouthing the water surface at the edge of the reeds. The ripples you see on the water were being made by the carp. European carp are yet another imported environmental disaster (along with rabbits, cane toads, and foxes), displacing many of the River Murray’s native fish and muddying up the water. They are a declared noxious pest, and it is illegal to return a caught carp (say that ten times quickly after a few drinks!) to the water. Hasn’t stopped them breeding in the millions unfortunately.

Incoming Pelicans. This is a crop from the centre of the prior picture. Silently flying up the creek were a dozen pelicans, heading from the river to the lagoons. 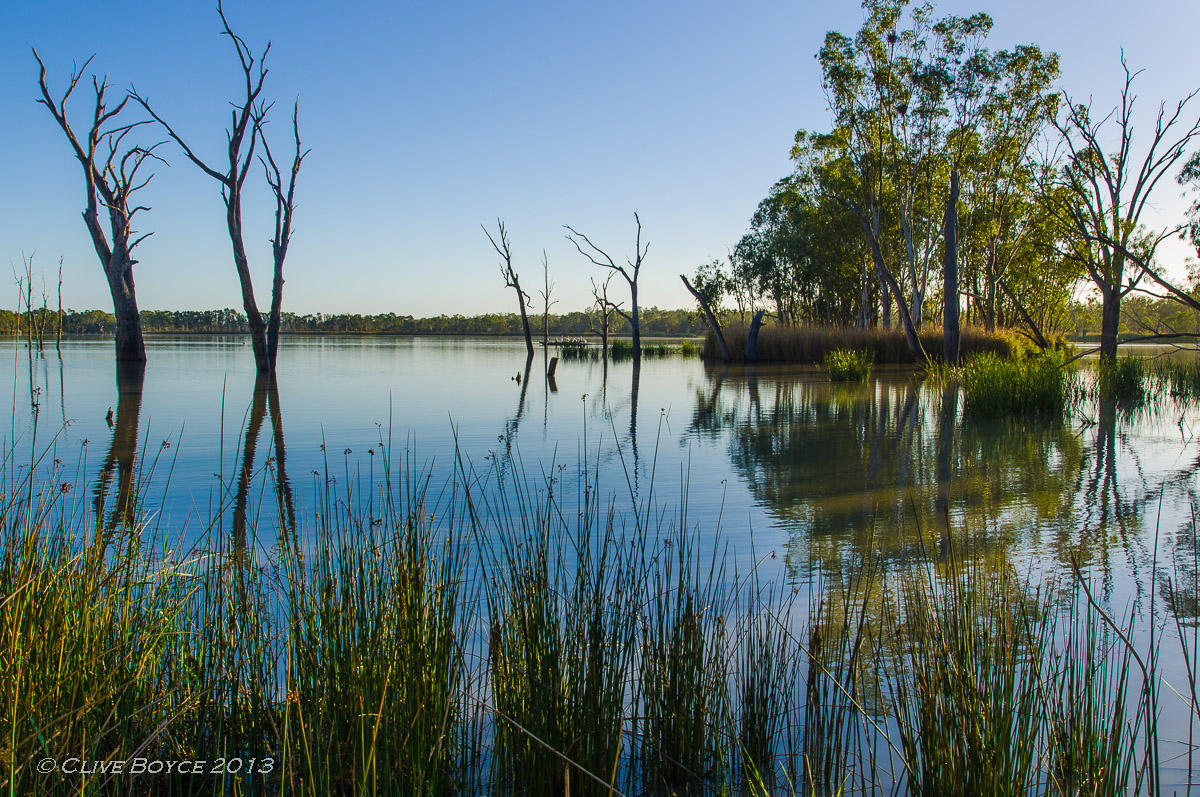 As the light strengthened and the early morning feel was lost, I started to head back to camp. Along the way, some farming equipment abandoned to the elements caught my eye…

Dillapidated wooden wagon slowing wasting away.  Behind is a former shearing shed. The property was originally a sheep run, but the sheep were taken off in the 1980’s and the native vegetation (other than a section used for grape growing) has been allowed to slowly recover and today is grazed by roos and wombats. Before the Murray became a regulated waterway in the 1930’s, the lagoons would seasonally flood and then drain, the lagoon floor then creating rich pasture for the sheep within an otherwise arid landscape. Today, the lagoons are a constant 5 to 6 foot deep and now most people visiting the area would interpret this as ‘normal’. Another example of how man changes nature and then soon looses sight of what went before for thousands of years.

An even more dillapidated cart.

No longer so hot …an old wood stove made by Simpson in Adelaide. From a era when the term “whitegoods” hadn’t even been coined. Simpson was an Adelaide based appliance manufacturer for over 150 years.  The business ended up under the ownership of Electrolux in 1999 and the Adelaide plant closed down in the mid-2000’s. Despite Simpson being an iconic Australian brand, I found it difficult to find much history of the company on the internet. If you are aware of any sites providing a detailed history, I invite you to pass on the links by using the Comments form at the bottom of this page. 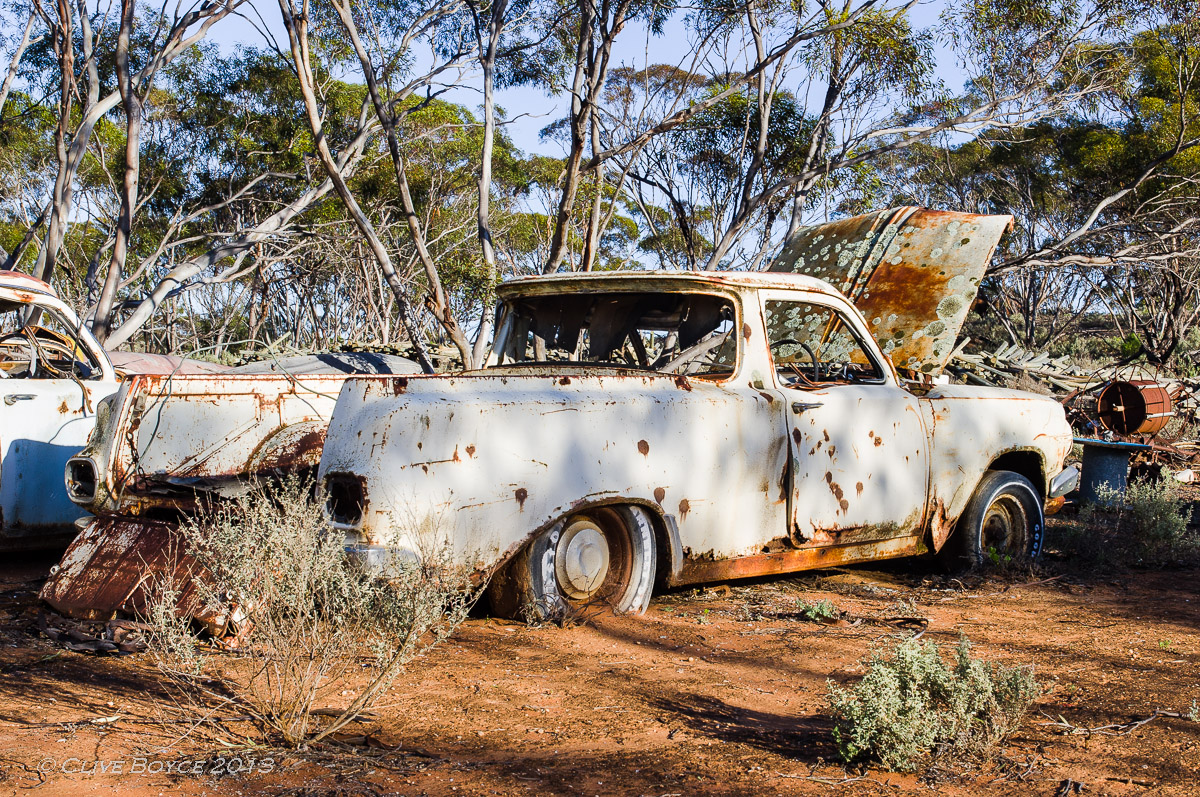 Olden Holden and friend. Your classic EJ (1962-1963) Holden sedan here. No idea as to the brand/model of the light truck, but obviously much older than the Holden. If you recognise the model, please let me know by using the Comments form at the bottom of this page.

And where was I?

Somewhere in the general vicinity of Morgan, South Australia.

More from the Murray

← Back to the Photo Morsels home page.