The centenary of the first entry of the Royal Australian Navy’s fleet into Sydney will be commemorated in October 2013. Both naval and tall ships have been invited to Sydney to celebrate the event. Indications are that there will be six international tall ships coming to Australia for the occasion.

I happened, by pure co-incidence, to be in Perth five weeks ago when the three Dutch tall ships arrived in Australia from South Africa via Mauritius. They’d come into Fremantle (Perth’s main port) a day before the official welcome, I suspect to avoid some pretty foul weather that was on its way.

I wonder where these ships hail from? The Oosterschelde flying the Dutch flag with the Europa behind. 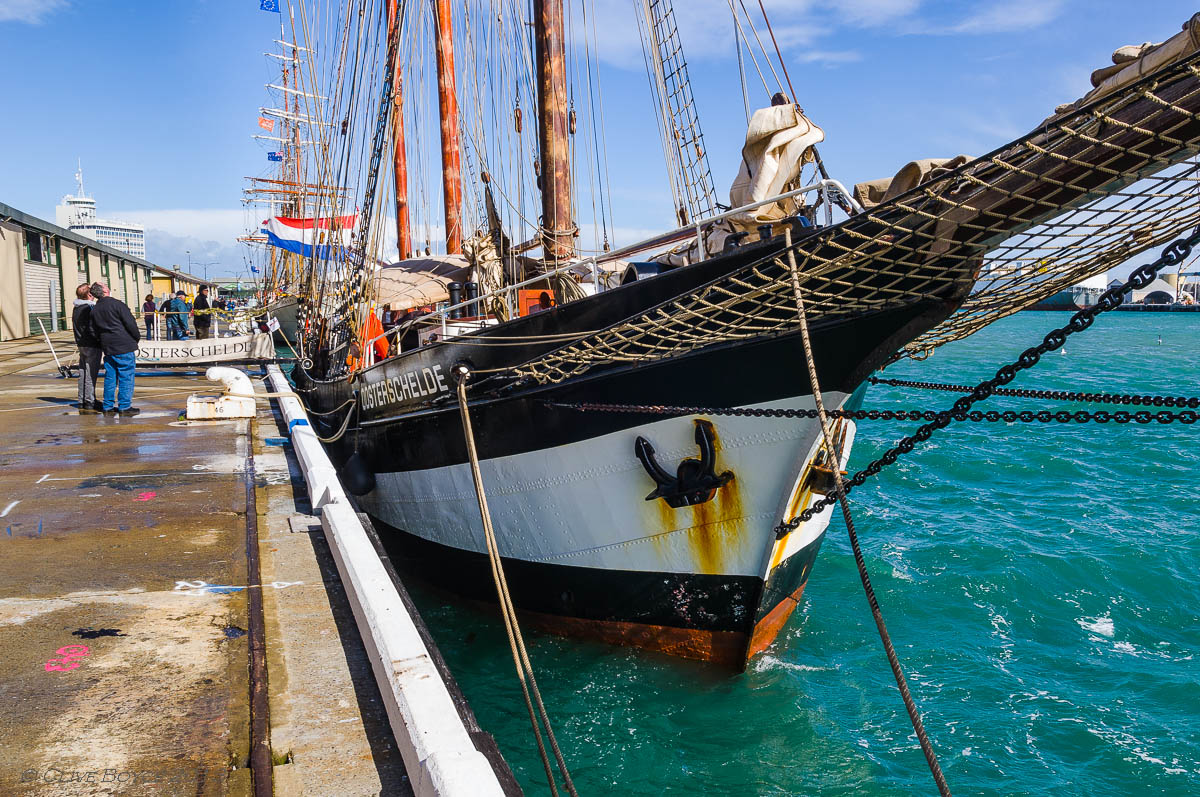 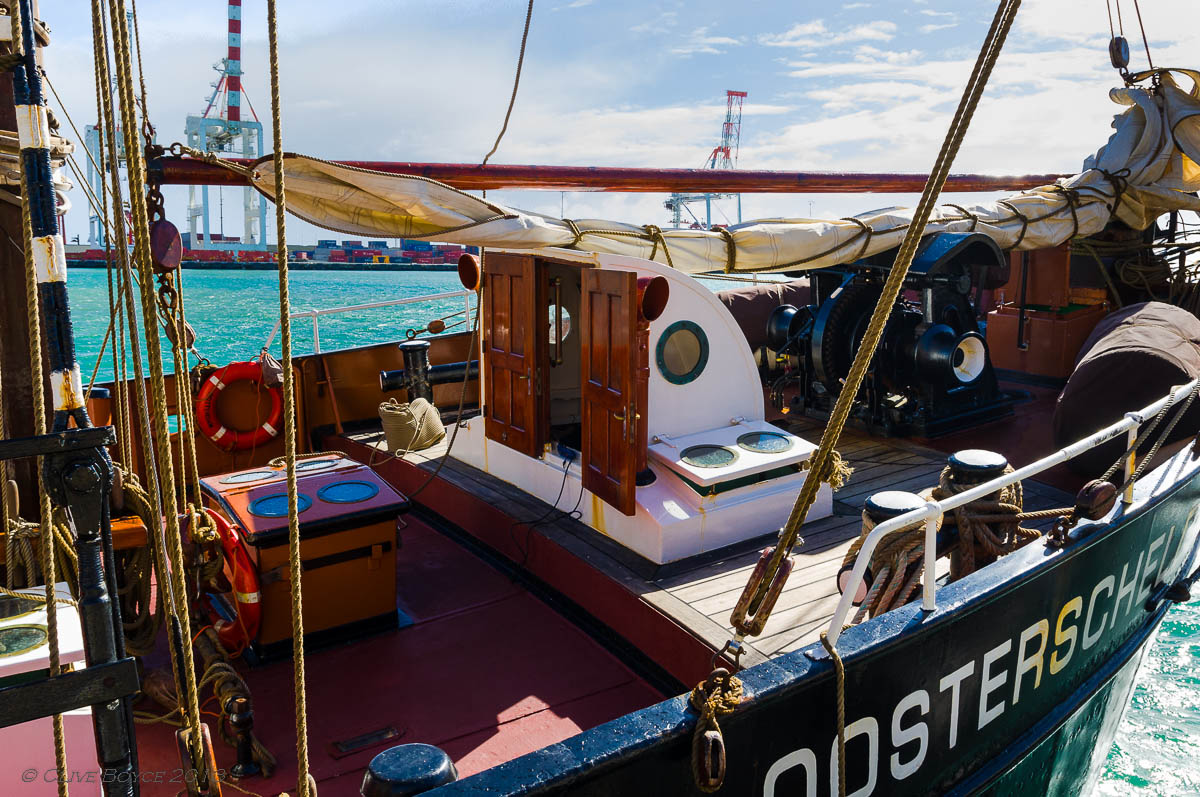 The Europa. She spent her commercial life as a German lightship, the “Senator Brockes”, and in use on the River Elbe until 1977. A Dutchman bought the vessel in 1985 and in 1994 she was fully restored as a barque, a three-masted square rigged vessel, and retrofitted for sail-training.  She’s a magnificent sight, particularly under sail, as you will see in a later post. 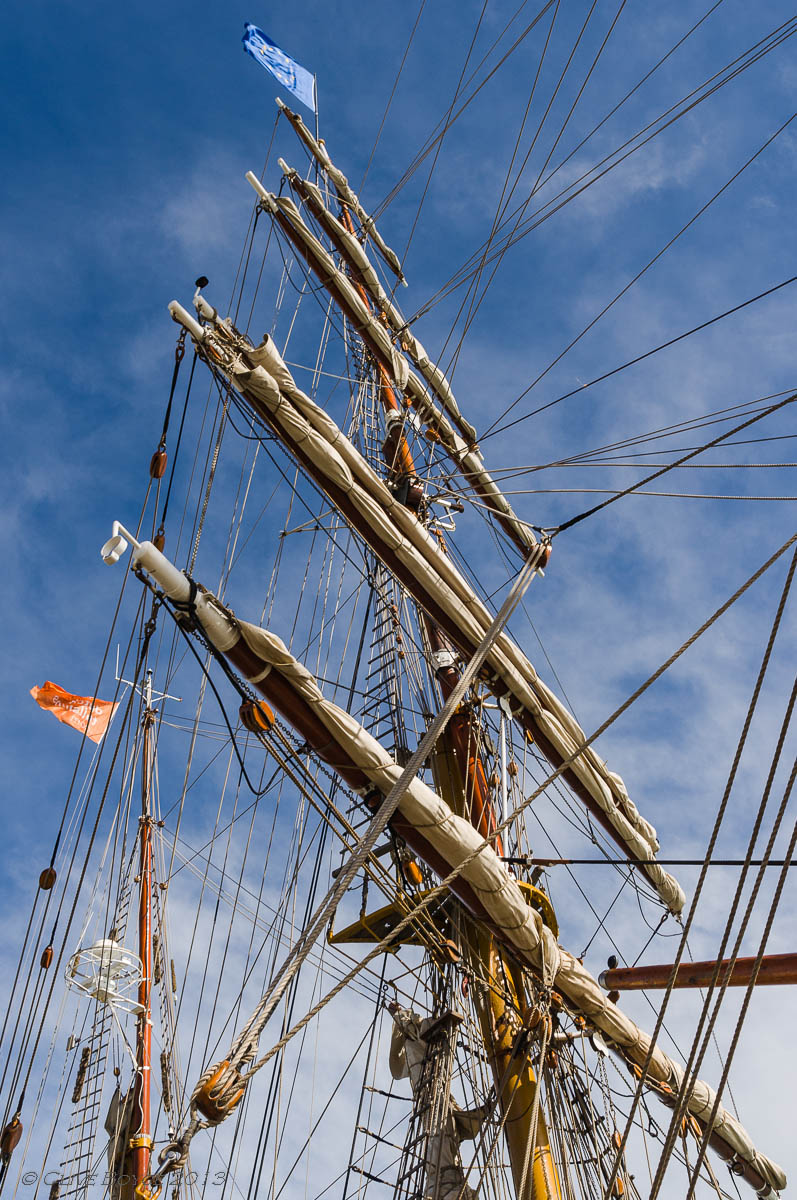 Looking up the Europa’s main mast. Just a few ropes for the crew to master!

Sitting in the sun on the Europa’s main deck, a crew member splices a rope. Looks peaceful here on the deck.  Compare and contrast to this shot on the Europa’s website:  Not so peaceful 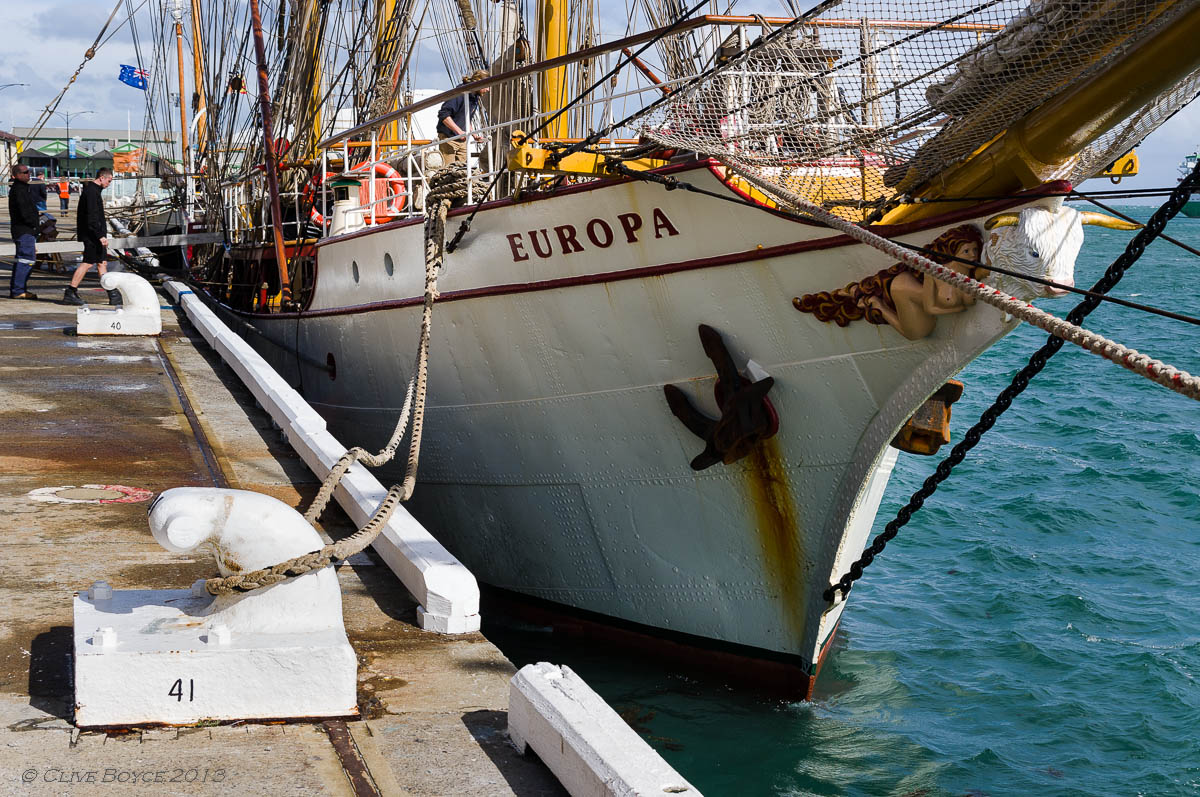 In Greek mythology, Europa was one of the god Zeus’s many love interests. The legend of Europa and Zeus begins when the ruler of the Olympian gods glimpses the young woman one day. Zeus is instantly overcome by her beauty and grace. The god immediately comes up with a plan – he assumes the form of a glorious white bull and swims to the shore on which Europa and her female companions are playing.  The bull is so sleek and handsome, not to mention gentle, that the maidens all take turns stroking and petting the pretty creature. In time, Europa feels comfortable enough with the bull to climb upon his back for a little ride.
However, as soon as she is safely seated, the bull moves toward the sea and carries her off to Crete.  Upon arriving in Crete, Zeus finally casts off his disguise and reveals his divine identity to Europa, and Europa becomes one of the god’s lovers. The figurehead seen here was added to the ship in 2010 after the previous figurehead was lost in Antartica following an incident with an iceberg.

The third Dutch ship was the Tecla, a two masted gaff rigged schooner. She was originally a herring drifter in the North Sea. The above deck area has been kept pretty true to the original simple layout. No protection here from the elements. You’d need to be made of tough stuff for the long ocean legs. The Oostershelde and the Europa both have comfy wheel houses. 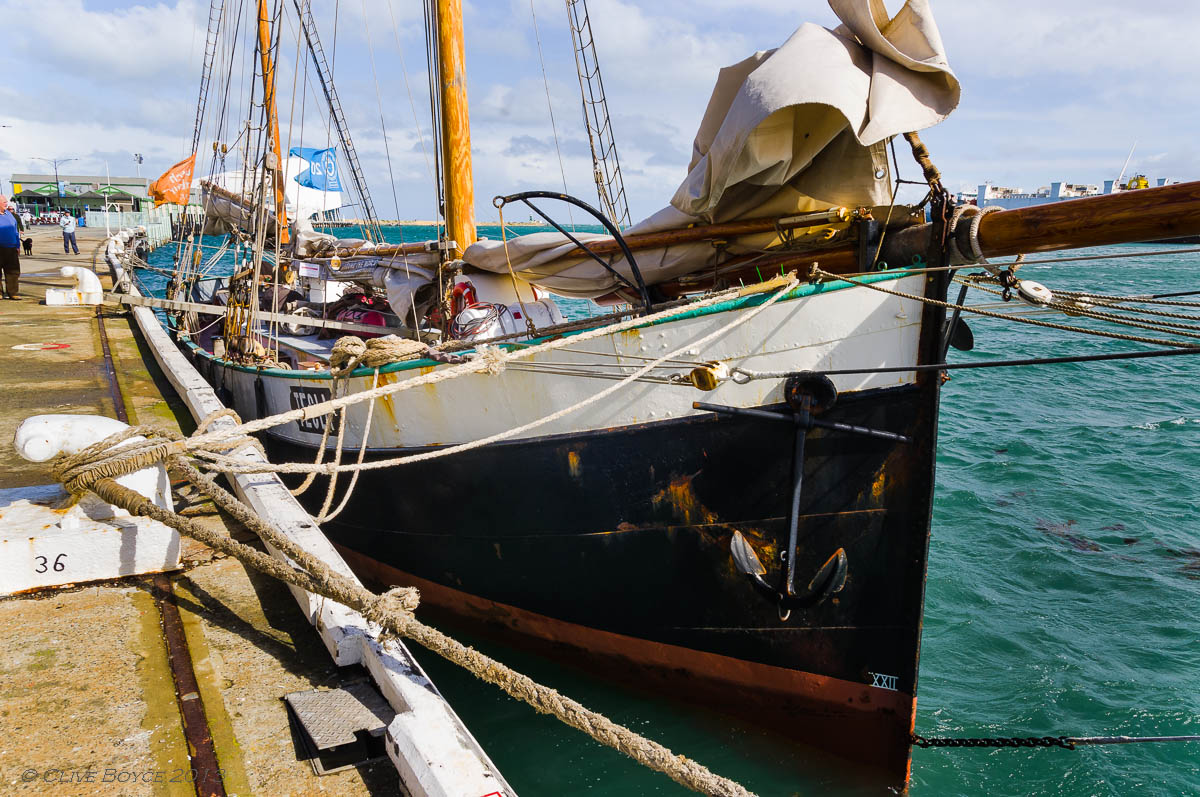 A no-nonsense working vessel is the Tecla.

A little further up the wharf, looking back at the ships. Suddenly they don’t look so big. Note the rapid deterioration in the weather since the first photo. The Europa has taken on a fair lean as all of that square rigging catches the increasingly stiff breeze. 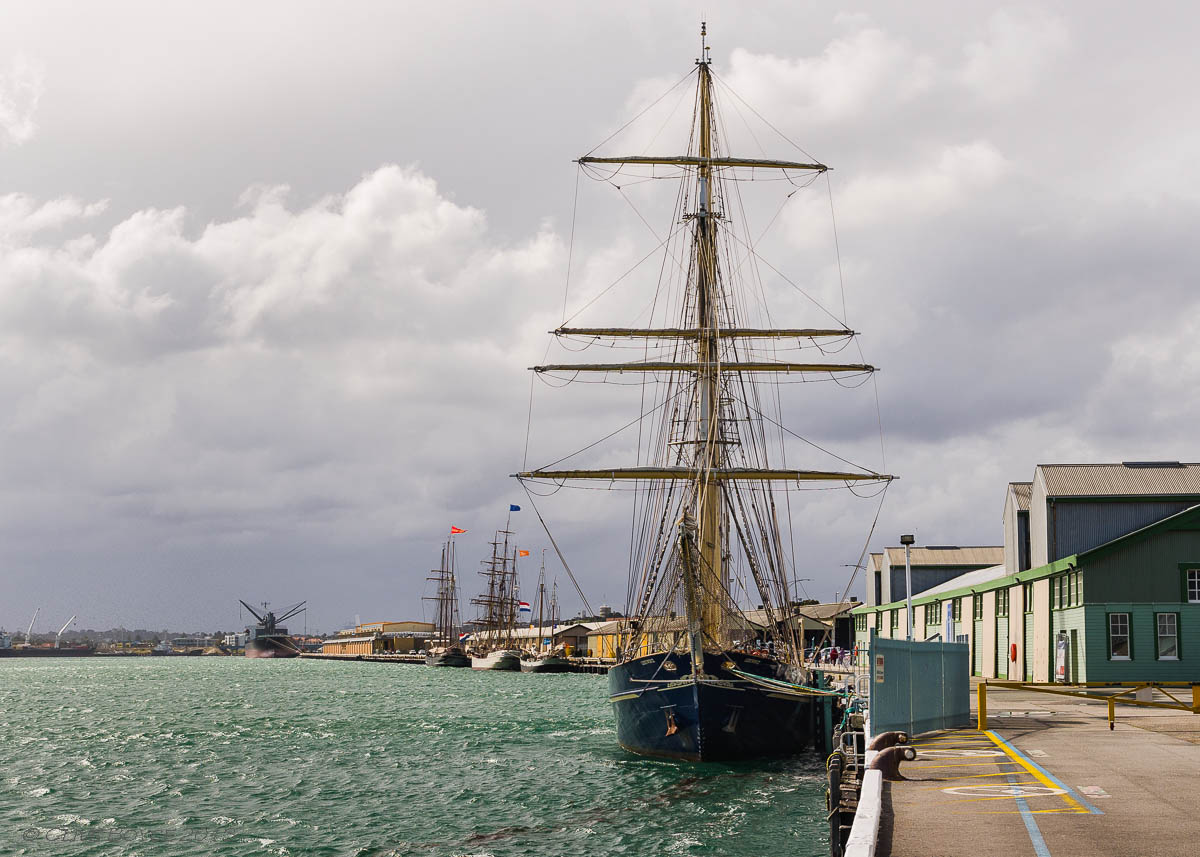 Some distance from the Dutch ship was the Leeuwin II, Australia’s largest sail training tall ship and based in Fremantle.  She is rigged as a three masted barquentine.

Unlike the Dutch tall ships, the Leeuwin II is of modern origin, built in Western Australia in 1986.  There is a connection to the Dutch ships though.  The original Leeuwin was a Dutch galleon that discovered and mapped some of the southwest corner of Australia in March 1622, and believed to be only the seventh European ship to sight the continent.

But leaving the main wharf area wasn’t the end of the day’s Dutch connection. Around in the fishing boat harbor lay the Duyfken. Built in 1999, the Duyfken is a replica of the Dutch ship of the same name. The original Duyfken was built in 1595, and came to what later was known as the Dutch East Indies. In 1605, the Dutch East India Company sent the Duyfken, captained by Willem Janszoon, to search for trade opportunities in the “south and east lands” beyond the furthest reaches of their known world. Janszoon took the ship southeast from Java along the south coast of New Guinea. In early 1606, Janszoon encountered and then charted the shores of Australia’s Cape York Peninsula.  This was the first first authenticated European discovery of Australia.

Not big by any means, carrying sufficient provisions for the long sea journeys made by the original Duyfken would have been a feat in itself.

Well that’s it for my encounter with tall ships in Western Australia.  Last weekend they arrived in Adelaide on their way to Sydney, and where the next post will continue the story.

But to finish, remember I mentioned the deteriorating weather?  After checking out the tall ships, I spent an hour or so in the Maritime Museum at the far end of the Fremantle wharves.  As I emerged, a line of vicious squalls hit the harbor.  This photo was taken just as the squalls hit, with a container vessel entering the harbor.  Excuse the poor photo quality.  It was blowing 45 knots (50 mph, 80 km/h) as I was standing on the exposed far end of the wharves.  Standing still was more than I could achieve and horizontal rain was depositing itself on the end of the lens, despite using a lens hood.  The camera stopped focusing a moment later, confused by the rain on the lens. 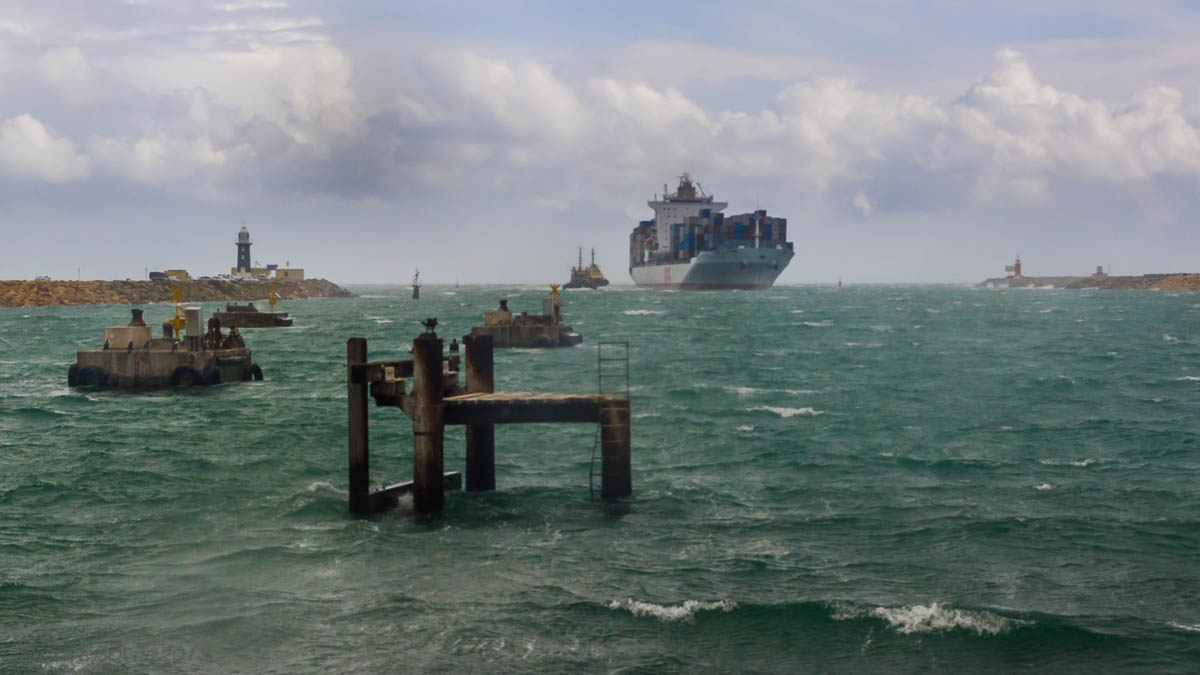 Entering Fremantle Harbor. It doesn’t show up very well, but the wind was whipping up the bow wave’s water into a fine mist in front of the ship. 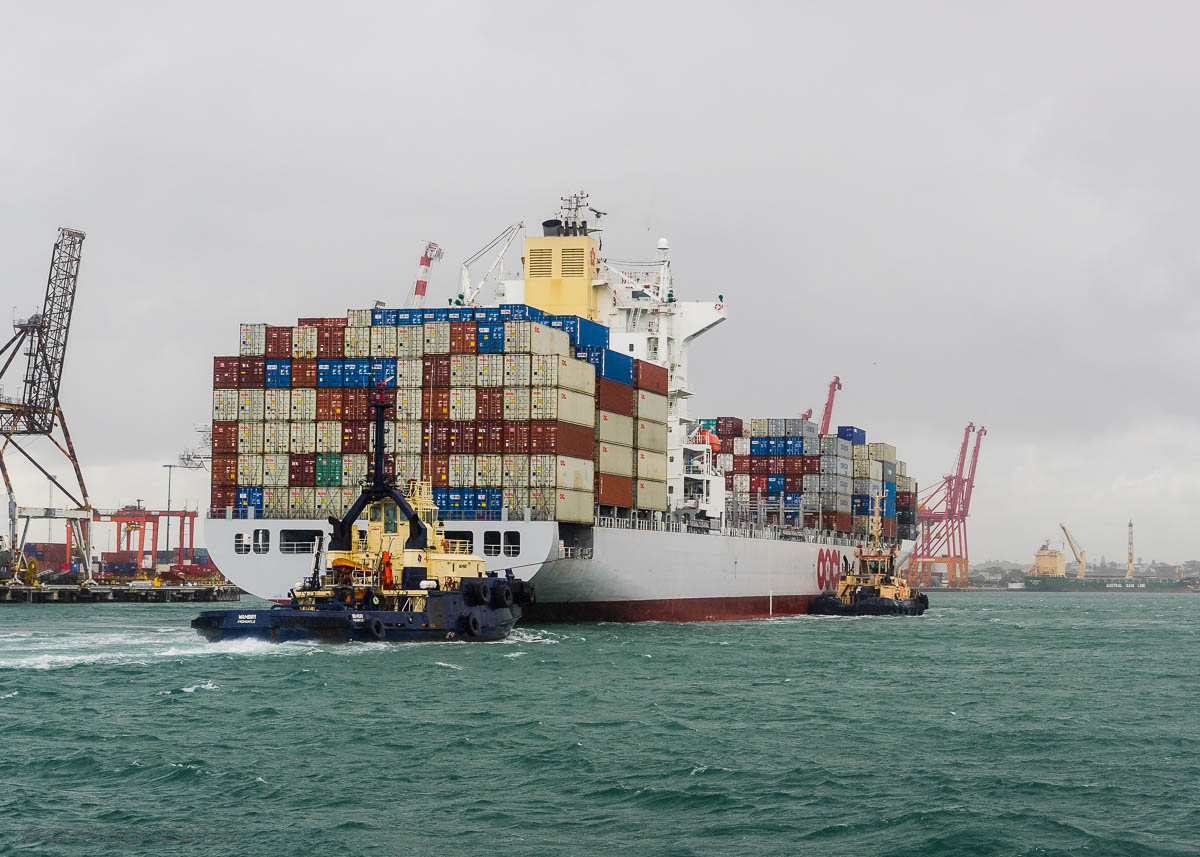 Whoa, I said Whoa! With a 45 knot tailwind, this would have taken a serious application of horsepower to pull up.  I still couldn’t stand still and was being rocked back and forth by the wind.

Links to the ships’ official sites:

And to the The Australian Navy’s International Fleet Review

And where was I?

<—Back to the Photo Morsels home page.

3 thoughts on “Dutch Tall Ships in Australia (The Initial Encounter)”