I hadn’t realised that Stockholm is at the northern end of an archipelago of some 20,000 islands until a week or so before I was due to visit. The archipelago is a popular summertime destination  for both locals and tourists, and an island visit quickly moved onto my “to do” list. Fjäderholmarna is a small group of islands just 20 minutes by ferry from the centre of Stockholm, well served by ferries, and ideal for the time-challenged visitor to make a quick journey out among the islands. My work colleague and I hopped on an early Saturday afternoon ferry on a glorious June day, intending to have lunch over on Fjäderholmarna followed by a bit of a roam about.  Once there I discovered the whole island can be walked around in 20-30 minutes, but packs in a lot of interest. 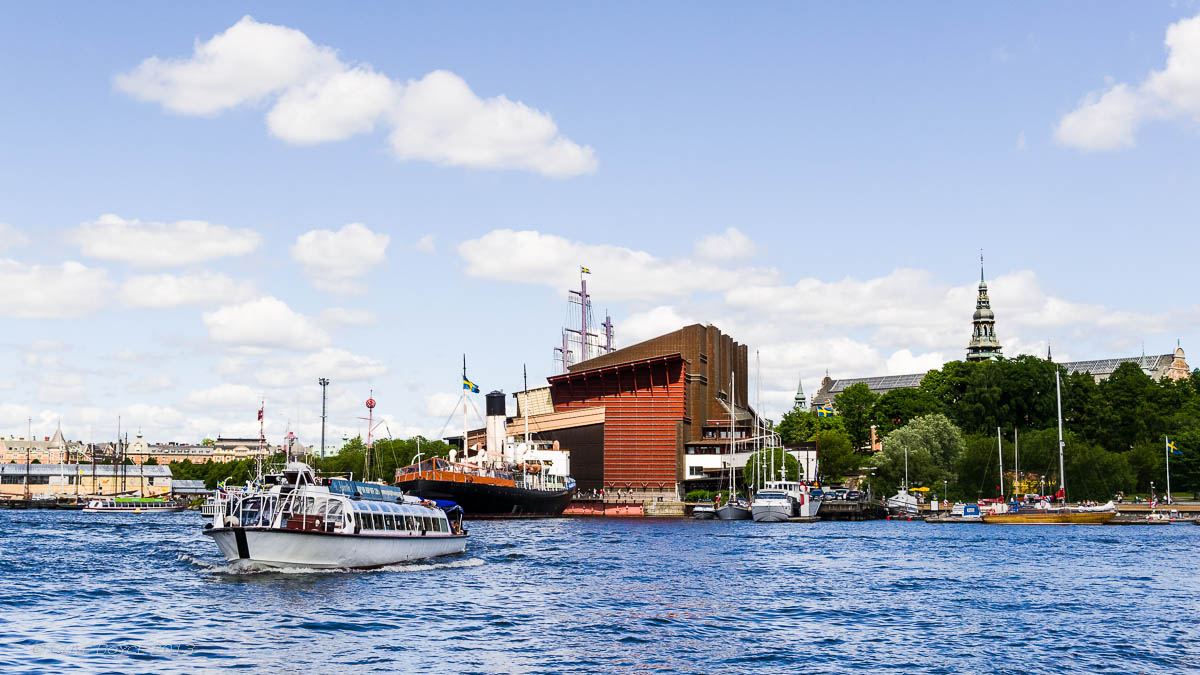 After leaving the docks in the centre of Stockholm, the ferry passes Djurgården island. The large red building seen here houses the Vasa, a 16th century Swedish warship that unfortunately sank on its maiden voyage as a result of some fundamental stability shortcomings. It was re-discovered and raised in the early 1960’s. The ship in front of the building is an retired icebreaker open to the public.

Someone enjoying the weather on a lovely looking trimaran. Historic wind driven mill, with sails and arms now removed, on the right. The mill was built in 1785 to extract oil from linseed.

One of the many ferries plying the waterways.  An old girl, the Gurli dates from 1871.

Approaching the wharf at Fjaderholmarna. We were not going to be alone!

Roda Villan, one of several spots available for lunch. This was one of the quieter locations tucked away at the western end of the island. The little cherub chap to the left is advertising one of the local icecream brands and seemed to make appearances all over the place. 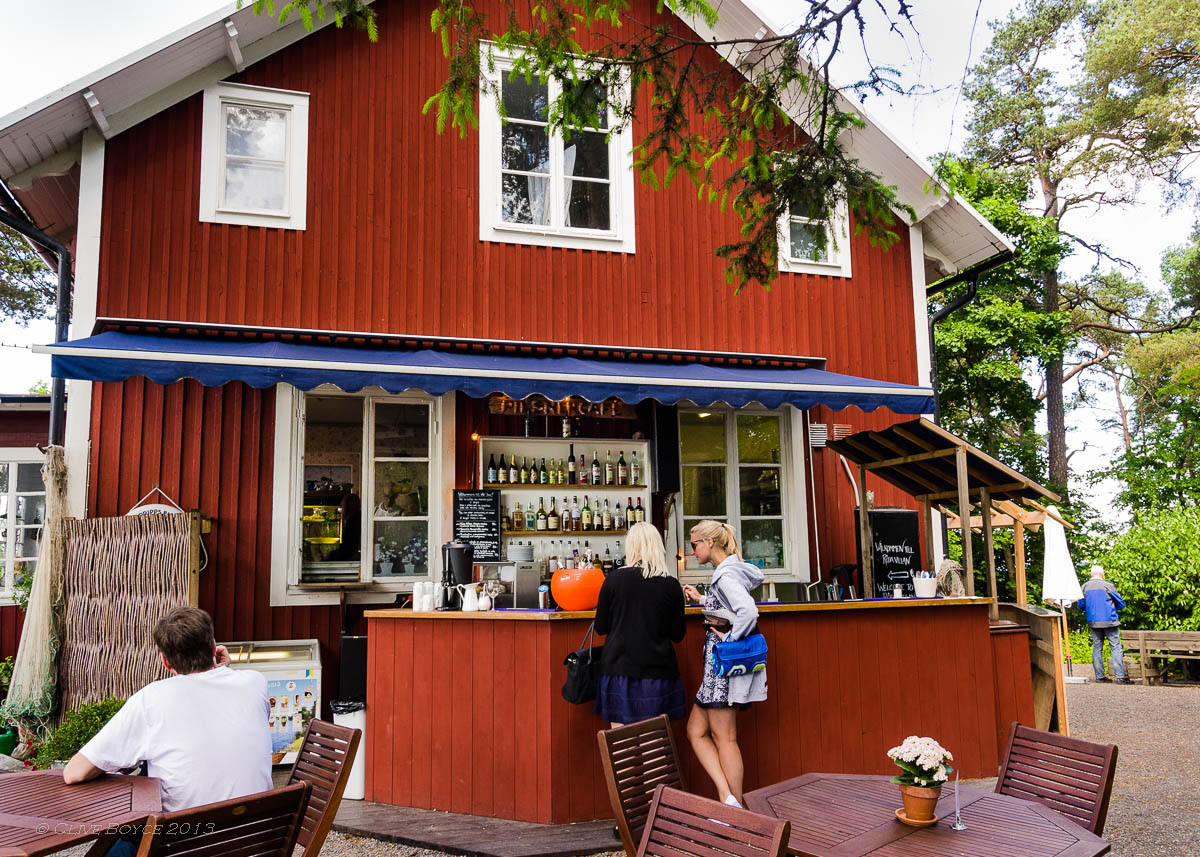 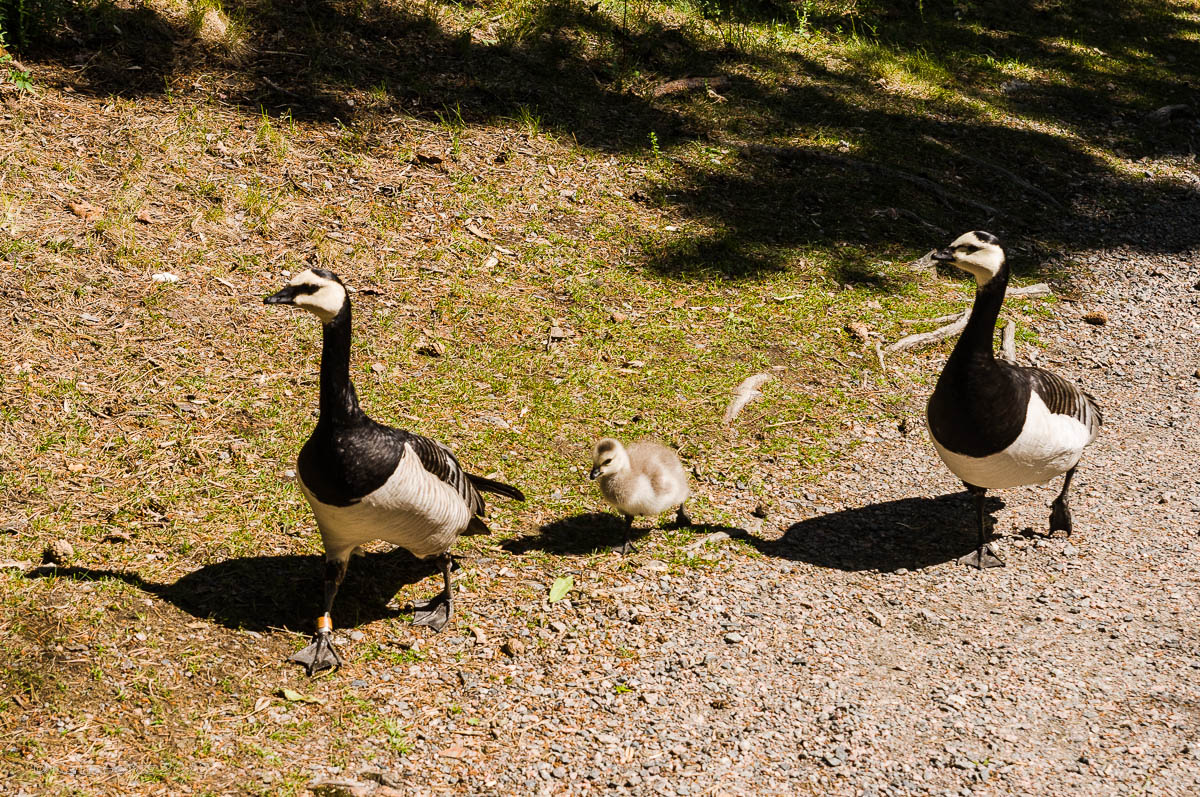 There was no shortage of geese around Stockholm in mid-June. This family strolled right on by, without the slightest concern for the humans walking along the path.

Facing southwest, this cove was a bit of a heat trap.  Add the granite outcrops to hold the sun’s heat, and you have a popular sunbathing spot.  The buildings housed arts and crafts artists and outlets. More geese.

Bofors 40mm anti-aircraft gun guarding the approaches to Stockholm.  My expert knowledge of artillery pieces tells me this is the 1940 model.

Whoops, just gave myself away!

Allmogebåtar, a museum of traditional boats on the eastern end of the island looks to preserve and present the history of the small fishing boats that once worked the waterways of the archipelago. Tar was used to treat the boats’ timbers, giving these typically dark hulls.

Did I mention there were a lot of geese about?  This is your “aah, aren’t they cute” opportunity.  This is the family seen in the prior image between the two dark hulled boats coming ashore. 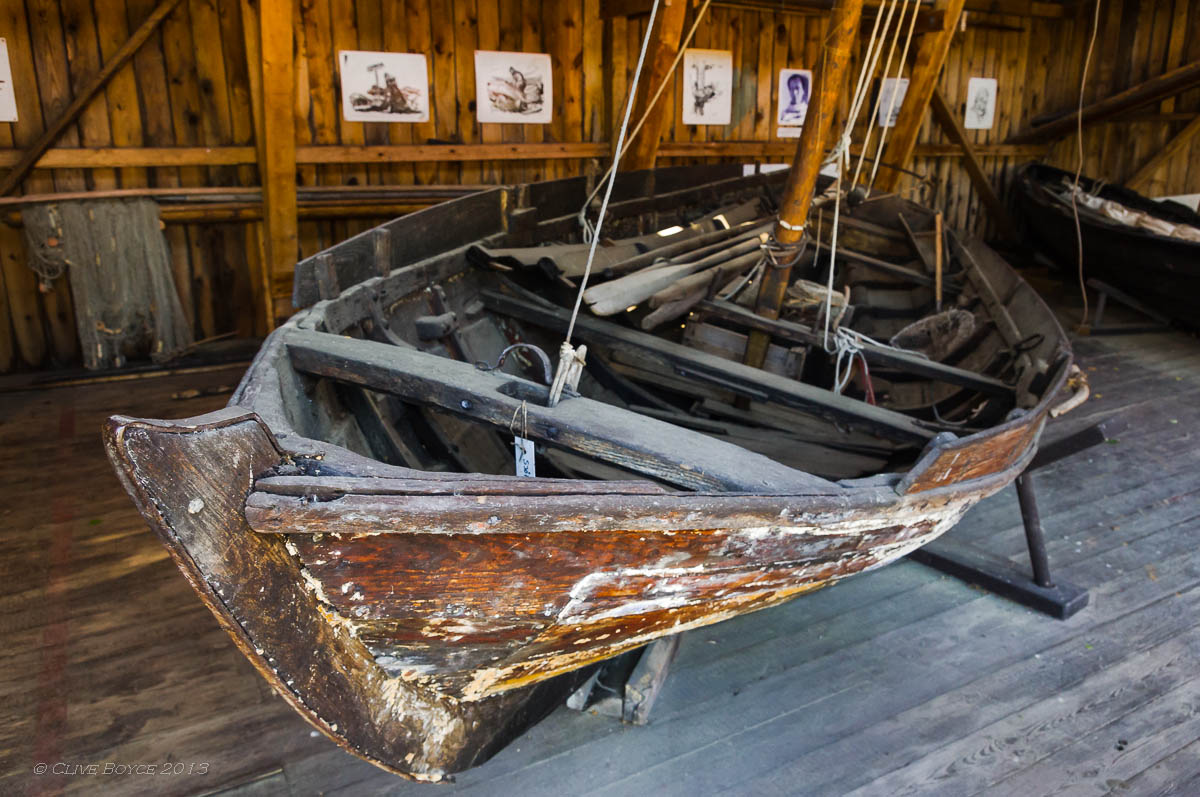 Nothing too fancy in the way of fishing gear, but no doubt served its purpose.

Old inboard boat motor. Looks like it wouldn’t pull the skin off a rice pudding, but probably did its job, and would have sure beat rowing everywhere.

The ubiquitous Seagull outboard was present. Note the age of the outboard in the background – 1916!

Fjäderholmarna krog, one of the more upmarket eateries on the island. Lovely deck at the far end on which to enjoy a beer on a sunny day.

Is beer. Was good. Very good, thank you for asking.

Can’t be near the sea without at least one squawking gull nearby. 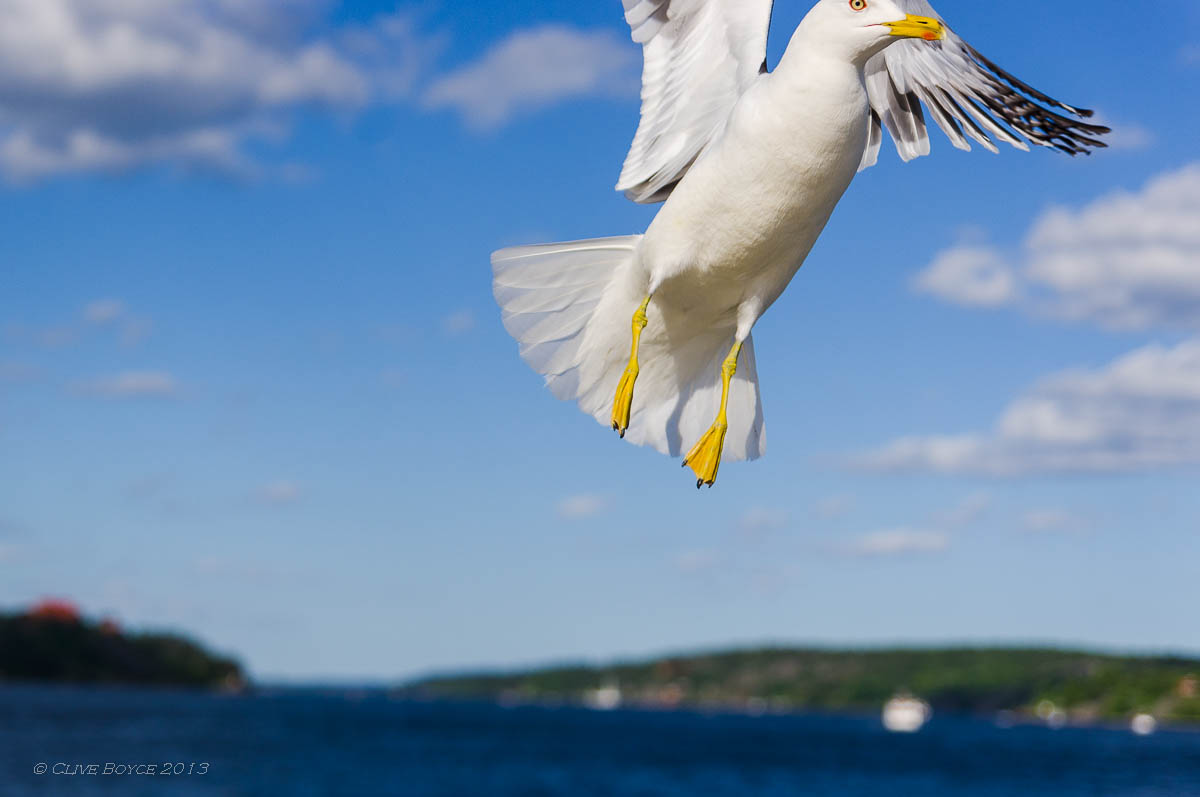 My efforts to sneak up for a closer shot didn’t quite work.

People in the northern hemisphere talk about ‘black swan” moments to describe something that is very unexpected. Sorry, but down in Oz, black swans are all the rage, and white swans are unusual to me.

Conifers come down almost to the waterline. Another beautiful place to chill out.

Fjaderholmarna is on the main shipping channel out of Stockholm, so there is some substantial shipping sharing the narrow channels with recreational watercraft. This cruise boat found it necessary to give five short blasts of its horn as it passed – in nautical signalling, this means “I am in doubt about your action taken to avoid collision”. Or when large ships are in narrow channels, the better translation is “Get out of my way before I mow you down.  Right now!!!” 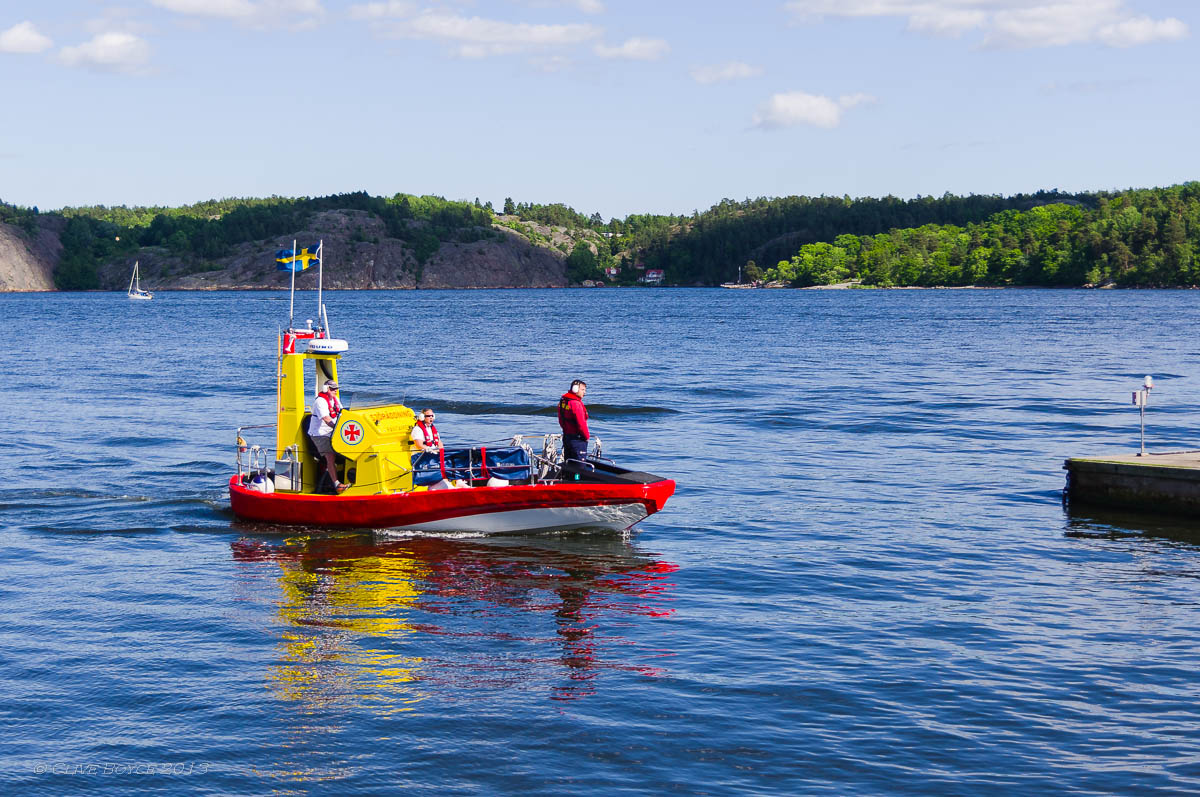 Lots of people mucking about on boats and jet skis means accidents, but the authorities look well set up to respond quickly to incidents.

Another of the historic ferries plying the waterways. Looking at the emissions form the smoke stake, I’d say this one is still genuinely steam driven.

While this one looks to have been converted to diesel. 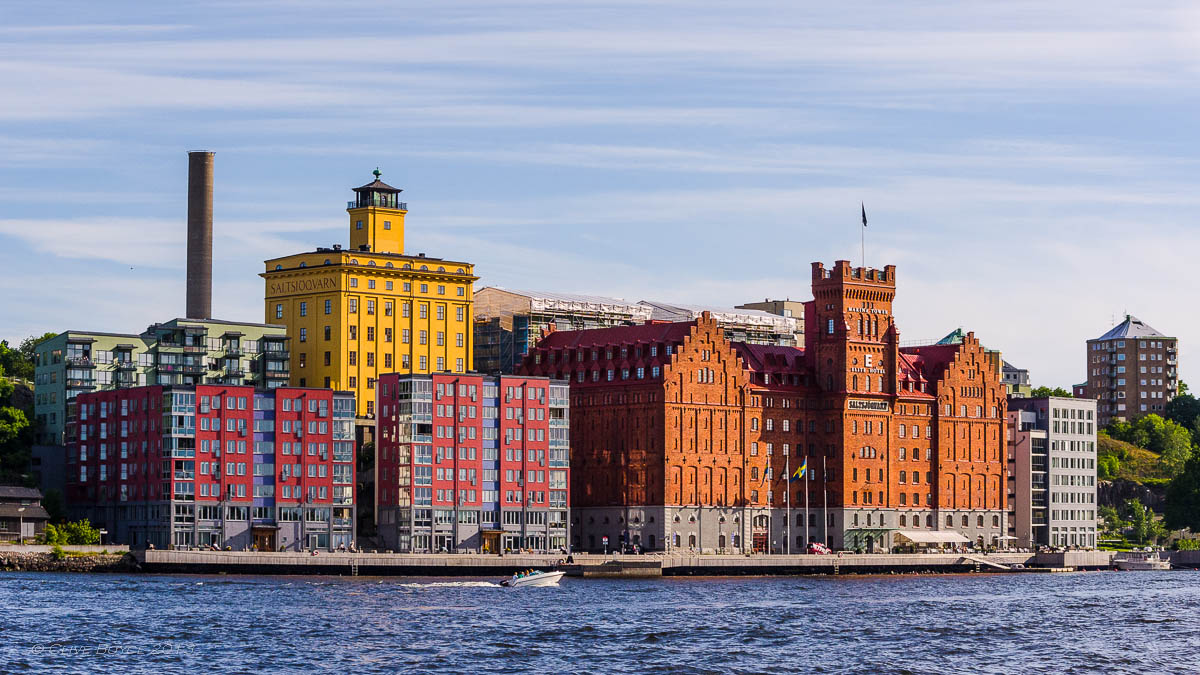 Several ferry companies service Fjäderholmarna, departing from the centre of Stockholm.  For those with more time, there are numerous islands further out in the archipelago that can also be visited.