Back from an overseas work trip, and starting to make  a dent in reviewing and editing the 1200-odd photos taken over the two weeks I was away.  While the work and act of travelling itself keep me quite busy, I also make a very deliberate effort each trip to get out and about after hours and on weekends to discover the places I am visiting.  A large stack of photos is the usual product of this enthusiasm to explore.

Stop 1 on this year’s journey, after a 26 hour flight from Australia, was London. Arriving at dawn on a Saturday morning, the first priority was a few hours sleep to take the edge off the tiredness.  The day’s plan was said quick rest followed by an afternoon ferry ride down the Thames to Greenwich to see the Cutty Sark.

My interest in the tea clippers began way back in the early 1970’s when, as a lad of 12 or 13 I carefully assembled an Airfix model of the Cutty Sark. Around the same time I became an avid reader of practically any book to do with the sea, ranging from the recollections of square rigger sailing ship captains such as Joseph Conrad and Alan Villiers to the autobiographies of early round the world yachtsmen like Sir Francis Chichester.

I had planned to visit the Cutty Sark on an earlier trip, but renovations commenced in 2006 and then she suffered major fire damage in 2007 after an electrical fault.  So a visit was postponed, for quite some time as it transpired.  Repairs took five years and she only re-opened to the public in April 2012. So, with the Cutty Sark’s restoration complete, a visit on my next overseas trip quickly moved towards the top of the ‘wish to do’ list.

From the centre of London, Greenwich can be reached a number of ways, but the most interesting journey is to take a ferry down the Thames from Westminster. The ferry ride is a great way to get a quick overview of central London and, for the nautically interested, there’s plenty of historic shipping and port infrastructure to see along the way, which leads me to the day’s photos… 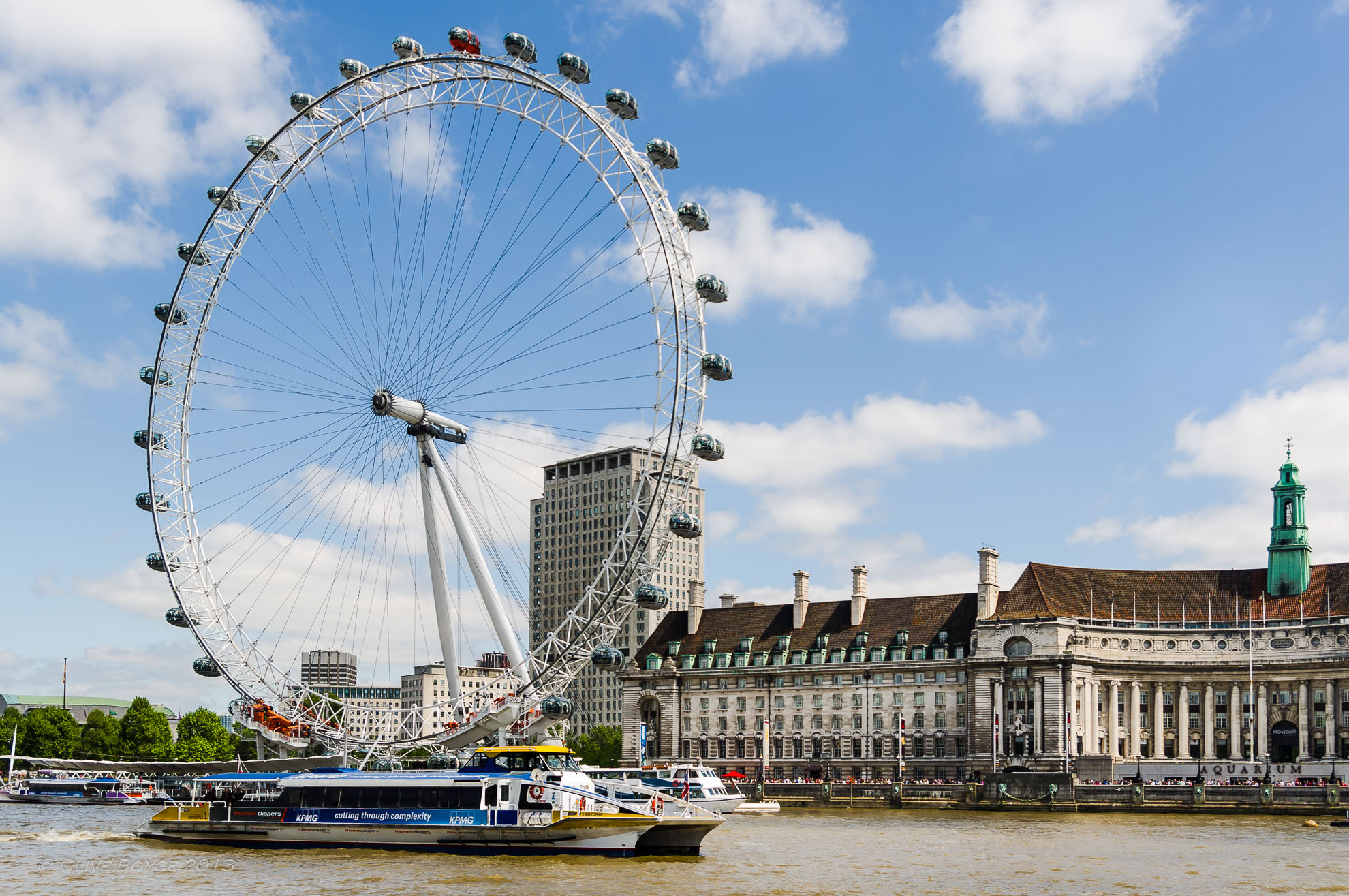 Immediately opposite the ferry terminal at Westminster are the London Eye and London Aquarium. 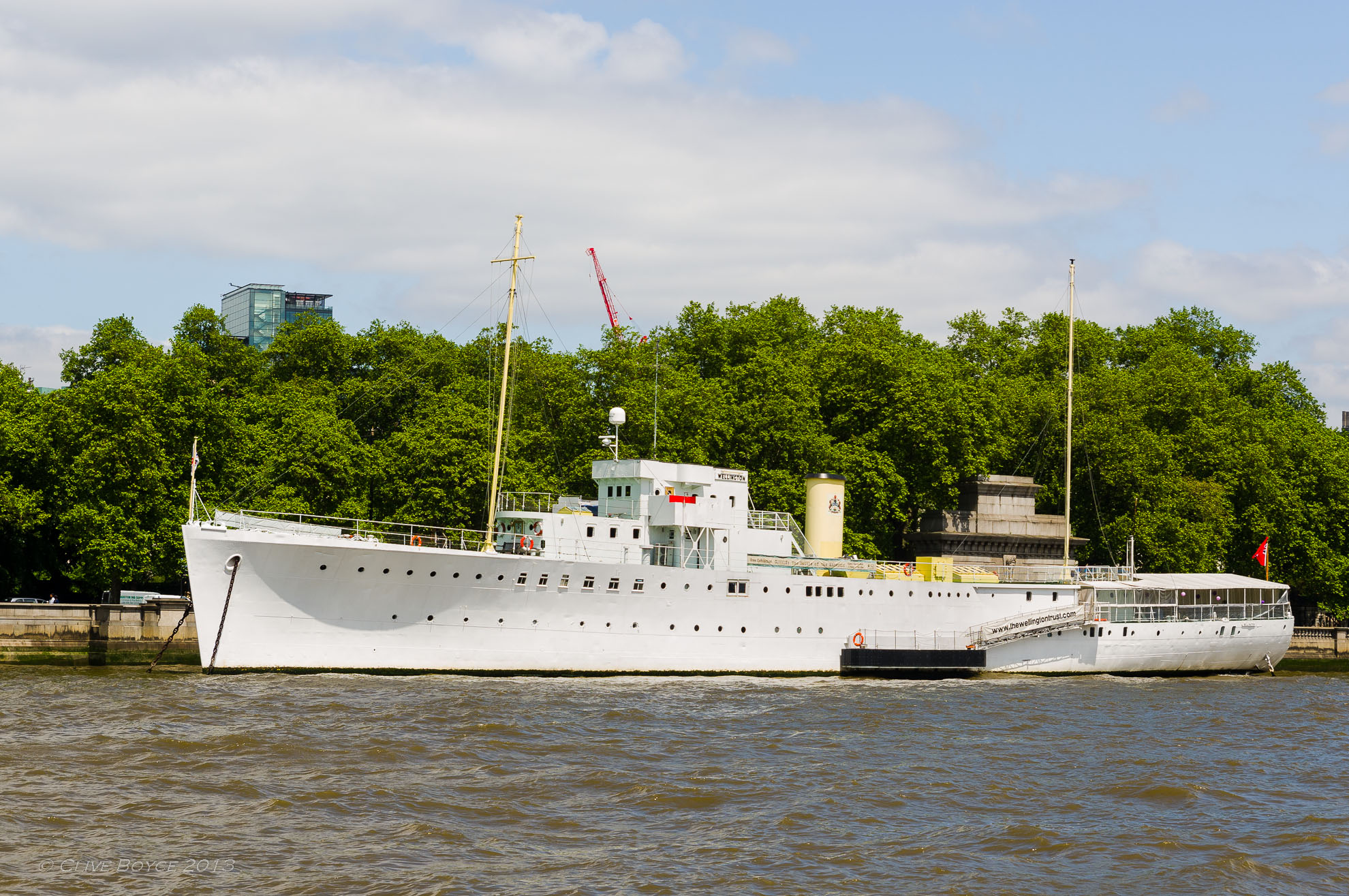 Just downstream from the start of the ferry ride is the HMS Wellington, a WWII-era sloop of the Royal Navy. During the Second World War, she served as a convoy escort ship in the North Atlantic. She is now moored alongside the Victoria Embankment and used as the headquarters ship of the Honourable Company of Master Mariners.  I associate the term ‘sloop’ with a single masted sail boat, but up until WWII, it was also used to designate a naval vessel that fell between a corvette and a frigate in size.

HMS Belfast lies just upstream of the Tower Bridge.  Classed as a light cruiser with 12 x 6 inch guns. she was built just in time for the start of WWII.  After an early unfortunate encounter with a mine, most of her war career was spent guarding Arctic convoys.  Today, HMS Belfast is the last remaining vessel of her type.  Part of the Imperial War Museums, she is open to the public. 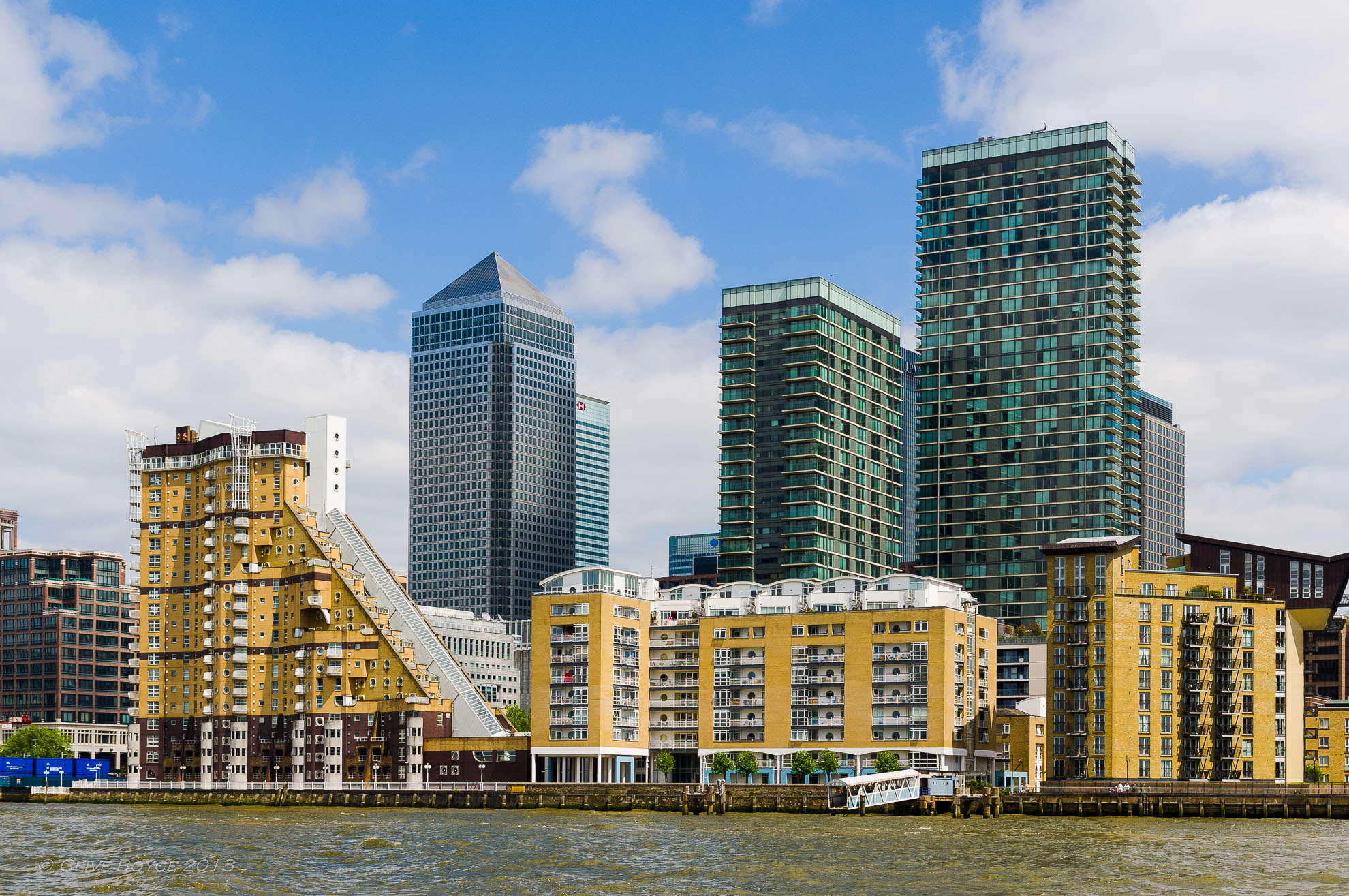 It’s hard to miss Canary Wharf as the ferry heads towards Greenwich.

The ferry trip can be continued beyond Greenwich to see the Thames Barrier, the movable flood protection gates designed to protect London from storm surges coming up the Thames from the North Sea.  But I was somewhat time-constrained, so hopped off at Greenwich.

The Cutty Sark is located in a dry dock immediately to one side of the Greenwich ferry terminal, so certainly isn’t hard to find!

Here she is, on a lovely day in early summer.

The glass canopy around the lower hull has been added during the recent renovations, and has proven to be somewhat controversial.   The benefit is the creation of a very pleasant all-weather space within the dry dock itself.  The downside is that the lines of the ship, an essential part of her character, have become somewhat obscured. 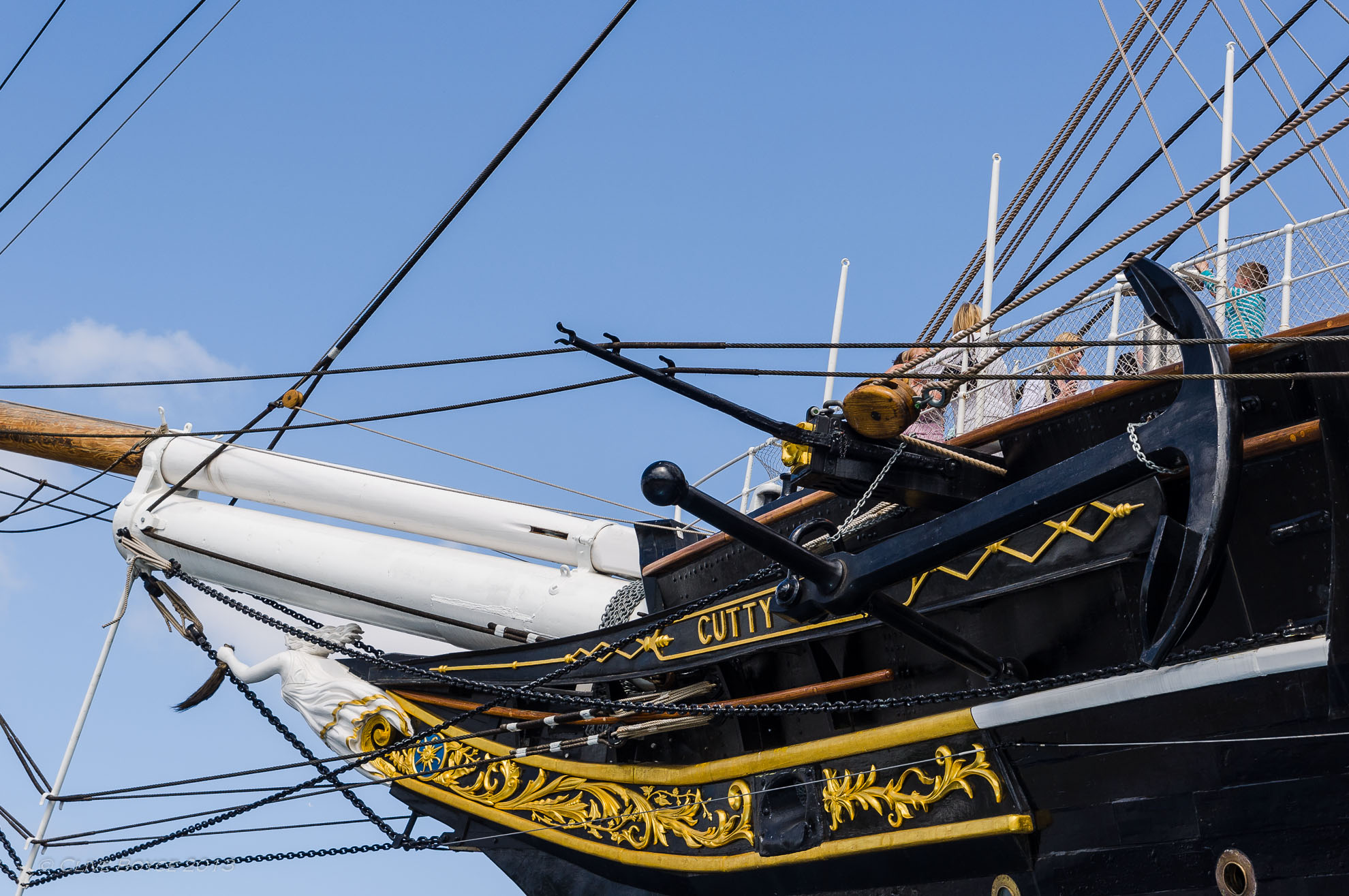 Bowsprint and figurehead of the Cutty Sark.  The figurehead provides the clue to the naming of the Cutty Sark and the intention that the Cutty Sark be the fastest of ships.  A “cutty sark” is 18th century Scots for “short chemise'” or “short undergarment”. Cutty-sark was a nickname given to the witch Nannie Dee, a fictional character created by Robert Burns in his Tam o’ Shanter poem, after the garment she wore. Tam is so enthralled by spectacle of Nannie Dee dancing in her cutty-sark that he cannot contain himself and yells out “Well done, Cutty-sark!”. The witch, alerted to his presence, pursues him.  Tam heads for the River Doon, because, according to folklore, witches cannot cross running water. He makes it across the bridge to safety, but not before a speedy Nannie has torn the tail from his horse.  Now look closely at the figurehead – it’s Nannie Dee with the horse’s tail in her hand.

Now, back to reality.  There is an entry charge, £12 as of mid-2013.  An extra couple of quid will also provide access to the museum areas of the Royal Observatory.  I recommend handing over the extra if the Greenwich Observatory is also to be visited.

Once inside, an opening has been cut in the hull on the starboard side towards the stern. This permits easy access to the hold.

Entry to the Cutty Sark. The cutaway area provides an excellent opportunity to inspect the construction of the Cutty Sark. Lightness equals speed, all other things equal, and this was one of the major design advances of the tea clippers. The Cutty Sark was built in the industrial revolution era, and the ship builders had the ability, for the first time, to use use iron to create a lightweight frame for the ship (the white section in the photo above). The frame was clad in timber sections, per traditional practice. The entire hull below the waterline was then clad in copper sheets. Hulls of ships gather growths of barnacles and weed over time and the drag from a dirty hull is substantial. Ship worm could also invade the timbers, causing structural damage. Copper weathers to form a thin film toxic to marine growth, allowing the hull to remain clean. Today, anti-fouling paints perform the same role.

The hold is given over to displays related to the Cutty Sark’s initial and intended role of bring tea back to England from China.  Fresh tea was a delicacy in 18th century England and ships that could bring the first shipments of a new season’s tea back to England earned a bonus for the trip.  This is what drove the development of the “tea clippers” to be the fastest of commercial shipping.  The term “clipper” derives from the use of the word “clip” to mean moving along at a fast pace, as in “he raced along at a fair clip”. 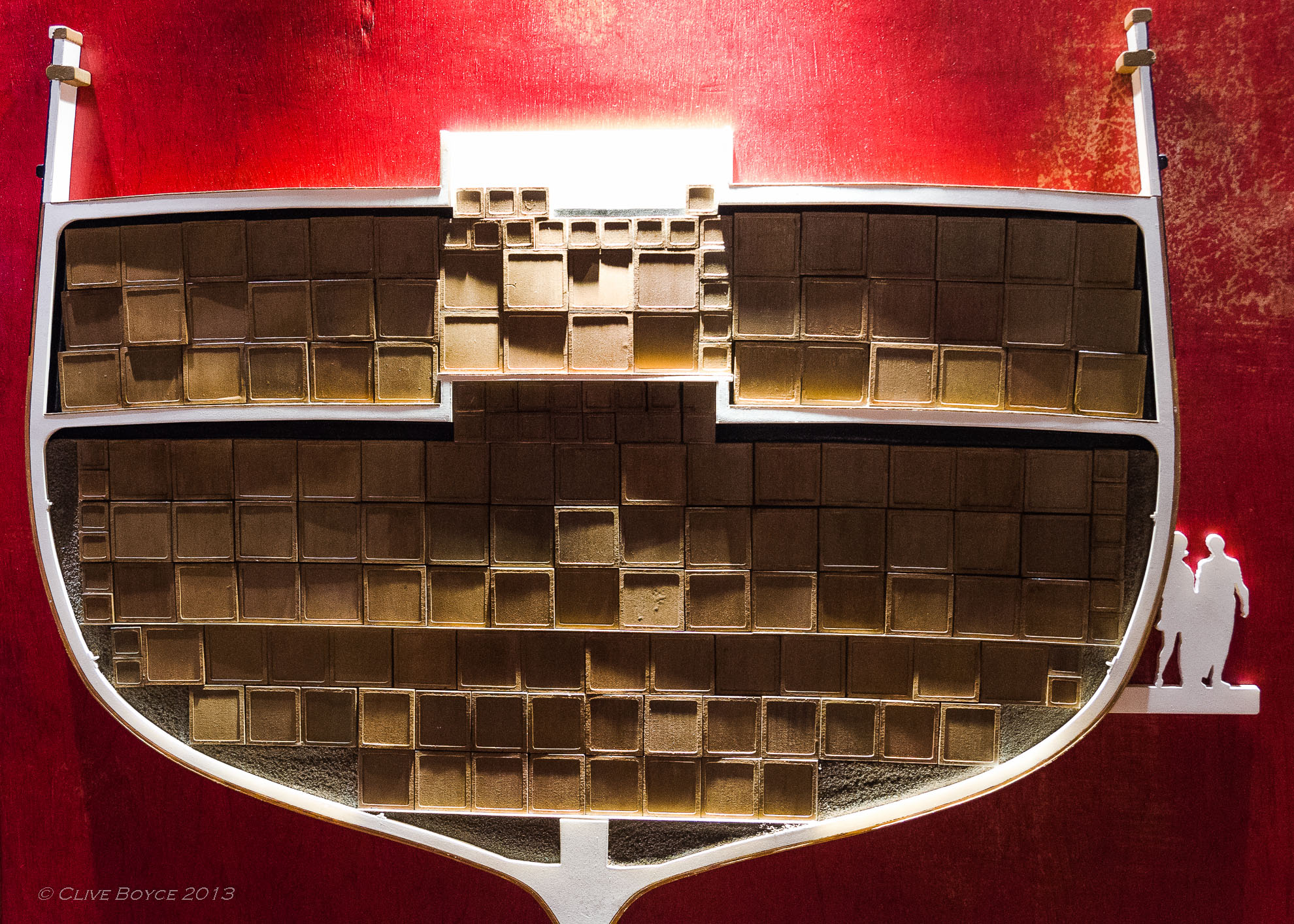 The model above shows how the Cutty Sark was packed with tea chests for the journey to England.  Note how small chests were used at the edges and other places to ensure every available space could carry revenue earning cargo.

Unfortunately, the tea clippers only had a short life on the China tea trade. With the opening of the Suez Canal in 1869, early steam ships could pass through the Mediterranean and the Suez Canal, cutting thousands of miles from the journey via the Cape of Good Hope. Sailing ships could not readily navigate the canal, and found themselves displaced. The Cutty Sark spent only a few short years on the tea trade.

Instead, the clippers turned to the wool trade from Australia. Here the Cutty Sark was the fastest ship on the route for ten years.

Tween deck on the Cutty Sark. The Tween deck is a deck of low height between the hold below and the main (outer deck) of a sailing ship.  The tween deck is largely given over to displays representing the Cutty Sark’s years carrying wool from Australia back to England. 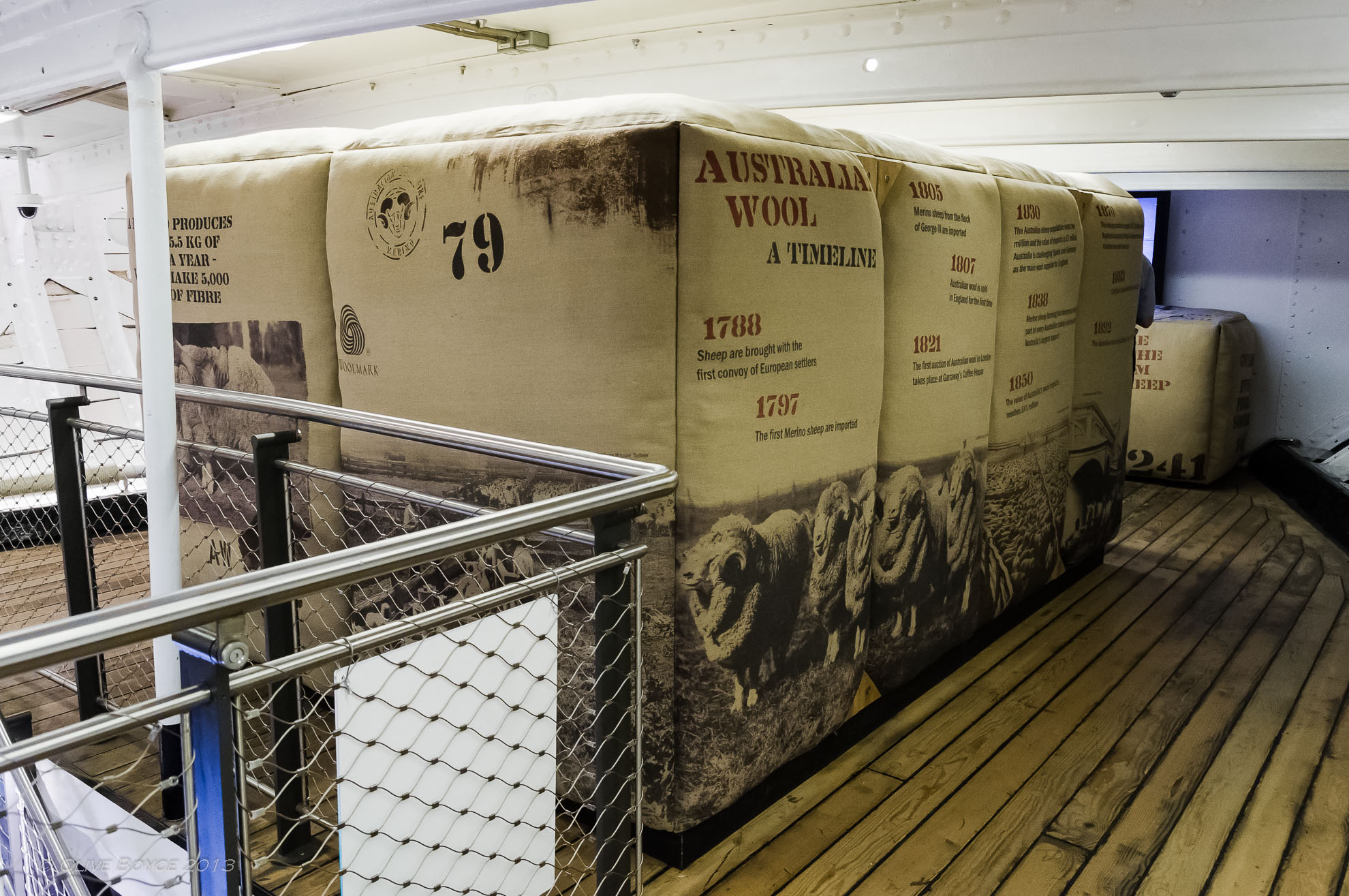 A quick history of the Australian wool industry stenciled on the side of wool bales.

Moving up onto the main deck… 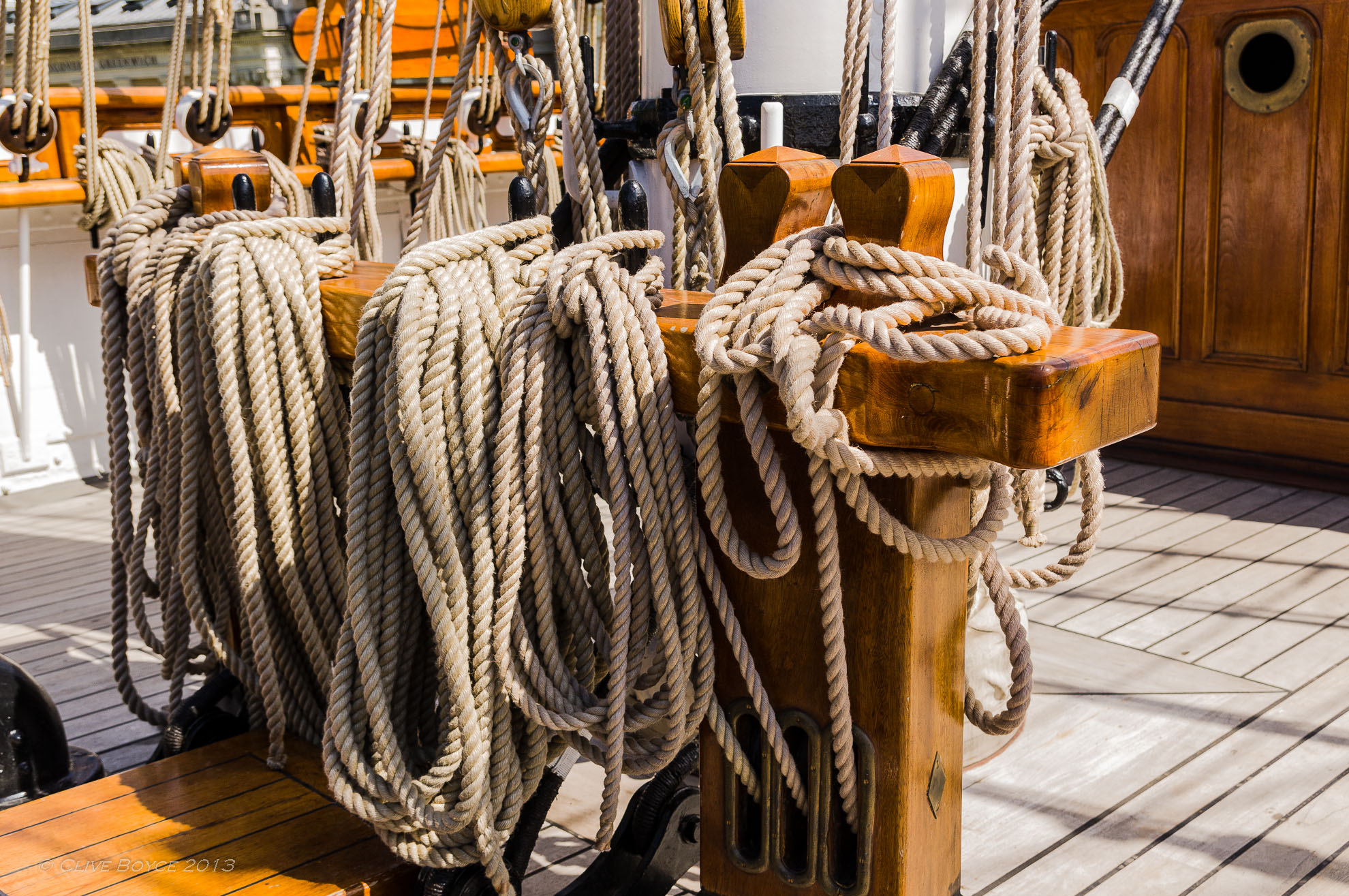 Living arrangements varies from the comfortable to the basic…

Leaving the ship itself, an elevator can take you down to the floor of the dry dock.  From here, the elegant and fast lines of the Cutty Sark can be truly appreciated… 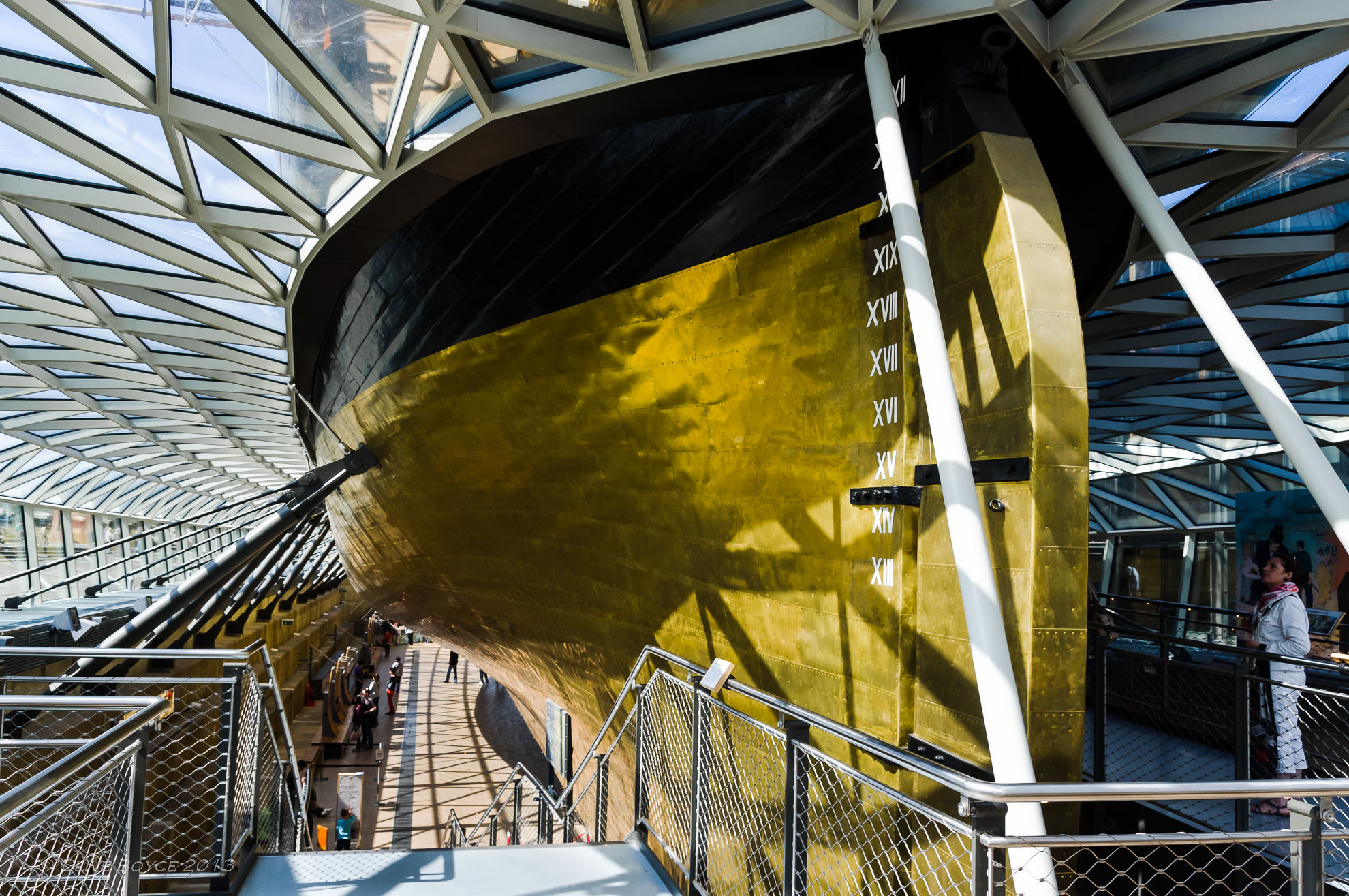 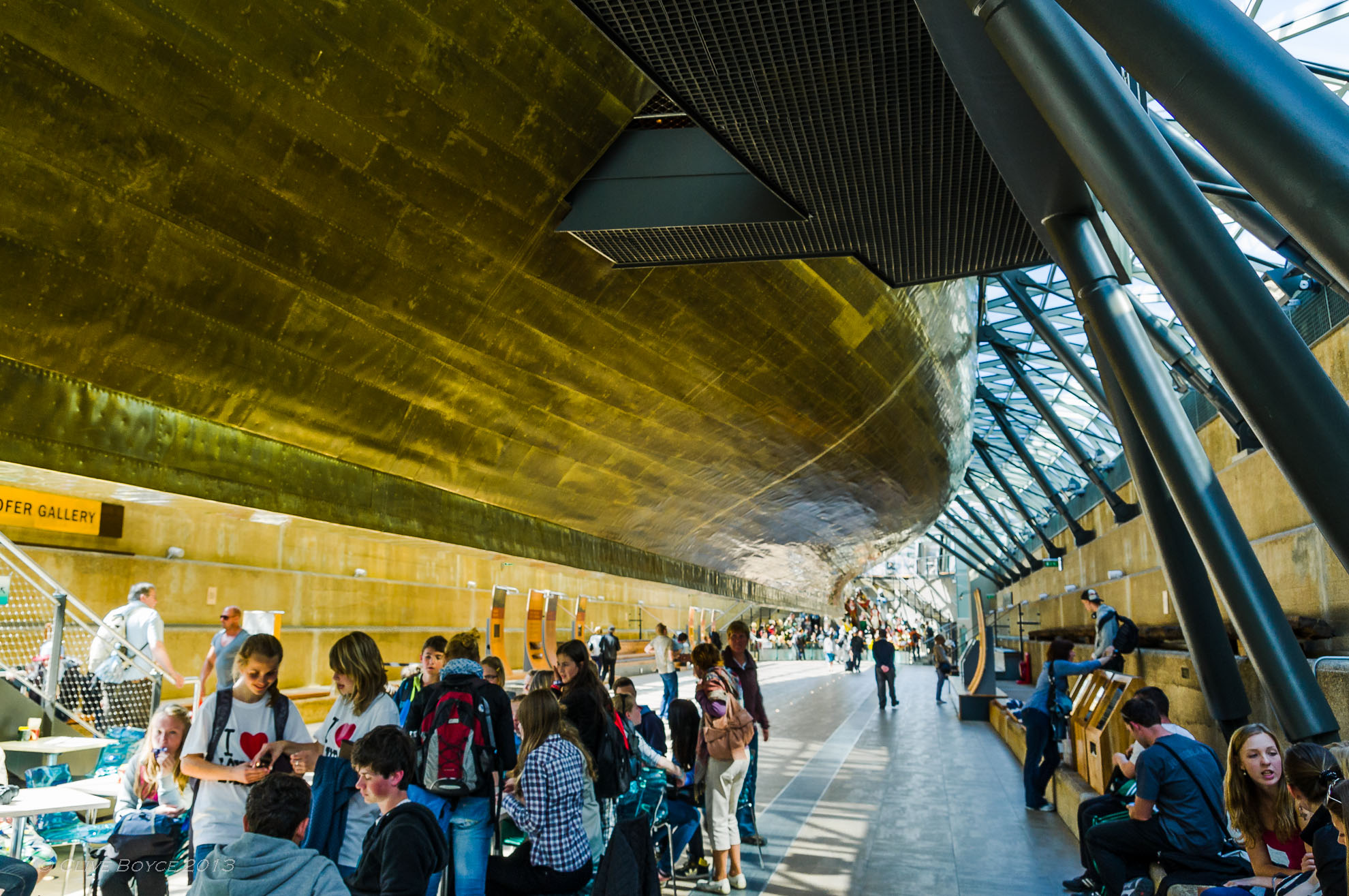 You can even get a drink and a feed down here!

The Cutty Sark exhibit also lays claim to the world’s largest collection of merchant shipping figureheads, seen here lined up at the river end of the dry dock.  The original Nannie Dee figurehead can be seen within the collection.  The figurehead mounted on the Cutty Sark under the bowsprit is a replica.

There’s plenty to see and do in Greenwich and a day could easily be devoted to visiting the area.  In addition to the Cutty Sark, other attractions include:

London is overall pretty flat terrain.  The hill on which the Royal Observatory is located is one of the few elevated locations giving a great view of London.

Official website for the Cutty Sark can be found here.

There are several ferry companies providing services to Greenwich.  The website for the one I used can be found here.  The boat I was on was relatively slow, which was fine given I hadn’t seen London from the river before.  There are other companies offering faster services.

4 thoughts on “The Cutty Sark”