Today’s post is the third and final installment covering a recent visit to the Australian War Memorial, and explores the Memorial’s aircraft displays.  It was these displays that drew me to visit the Memorial in the first place, being something of a closet plane/train spotter.

Before introducing the aircraft exhibits, I would again highly recommend the Australian War Memorial to anyone visiting Canberra. Plan for half a day at a minimum, while a full day would allow most of the Memorial to be explored and appreciated.

The centrepiece of the aircraft displays is a restored Lancaster bomber, G for George, its name derived from its identification code “AR-G”.  Housed in the Anzac Hall, it is an impressive sight.  G for George flew eighty bombing missions over Germany, before being retired from operations in 1944.  This is quite a remarkable achievement when bomber crews were struggling to survive a single tour of duty.  Over 30 of the crew serving on G for George were lost after being transferred to other aircraft.  G for George found its way to Australia in late 1944 to tour the country promoting the sale of War Bonds.

Behind the Lancaster are two large audio-visual screens.  Every half hour or so, a multimedia presentation “Striking by Night” is run.  The presentation combines archival film, audio recordings and light and sound effects to convey some sense of being on a night bombing raid.  While watching, G for George sits there in the shadows in front of viewers, adding a strong sense of connection to the visual images being projected, and making the presentation much more that just another theatrette short film.    The presentation re-creates a night bombing operation over Berlin in December 1943 in which 500 bombers participated.  The film ends by noting that 50 of the 500 planes were lost in that single night.  As the lights go back up, a little maths brought home the stark reality that 50 aircraft lost equated to 350 aircrew not returning safely.  A very sobering thought, and a reminder that in war, the costs are high for both the winners and the losers.

Also housed in the Anzac Hall is the World War I aviation display.  Other aircraft are scattered throughout the Memorial  exhibit areas, being displayed in context of the theatres of war in which they operated.

Photographing the aircraft exhibits presented some challenges.  Firstly, many of the aircraft were rather large in context of the available viewing space, so a wide angle focal length is definitely required.  I mostly ended up using the 35mm film equivalents of 25-35mm local length when trying to photograph entire aircraft.  The second and greater challenge was lighting, or the lack of it, on many of displays.  Avoiding flash photography, I found myself shooting the Tamron 17-50 zoom wide open at ISO 1600, 3200 and even 6400 on one display.  Shutter speeds, even with these settings, were around 1/8 to 1/15 second.  The anti-shake capabilities of my Pentax dSLR proved their worth, with few photos unusable due to motion blur.

So to the planes, starting with G for George.

Avro Lancaster bomber, G for George, the feature exhibit within the Anzac Hall.

Powered by the same Rolls Royce Merlin engines as the Spitfire, note the covers over the exhausts on each side of the engine nacelles. The covers were used to hide the red hot exhausts from the German night fighters. 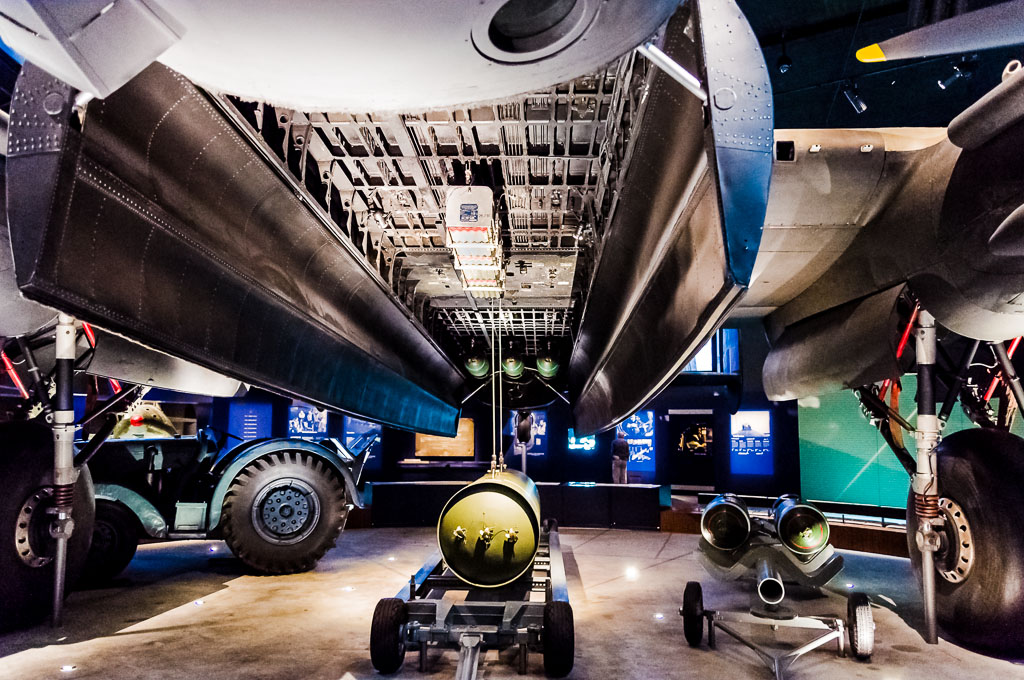 The Avro Lancaster bomb bay was the largest and most flexible space available to the RAF Bomber Command and was adapted to carry a wide range of ordinances, including the Dam Buster skipping bombs.

P-51 Mustang, used by the RAAF in Italy. 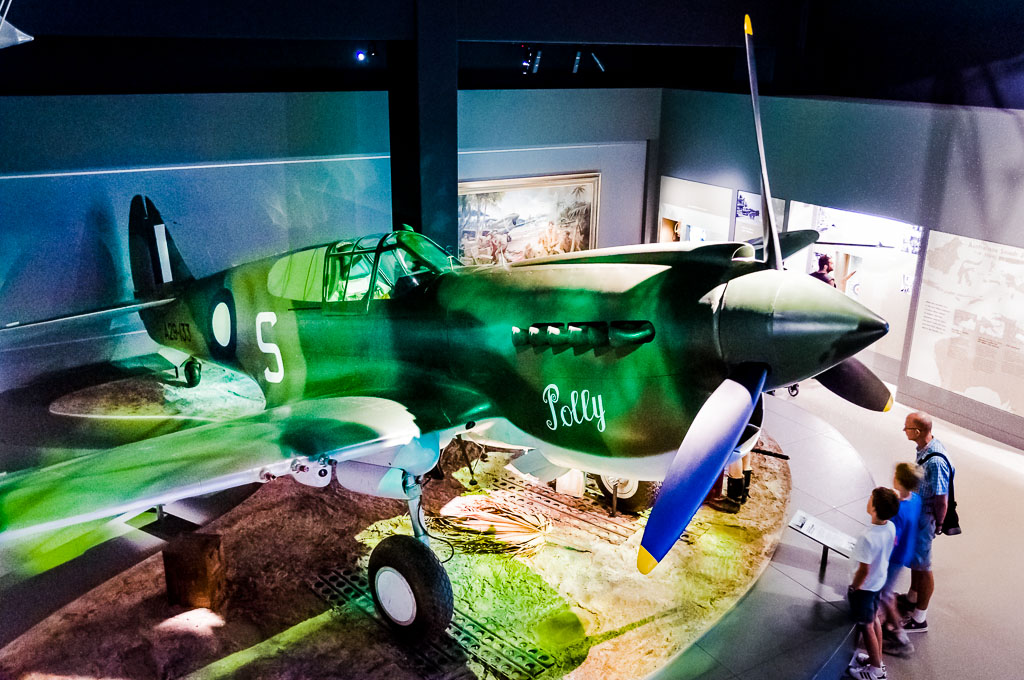 Curtiss Kitty Hawk. Not captured in its true colours due to the display lighting used, and was difficult to photograph due to the low and uneven lighting. 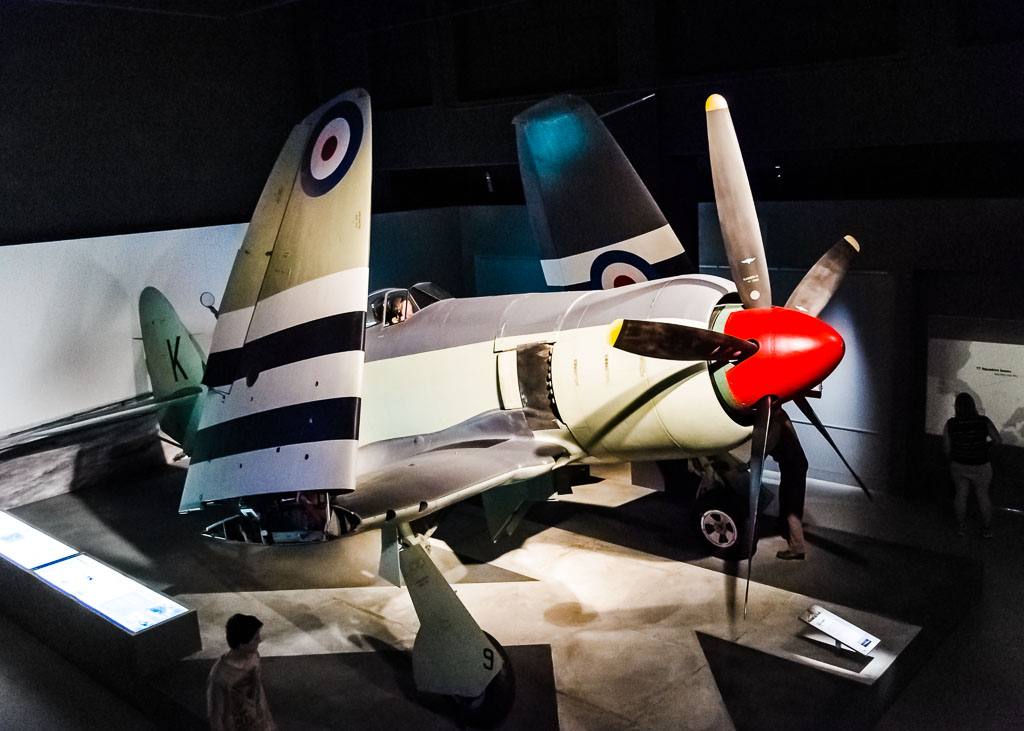 Sea Fury in the Aircraft Hall. Sea Furys saw active service in the Korean War. Note the five bladed prop to cope with the increasing power output of piston aircraft. It was one of the fastest production single piston-engined aircraft ever built, but soon to give way to the jet era.

Meteor Front Fuselage. Start of the jet age for the RAAF and saw service in Korea. Not quite a match for the Chinese MIG-15s, it was reassigned to ground attack duties. Some good light for photography for a change! And did you know that the term fuselage derives from the French “fuseler”, meaning “to shape like a spindle”. No, neither did I until writing this post!

In the Vietnam era exhibit, a Bell Iroquoi presented dropping troops into a field.

And moving all the way back to the First World War…

Avro 504K. Soon obsolete as a front line aircraft, it came into its own as a pilot trainer.

Get your albatross, well a German Albatros D.Va anyway. One of only two surviving examples in the world. 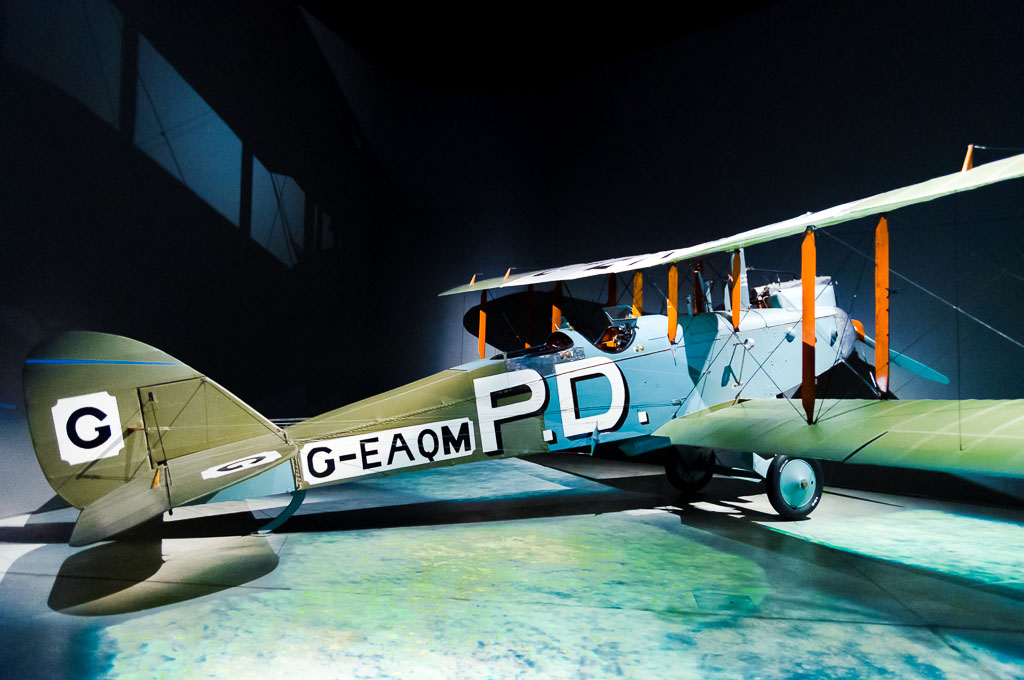 Airco DH9 bomber. This aircraft was flown to Australia as part of the 1919 England-Australia air race. One of only two aircraft to complete the distance, it took an epic 206 days for the journey. Needless to say, it came second.

And that completes the series, thanks for viewing.