Continuing on from the post introducing our recent visit to the Australian War Memorial, we now move into the Memorial’s museum area, which houses an extensive collection of war related relics and interpretive displays.

Over the years, Australia has accumulated an historically significant collection of war related items, but the collection lacked a permanent venue for public display until major works in the 1980’s and 1990’s added the side galleries and the Anzac Hall to the original Memorial building.

The curators of the museum deserve great credit for what they have achieved.  The story of Australia’s participation in armed conflicts is exceptionally well presented, and exhibits provide broad overviews of each conflict as well as very personal insights using individuals’ stories and items they carried or fabricated. Exhibits are categorised by individual conflicts/theatre of war and deliver an easily followed chronological progression spanning early colonial involvement in events like the Boer War (1899-1902) through to the still current involvement in Afghanistan.

Significantly, the exhibits do not seek to glorify war or present judgmental opinions about those we fought against.  More they strive to impart a clear sense of the life, challenges, and dangers faced by active service person in the conflicts Australia has been involved with.

Photography-wise, the exhibits presented quite a few challenges.  I chose to snap away using just the exhibition lighting to avoid flash lighting disturbing others, and because some of the displays were simply too large for a single flash to properly illuminate.  Some of the exhibits were quite dark or lit with spot lights. This enhanced the moods and interpretative themes the curators were attempting to invoke, but forced the use of high ISOs (1600, 3200 and even 6400 on occasion); required care not to burn out to white the spot lit sections; and was a bit of a nightmare for white balance management.  As a result, I would not call my images particularly good from a technical perspective.  However, the fact that they worked at all was pleasing.  The Pentax K-x I used is pretty well regarded for good performance in low light, and allowed me to correctly expose for the highlights and leave the shadows to do their own thing, expecting I could recover poorly lit areas once I loaded images to a computer for editing.  The wide aperture of the Tamron 17-50 F2.8 lens was also a great assistance.  I would have really struggled with a slow kit lens and a camera with poorer low light performance.

So bear those qualifications in mind when browsing through the following images, which show just a fraction of the Memorial’s exhibits.

A Turkish defender and artillery piece in the Gallipoli display area. The Gallipoli display includes a three dimensional model of the Gallipoli battle zone. I was aware that the Gallipoli landing site was challenging due to the hills behind the landing beaches, but the model starkly brought home what a miserably difficult task the Australian and New Zealand forces has been assigned. It would be hard to imagine a worse landing site to try to break out of. Unfortunately I managed to mis-focus my photo of the model, so you’ll just have to visit to see it for yourself. 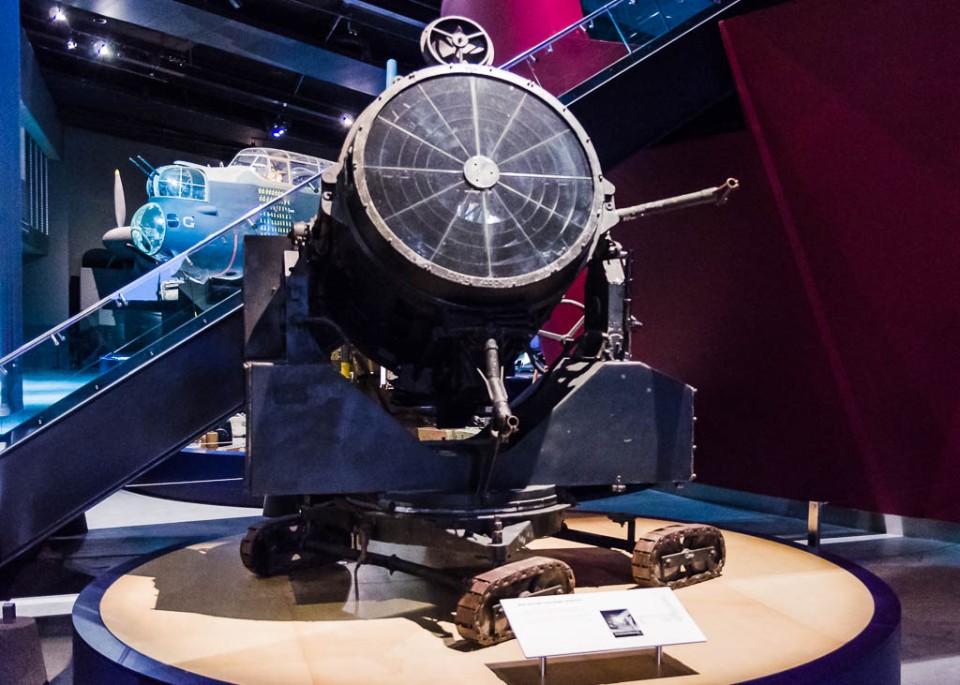 Japanese Midget Submarine. The display is a composite of the two submarines recovered from the floor of Sydney Harbor. Here we are looking at the bow and the two torpedo tubes. The submarine is somewhat larger than I imagined it would be. The raid’s third submarine remains sunken on the ocean floor outside Sydney Heads and was only located in 2006. Recognising the incredible challenges and bravery in making such a raid so far beyond the Japanese front line, the crew recovered from the submarines sunk in Sydney Harbor were buried with full naval honours. The crew of the third submarine remain undisturbed in their sunken vessel. 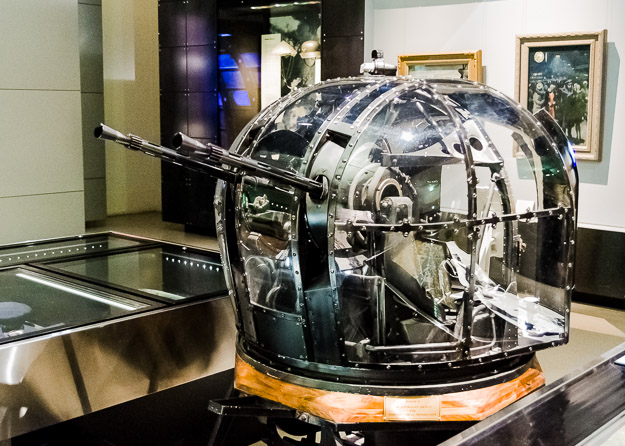 German WWII “Bouncing Betty” anti-personnel mine. Filled with 350 ball bearings, it jumps to around four feet above the soil on initial activation, then a second detonation scatters the ball bearings in all directions. Not a very nice thing.

Modified Jeep used on the Burma railway after the line was taken by Allied Forces. The jeeps were used to push goods wagons in the absence of any functional locomotives. 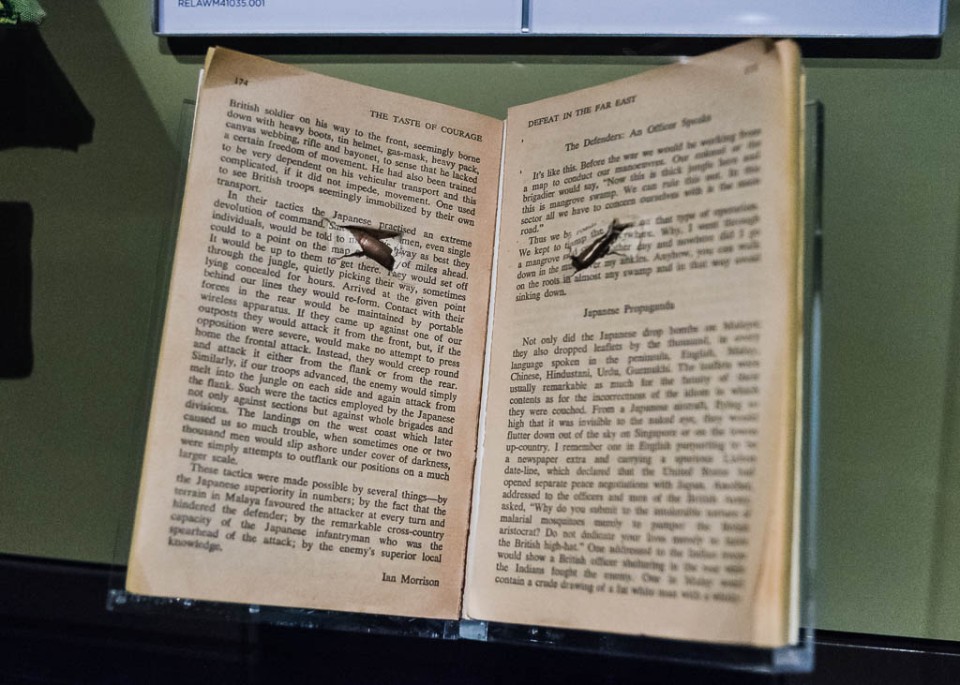 Example of some of the personal items collected by the Memorial. This book became much more valuable to its owner than just a source of reading material. Yes, that’s a bullet lodged among the pages. 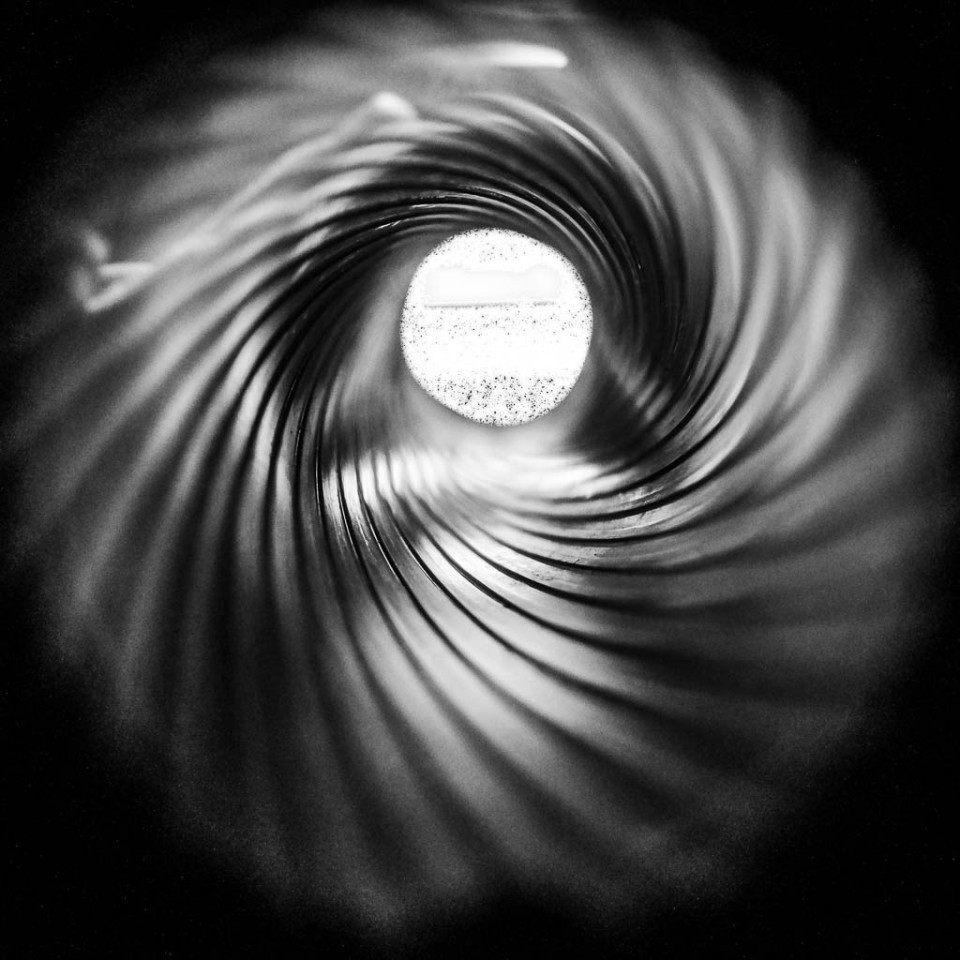 Looking down the barrel at the rifling of a short 25 pounder, a WWII field artillery piece modified to be broken down for relocation in just a few minutes. Used in New Guinea during WWII.

The Iroquois helicopter is synonymous with the Vietnam War and is displayed here dropping off soldiers in a clearing. Known to Americans as the “Huey” which was derived from its model designation “UH”.

The Long Range Patrol Vehicle (LRPV) is a six wheeled patrol vehicle used by the Australian Special Air Service Regiment (SAS) in Afghanistan. The right hand side of this vehicle has been somewhat modified by an incident with a land mine.

And coming in Part 3, an exploration of Australia’s war time aviation history.